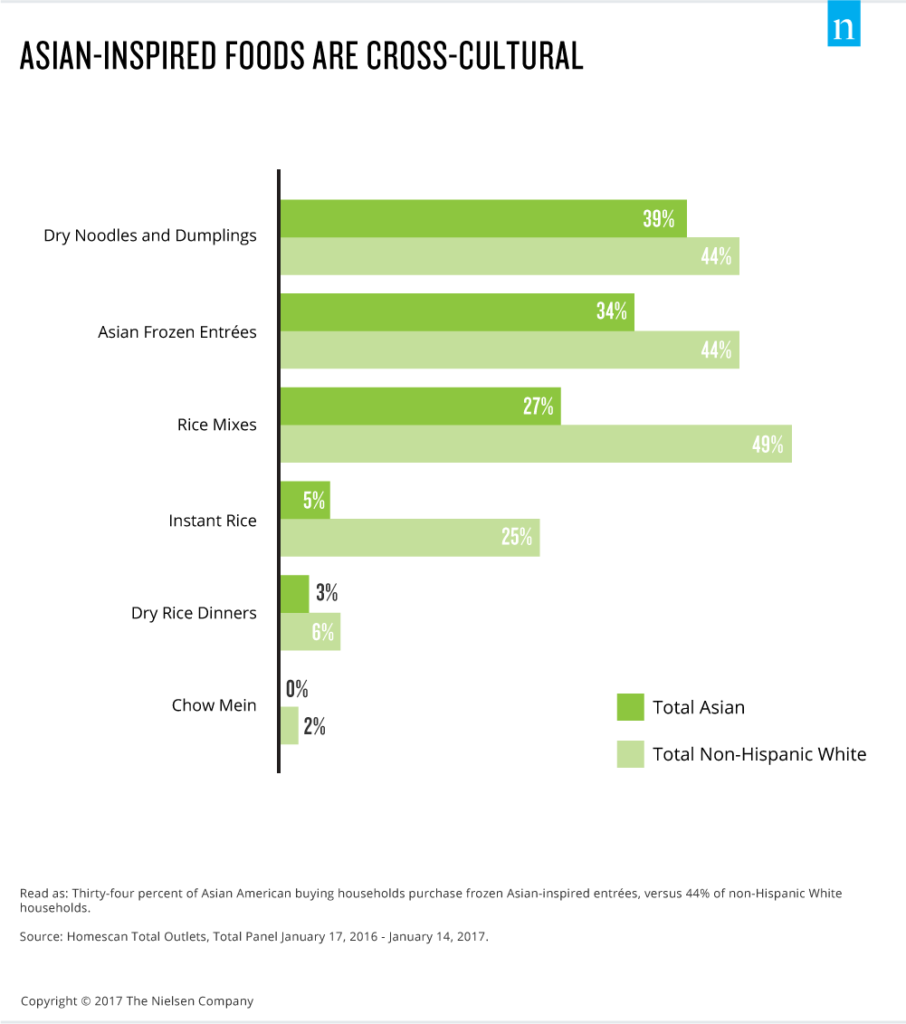 Asian American influences are having a profound and recognizable impact on the country’s mainstream culture. At the helm of this influence, are Asian American women.

Digitally Fluent with an Intercultural Mindset, Nielsen’s fifth report on Asian American consumers in its Diverse Intelligence Series, details the rapid growth and expanding power of the Asian American female population. And one trend explored in the report where Asian American women are leading the way is health and wellness.

As a result, they’re focused on health and wellness in both the grocery and beauty aisles.

While at the grocery store, Asian American women often look for items that will align with their healthy lifestyle preferences.

Fifty percent agree that they regularly eat organic foods, which is 27% higher than non-Hispanic white women. As further evidence of the desire to eat healthy, Asian American households spend 16% more total dollars on average in the fresh produce department relative to non-Hispanic white households. And they purchase and spend more on items such as fresh kiwi, mushrooms, spinach and sprouts.

Asian food products, once only available at Asian specialty stores, are also becoming more prevalent in major grocery aisles. The Asian influence on mainstream U.S. is apparent, as some products inspired by Asian flavors are seeing higher popularity among those not of Asian heritage.

This trend is expected to continue as other races and ethnicities in the U.S. develop more discerning tastes and the country’s populations continue to become more multicultural.

Another trend that is becoming popular in the U.S. are K-beauty products. K-beauty is a shortened term for South Korean skin care, makeup and bath/body products, as well as signature skin care regimens, often times incorporating as many as 10 or more steps.

Asian American women and their use of social media (such as YouTube) and other digital platforms (blogs) has aided in the rapid adaptation of K-beauty in the U.S. The social posts of passionate consumers of K-beauty products and regimens gained traction and buzz in mainstream beauty publications.

The buzz around K-beauty led to these products being made available on the shelves of popular big-box retailers, drug stores and beauty retail stores. Now, these products have mainstream loyalists of all ages, races and ethnicities.

Yoga as an exercise became popular in the 1980s in the U.S.; however, it dates back to the early 1900s, arriving from Eastern Asian Indian culture. Fast forward to present day, more than 36 million people practice yoga, which is now a $16 billion industry (Source: 2016 Yoga in America Study, Yoga Journal and Yoga Alliance).

Additional highlights from the report include: