Police in the Texas city of Fort Worth is investigating an incident in which a white police officer shot and killed a black woman as she sat in her home playing video games with her young nephew.

The shooting of 28-year-old Tatiana Jefferson came less than two weeks after a white police officer in another Texas city, Dallas, received a 10year prison sentence for the fatal 2018 shooting of a black man in his apartment, which the officer had mistaken for her own.

The Fort Worth incident sparked immediate protest in that city of nearly 900,000 and fueled fresh anger in black communities across the country after a series of police shootings of African-Americans.

Several hundred people took part in an emotional vigil Sunday in Fort Worth to honor Jefferson and to protest the police action, the Fort Worth Star-Telegram reported.

Some shed tears, while others cried out in anger.

The shooting took place in the early hours of Saturday after a neighbor called the police to report that a door in the Jeffersons’ house had been ajar for hours. 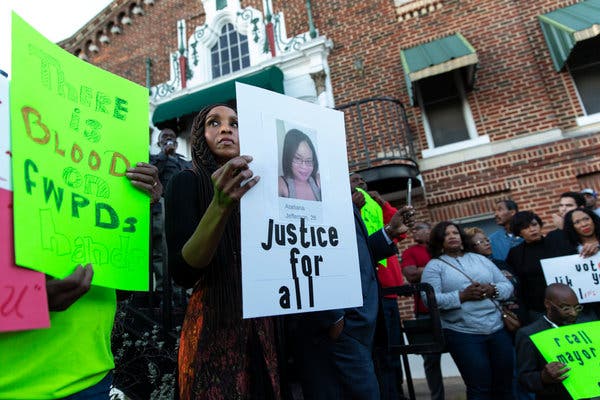 As seen on the body-camera video released by police, two officers with flashlights walked around the perimeter of the house before seeing “a person standing inside the residence near a window,” according to a news release from Fort Worth police.

“Perceiving a threat the officer drew his duty weapon and fired one shot striking the person.”

The officer, who has not been named but who was identified as a white man with the local police since 2018, “did not announce he was a police officer before shooting,” Lieutenant Brandon O’Neil, a police spokesman, acknowledged during a news conference.

In the body-cam video, the officer is heard saying — so rapidly that the words almost run together — “Put your hands up, show me your hands.”

The words are followed immediately by the sound of a gun firing.

The victim ‘s eight-year-old nephew was in the room with her playing a video game at the time of the shooting, said a family lawyer, Lee Merritt. 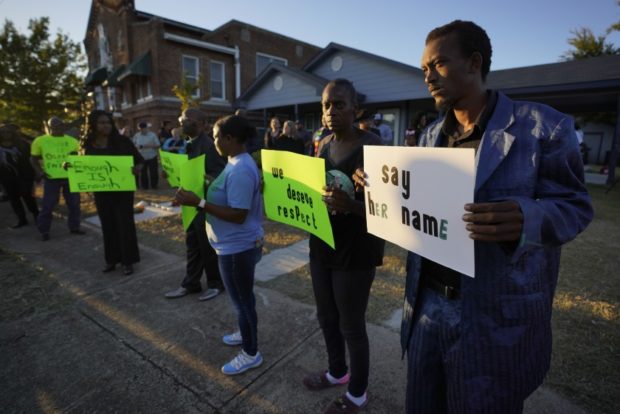 Jefferson, a college graduate who worked for a pharmaceutical company, died at the scene.

Merritt said Jefferson had heard sounds in the backyard and walked toward a window when she was shot.

A GoFundMe page organized to help the family with funeral expenses said Jefferson’s mother had been ill and Jefferson was “home taking care of the house and loving her life.”

“There was no reason for her to be murdered.
None.
We must have justice.”

Take it to the Streets

The Fort Worth police statement said the department “shares the deep concerns of the public and is committed to completing an extremely thorough investigation.”

It promised to provide the public with “transparent and relevant information.”

The police officer involved was immediately suspended and was to be questioned Monday.

Mayor Betsy Price told reporters she would be hiring an outside agency to launch a separate investigation, the Star-Telegram reported.

The newspaper said Fort Worth police had shot at least seven people — six of them fatally — since June 1.

It quoted one speaker at Saturday’s vigil, local pastor Michael Bell, as urging people to “Take it to the streets.

“We’re not hugging them and giving them a Bible,” he said.