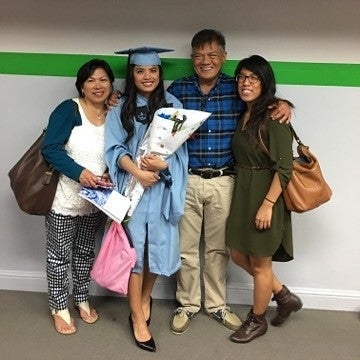 The Telebrico family, from left, Marilyn, Noelle Lyn, Ronilo and Danielle Marie. The photo was taken during Noelle’s graduation in Columbia University last May 17. CONTRIBUTED

“Our closest family friends and neighbors who were nurses in the US inspired me to become one,” says Marilyn Golo-Telebrico, 60, nd an ICU/Trauma nurse in Rowland Heights, California.

After graduation at the University of Santo Tomas in Manila on 1978, Marilyn worked for a year in UST-Charity Ward Hospital as a staff nurse.

“My salary was meager that it could not keep me afloat until the next payday. I still had to split the apartment rental in Manila with my eldest brother,” Marilyn recalls.

Better life in the US

Although their parents, Rose and Tomas were government employees, Marilyn knew her responsibility to help them send her younger siblings to the university. This prompted her to find a better life in the United States.

Marilyn applied at the recruitment agency that sent her former co-workers to the US. The processing took six months. The recruitment fee was payable in the US once she was employed, but all the papers and logistics used were reimbursed to the agency by the recruit. Marilyn came to US via the fly now/Pay later program of the Pan-American Airways.

Nursing in the United States

In 1948 the American Nurses Association initiated an Exchange Visitor Program due to the growth of the hospital sector in the ‘50s and ‘60s. Many hospitals across the United States under the program sponsored nurses for work and study. The first wave of nurses came from Europe and later in the Philippines. When the U.S. Immigration Act of 1965 relaxed its quota system, thousands of nurses from the Philippines were qualified to have immigrant visas and later citizenship.

Marilyn arrived in the US in 1980 through the petition of St. Mary Hospital in Hoboken, New Jersey.

“We had a ready accommodation. I shared a studio-type room in a three-story building owed by the hospital. The rent was cheap at the time $75.00, utilities included except telephone and bed,” Marilyn recalls.

Upon getting her temporary Social Security Number and passing the orientation process, Marilyn started as GN or graduate nurse.

The GN performed the duties and responsibilities of a registered nurse (RN) under the supervision of a Clinical Instructor. GNs were paid lower than RNs. If GNs did not pass the licensing exam they were categorized as Certified Nursing Attendants (CNA). A CNA can take and must pass another exam to become Licensed Vocational Nurse (LVN).

Challenges as a Filipino Nurse

“Although our medium of instruction is English and we speak it every day, I found it hard to understand the Americans because of their accent,” Marilyn admits.

To better practice the listening ability of the new GNs, the nursing administrator provided the group with a TV set to watch shows during break time.

Technology in nursing schools in the Philippines at the time was not as sophisticated. Marilyn recalls that they had to undergo additional training in the use of the latest medical equipment.

Apart from homesickness, the winter season made her decide to move to California in 1981 where she met her future husband, Ronilo Telebrico. The couple has two daughters: Danielle Marie and Noelle Lyn. After the birth of Noelle, they permanently resided in Rowland Heights, California.

Ronilo was already a US citizen while Marilyn had working visa. Ronilo petitioned for her. Marilyn became an American citizen five years after.

“My husband and I were hands-on parents. He had to work in the morning and I had to work at night, so one of us would be with the kids when they were home,” shares Marilyn.

Marilyn only saw her daughters and husband during her days off. She would phone them to assure the girls that she cared for them even at work. Later, they were able to get help from a family friend, Nanay Choleng David, who stayed with the kids during the week. She also drove them round for their ballet and piano lessons and other extra-curricular activities, which neither Marilyn nor Ronilo could attend. 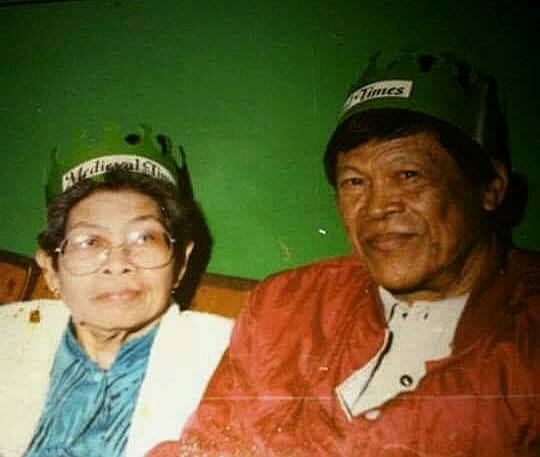 Rose and Tomas Golo, Marilyn’s parents during their stay in the US. CONTRIBUTED

After eight years, Marilyn went back to the Philippines to bring her parents, Rose and Tomas, to America to experience life on the “greener side” and to spend time with their granddaughters.

“Raising the two kids is no different back home. We made sure they respected the elders, did their chores, taught them the value of hard work and money and to know their manners. We guided and supported them as they served as altar servers in our Parish,” Marilyn says.

When her parents arrived, Marilyn says they became the “protectors.” The kids would hide in their Lola’s room when they did something undesirable.

“As kids we were spanked with a broom or pinched very hard. We could not do that to our children in the US,” Marilyn laughs.

After three years, her mother, Rose, succumbed to lymphoma and was buried in California. Tomas passed away in 2007.

Danielle Marie is a Certified Public Accountant and financial analyst and Noelle Lyn recently got an MS degree in nurse anesthesiology at Columbia University in New York City.

“My mother influenced them with her immense love for the family, love of God and her quiet presence,” Marilyn says.

“Raising daughters in America is a teamwork. They must always feel our presence. It takes positive attitude, respect, open communication/dialogue and love to make everything work,” Marilyn concludes.