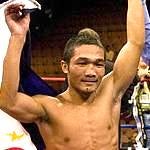 From the opening round Farenas was the aggressor, as he came forward landing his signature overhand left, which dropped Martinez midway through round one.

As the fight went on, Farenas continued to land his overhand left, wearing down Martinez.  In round three, Farenas landed a barrage of punches that send Martinez to the canvas for good. The knockout happened at the 2:04 mark of round three.

“I felt very good going into this fight and it showed in my performance,” said Michael Farenas.  “I felt I gave the fans the fans a great show.  My goal now is to get back into world title contention in the lightweight division.  I feel much stronger at this weight.  I’m hoping to get back in the ring by the end of the summer.”