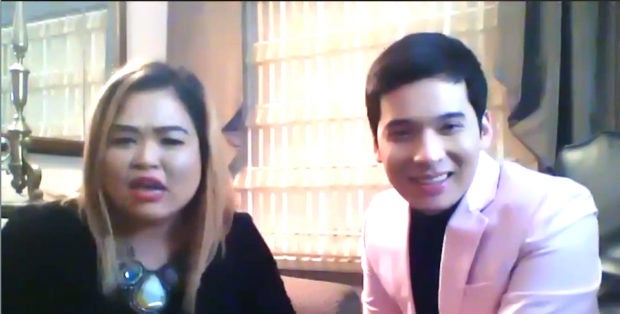 Bables plays lead character Intoy, in the town of Biri, Samar, who only receives cell phone reception when he visits a rock formation. From there he calls his overseas worker sister (played by Judy Santos) who remits money home to the family.

The independent drama film, directed by Chito Rono, is part of the Season Nine film series by the Asian Pop Up Cinema Film Festival to present Asian cinema to the Chicago community. These films represent authentic voices of Asia in artful narrations by filmmakers. The series started Sept. 10 and ends on Oct. 10.

On Oct. 1 Bables participated in a livestream interview with Filipino media panelists to discuss national events to celebrate Fil-Am History Month. It was hosted by Louella Cabalona.

“The film reflects this issue in the Philippines where loved ones who are left behind by overseas workers are impacted,” added Cabalona.

“Signal Rock” is based on a true story. “It’s a story that was written by a guy who could not write his own story,” explained Rody Vera, the film’s writer and producer.

“This whole immigration phenomenon has been happening in the Philippines for 20 years now. It has an effect on the relationships of people. People who are left behind have to deal with poverty and the distance within the relationship. I think that’s what we [Signal Rock] really wanted to say,” Vera added. Bables also shared his thoughts on the migrant issue:  “It is hard for them [relatives left behind] to be far away from someone they love. Sometimes, it’s not just about the money or material things that they receive. It’s about the love, presence and companionship that is not there for them anymore.”

Christine Liwag Dixon of The Philippine Star noted, “The hardest thing is being separated from family. Those of us who are established in the U.S., feel like there’s always that part of us that’s missing. Even when wer’e here, we still feel that longing, that disconnectedness.”

There is a parallel to Intoy the character and Christian Bables in his real life.  Intoy’s family struggles to make a living. In the actor’s personal life, he has also had to struggle to become an actor.

“My mom wasn’t there to support me as an actor. I lived by myself and got an education in acting without my family’s support morally or financially,” he explained.

The film got a positive review from hollywoodreporter.com. Reviewer Elizabeth Kerr wrote, “Signal Rock’s greatest strength, aside from Neil Daza’s crisp cinematography and a naturalistic, connective central performance by Bables, is its unapologetic emotion.”

Bables is an award-winning actor who is gaining international attention. He won the Best Actor Award from the 5th Hanoi International Film Festival for “Signal Rock.” He has won Best Supporting Actor Award at many film festivals, which included “Die Beautiful” in which he plays a transgender woman. Bables just wrapped up filming “The Panti Sisters.”

The other award-winning film that the Asian Pop Up cinema will show in celebration of Fil-Am History Month is “Miss Granny.”