‘Noli Me Tangere’ opera to be staged in Boston 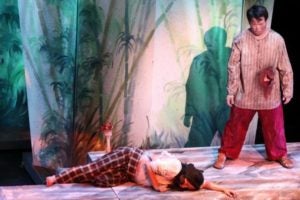 BOSTON — The opera version of “Noli Me Tangere” will be shown here via a staging by Opera Brittenica in June, to be sung in Tagalog with English supertitles.

The opera has music by Felipe de Leon and libretto by Guillermo Tolentino. Its title is Latin for “touch me not” and its plot is based on the novel by Jose Rizal of the same title.

The story involves Crisostomo Ibarra’s return to the Philippines after years of studying abroad and his encounters with love, corruption and attempts at his life.

Filipino Americans in the cast include baritone Peter Rolfe Dauz as Elias and tenor Joachim Luis as Don Filipo and Manlilibing.

KGB Productions chair Karrel Bernardo and executive producer Gerardo Gaddi intend to shepherd this opera across the US.

Bass-baritone Bernardo began his singing career in the Philippines and studied under Antonio Hila. Since moving to Chicago, he has been a featured soloist in various church choirs and sung with groups like Filipino folk fusion band Sama Sama Project.

“It began in the fall of 2012. It was the year of the 100th birth anniversary of Felipe de Leon,” says Gaddi of their involvement with the opera.

“His son Felipe de Leon Jr. was the chair of the Philippine’s National Commission for Culture and the Arts and was seeking ways to commemorate his father’s legacy on the international stage.”

“Karrel took on the challenge and brought me along to map out a strategy to commemorate De Leon’s legacy.”

With stagings in Chicago and Richmond, Virginia under their belts, there are plans to produce shows in Maryland and Texas after this Boston production.

KGB productions spearheaded a staging in Chicago in 2012 by Da Corneto Opera Company, where Bernardo sang the role of Elias.

It had a cast of 60, six of which were Filipinos, with music direction and stage direction by Lucia Matos, who also conducted the orchestra.

That seminal production inspired philanthropist Loida Lewis-Nicolas to organize a 2013 staging in New York (music direction by Michael Dadap, direction by May Pamana).

Lorna Imperial-Seidel, the foundation’s co-executive director, then teamed up with KGB Productions to push for more stagings.

Their collaboration brought the opera to Richmond, Virginia last year, where Bernardo sang the Elias and Alferes roles. It was staged by Capitol Opera Richmond with music direction by Anthony Smith, direction by P.J. Freebourn.

Smith and Freebourn will handle the same responsibilities in the Boston production. Opera Brittenica founder Joshua Collins will sing the Crisostomo Ibarra role.

Smith will also conduct 18 orchestra musicians who are affiliated with other Boston groups such as the Boston Philharmonic, Boston Symphony Orchestra, and Juventas New Music, among others.

READ about a staging of a musical version of “Noli Me Tangere” in LA here.