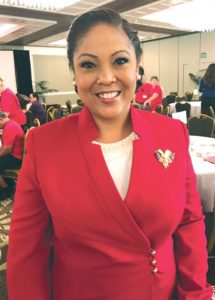 KAUAI, Hawaii — Filipino American Shirlene De La Cruz Ostrov, who recently retired as a colonel in the U.S. Air Force, was elected chairwoman of the Hawaii Republican Party (GOP) at a convention on the island of Kauai on May 13.

Ostrov’s election is significant in a number of ways. She is the first Filipino to lead a state organization of one of the major political parties in America.

She was fighting the entrenched establishment of the Republican Party in Hawaii who had put up an incumbent state legislator, Andria Tupola, as their candidate. As Ostrov was told, “If this were a beauty contest, you would win hands down.”

She won 265 to 111 because of good strategists, like Miriam Hellreich, Republican National Committeewoman for Hawaii.  They conducted a grassroots operation among the delegates. The majority of the GOP in Hawaii also wanted a person with proven leadership qualities and a vision for the party.

More significantly, the GOP sought a leader who could attract non-Caucasians to join, especially Filipinos who are the biggest non-white voting bloc in Hawaii.

Ostrov’s only political experience was being a U.S. congressional candidate for the first district of Hawaii. She said that she ran against overwhelming odds because she did not want the election to be uncontested. As it turned out, she could not prevail against a well-known, well-funded and union- backed Democrat who had previously served in the House of Representatives – Colleen Hanabusa.

Ostrov’s goal for the GOP

The Hawaii Republican Party is the minority party in Hawaii. Ostrov said that she sought the chairmanship because she wants to help build the GOP to become the true opposition party in the state.

It is a steep hill to climb, with only five Republicans in the State House of Representatives and none in the Senate, the party struggles to get their voices heard.  The GOP in Hawaii is not represented in the U.S. House or Senate.

In an op-ed in the Honolulu Star Advertiser on May 4, Ostrov was quoted as saying, “The Hawaii Republican Party is not just the party of no, nor are we simply the party of tax cuts. I believe we’re the party of aloha and ohana.  We are the party that wants to see every resident thrive so they can build their business, family and community without excessive government interference. That’s the future we see for Hawaii.”

Ostrov who, since her retirement, has become a business executive, and a co-founder of a non-profit Hawaiian Cultural School in the National Capitol Region said, “I think Hawaii’s Republicans have an excellent opportunity to rebuild and offer voters a real choice.  My intent is pure and simple.  I don’t have a private agenda. I am not seeking fame or fortune, I am not pursuing other positions at this time.  I simply want to serve the party in a full-time manner to help the Republicans take their rightful place in Hawaii.”

She also pointed out that the most critical aspect of building a solid foundation is to get the party on a firm financial footing.

“We are supposed to be a sharp contrast to the Democrats, offering viable, workable alternatives that energize the state’s residents to want our solutions and not continue with what we already know doesn’t work.  Our financial underpinning helps us speak our message broadly, and I know we are at a critical financial crossroads today.  In fact, I believe that this is one of the main reasons why the Hawaii Republican Party has been in decline for the last few years and it will be a primary area of focus for me as chairman.”

Immediately after her election as chairwoman, Ostrov went to Washington, D.C. to meet with GOP leaders and communicated with them her plans for the party in Hawaii. She said that they expressed their optimism and committed to providing support and resources to rebuild the local party.

Attracting Filipinos to the GOP

Ostrov stressed that, “Education and outreach in the community is key to our success as a party.  Not only will we increase transparency and accountability within party leadership, but sharing our points of view will attract more members from the growing ranks of disillusioned or disengaged Independents and Democrats looking for a conservative home.  We need those numbers in our party and their votes in the next election, votes that will come from the conservative cultures and people the Democrats have taken for granted.

“Two districts out of 51 are Districts 28 and 29, the Kalihi and Palama areas. Those areas are 78 percent Filipino, and not only are they the largest voting bloc in Hawaii, they are also very, very conservative.  They are Democrats now, but they are starting to understand that their voting habits are clashing with their conservative culture.  Education in the community will attract people whose family values and cultural background align more naturally with the Republican Party, if they hear us talk with them regularly as we share our message.  With a diverse staff that starts with a broad range of ideas, we will articulate a message that covers the values and issues most people in our state care about and that the opposition isn’t even paying attention to.”

Ostrov’s father is from Batangas and her mother is from Bulacan. Her father joined the U.S. Navy in the Philippines, became a U.S. citizen in 1962 and settled in Hawaii. She was the fifth of eight children (6 girls and 2 boys), and was born and raised in Mililani, among the pineapple fields of Central Oahu, Hawaii.

She said that her parents raised a “very tight-knit Catholic, conservative and patriotic family” who taught their children “to defend the institutions and the virtues of character that make the pursuit of happiness possible.”

She served for 23 years and retired as a colonel.  As a seasoned Logistics Readiness Officer, she held command and staff positions at the U.S. Air Force and Department of Defense.  She served as the commander of an Aircraft Maintenance Squadron, and as the Commander of an Air Mobility Squadron unit in the Pacific.  She commanded the 376th Expeditionary Mission Support Group, providing air combat power projection throughout the CENTCOM Area of Responsibility, and also served as a hub for strategic airlift operations and as an intermediate staging base for transiting personnel and equipment in support of operations in Afghanistan.

Ostrov served the U.S. State Department in support of the U.S. Special Envoy to Sudan and also served as the Legislative and Interagency Liaison for USTRANSCOM in Washington DC.  She likewise served as the Chief of the Global Combat Support Division at Headquarters, Pacific Air Forces.

She married her husband Mark Jacob Ostrov in 1990 and they have twin daughters, Jessica and Julia who are 16 years old.