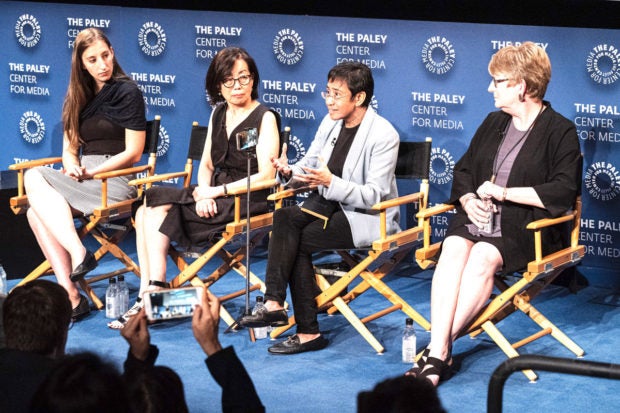 BEVERLY HILLS – Global and US-based media groups joined forces to turn the spotlight on the threats to a free press worldwide including in the Philippines, which has become one of the most dangerous countries for journalists.

Speakers at the opening of Los Angeles Press Freedom Week on Sept. 16 explained the challenges faced by journalists, especially during elections, including death threats, harassment and the use of social media to spread misinformation.

Filipino journalist Maria Ressa, TIME magazine’s 2018 Person of the Year, said social media platforms, such as Facebook and Twitter, have become the largest distributors of news globally “but they left behind the gatekeeping powers of news organizations.”

“Lies laced with anger and hate spread faster and further than those boring facts,” Ressa told the audience at the Paley Center for Media in Beverly Hills, California. Ressa, CEO and Executive Editor of Rappler, a Philippine news site critical of President Rodrigo Duterte’s administration, has faced down misinformation, death threats and continuing harassment. She has been arrested twice earlier this year and has had to post bail eight times within three months.

“The government has essentially filed one case a month against me and Rappler since last year,” she said.

The cases filed against Ressa are widely seen as an attempt by the government to intimidate journalists and suppress press freedom. The National Union of Journalists of the Philippines described the arrest of Ressa as a “shameless act of persecution by a bully government.”

In its recently released Southeast Asia Media Report, the International Federation of Journalists has dubbed the Philippines as the deadliest peacetime country for journalists in Southeast Asia.

The Philippines also ranked 134th out of 180 countries in the 2019 World Press Freedom Index maintained by Reporters Without Borders.

‘We have to push back’ The inaugural Press Freedom Week was launched by the Hollywood Foreign Press Association (HFPA), in partnership with the Los Angeles Times, Committee to Protect Journalists (CPJ), International Consortium of Investigative Journalists and the Reporters Committee for Freedom of the Press.

In her opening remarks, HFPA Board Chair Meher Tatna cited numerous cases of harassment and violence faced by journalists worldwide.

“As journalists, the ideal of a free press is something we don’t take for granted, and when depredations are made on the First Amendment, we feel it incumbent on us to step up,” Tatna said.

HFPA Treasurer Janet Nepales recalled her experiences as a reporter in the Philippines during the Marcos dictatorship. “Early on as a reporter, I learned the value of not being afraid to stand for what is right, to speak your mind and do what you think is right even if it means losing a lot,” Nepales said in her closing remarks.

“Because what matters in the end is that you know deep in your heart, you did what you were supposed to do, to write the truth, to speak the truth, and to do what a true journalist is supposed to do. Because without truth, what are you a journalist for?”