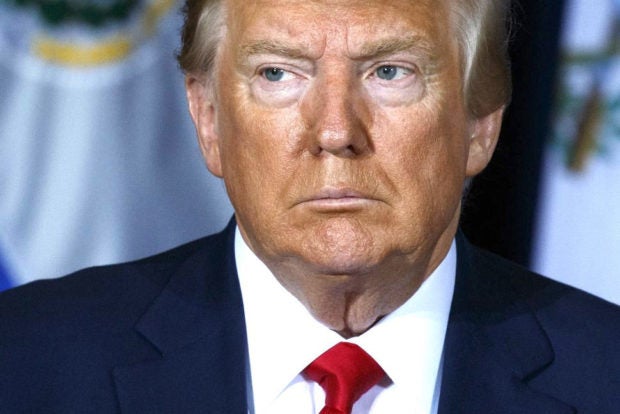 American Filipinos who have supported Trump are going to be challenged. Has the Trump presidency become the GOP’s Titanic?

You just have to read the transcript of the call between the Trump and Ukraine President Volodymyr Zelensky.

After Zelensky says, “We are ready to buy more Javelins from the United States for defense purposes.”

And Trump responds: “I would like you to do us a favor though because our country has been through a lot and Ukraine knows a lot about it.”

Concentrate on the word “favor” and it only augments the claim that the president has crossed the line.

The favor was for Ukraine to speak to Trump’s personal lawyer, Rudy Giuliani, and the Attorney General William Barr. Not just to talk Ukrainian politics about a prosecutor there, but to discuss a matter about “Biden’s son.”

Said Trump: (Vice President) Biden went around bragging that he stopped the prosecution so if you can look into it…it sounds horrible to me.”

There’s no evidence that Biden did anything wrong. But there’s plenty wrong with how Trump approached a foreign leader.  Trump seems willing to trade military aid (U.S. tax dollars) – he suspended aid to Ukraine shortly before the phone conversation — for political dirt on Joe Biden, his main political rival.

And this is the document released by the White House itself, as if they don’t understand what an impeachable offense is.

Most Democrats didn’t either until this week.  But that changed with all the reporting on that call to Ukraine.

Reacting to reports about the phone call on Tuesday, Rep. John Lewis of Georgia, the civil rights icon, was on the floor of the House, calling for the impeachment of Donald Trump.

It was the signal to all people of color. You awake? The time has come.

But if Trump is to be impeached, Asian Americans, as well as the rest of the country, need to understand the cherry on top of the impeachment sundae of the Trump administration.

And it’s in the memo Trump released as his defense.

Trump has already publicly admitted he asked the president of Ukraine to investigate political rival Joe Biden, and used your taxpayer dollars as leverage. Big deal?

That’s outright, in-your-face corruption, admitted by the president and his fixer, Rudy Giuliani, over the last week.

You needn’t go to a specific criminal statute. Just go straight to the Constitution and ask yourself if this is the conduct you’d expect from your commander-in-chief, the president of the United States. Does it rise to that abuse of power, “high crimes and misdemeanors?”

If it does, then there’s no question. This ain’t no witchhunt. And it’s not about litigating the 2016 election.

Let it sink in: Trump, on his own, while acting as the leader of our nation, asked Ukrainian President Volodymyr Zelensky, a foreign leader, for a personal, self-serving favor—essentially, tampering in the next U.S. election—in exchange for releasing military aid to Ukraine.

Trump admits that the call and the “ask” took place, which sounds like a “quid pro quo” to me. Or as Trump may prefer, tit for tat. A trade. An exchange.

But it’s more than enough to spur House Speaker Nancy Pelosi to call for an inquiry—finally.

The master vote calculator, Pelosi is all about “no congressional act before its time.” And if you don’t have the votes, it’s not time.

But when seven moderates from swing districts who flipped the house last midterm came out with an op-ed in the Washington Post outraged by the Ukraine situation, Pelosi couldn’t not act.

“The president must be held accountable,” Pelosi said in her public statement calling for the formal impeachment inquiry. “No one is above the law.”

The investigation now begins as the president releases the transcript of the Ukraine conversation. He acts as if there’s nothing there.  It is not an innocent call.

And if it is, then why not allow the acting national security chief to release details of the anonymous whistleblower who leaked the information about Ukraine in the first place?

Reportedly, the whistleblower has more than just Ukraine to reveal. That could be good.

But Ukraine may be all that’s necessary to convince the American people that Trump is unfit to be president.

The president went to a foreign leader and asked him a favor—to investigate his main political opponent Joe Biden to benefit Trump’s re-election.

This should be a crime that enrages all Americans. Of any political stripe. If you love democracy, if you are a true patriot, the thought of the president doing this — and using taxpayer dollars to close the deal– is something that should unite every red-blooded American in this country.

Asian America’s leading light in Congress, Senator Mazie Hirono, applauded Pelosi’s action. The Senate may not have the votes for removal. But that shouldn’t stop the House from a thorough inquiry.

But Hirono laid out in her statement a litany of things that may be the reason Trump thinks he can outlast what he insists is a trifle in Ukraine.

Hirono acknowledged Ukraine, but listed how Trump has:

“From Day 1 of his presidency, Donald Trump has been motivated by two things,” Hirono said. “Protecting himself and making money. Speaker Pelosi is right to hold this dangerous chief executive accountable.”

Trump has survived every outrage to date. But the Ukraine issue is different. Will a gas-lighted America continue to shrug and allow Trump to debase the presidency?

The impeachment move is about saving the Constitution, and allowing the Congress to play its role as a check to a reckless president who always puts love of Donald first.

Time for everyone to start paying attention now. The impeachment narrative is clear.

The president went to a foreign leader and asked him a favor—to investigate his main political opponent Joe Biden to benefit Trump’s re-election.

It’s clearly an act of corruption, an abuse of power. Trump may claim he’s the victim, that he’s the abused, not the abuser. Don’t be fooled by cries of “presidential harassment.”

Ukraine was enough to get Pelosi officially to put it on the record. The breaking of presidential norms is not normal. The alarm has sensed the presence of high crimes.

The ongoing threat of to our democracy is the presidency of Donald J. Trump.

Emil Guillermo is a journalist and commentator. He writes a column for the Inquirer’s North American Bureau. Twitter @emilamok;  find him on Apple Podcasts.

LATEST
Zubiri urges gov’t to immediately inoculate economic frontliners vs COVID-19
Dave Bautista on his Filipino grandfather, living with regret and being around superheroes and zombies
Snooty person behind lovely star’s ‘perfect’ persona
New COVID variants detected among returning OFWs
PH gets AVC go-signal to host Asian Senior Women’s Championship
MOST READ
usa Canada halts Filipino front-line worker’s deportation after public outcry
usa Common problems in applying for U.S. citizenship
usa Best Prime movies on Amazon
usa What are Polkadot coins? Should it have a spot in your portfolio?
usa ‘Friends’ reunion to air May 27 and with slew of celebrity guests