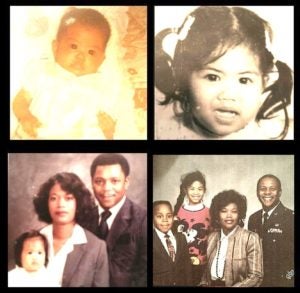 Alexis Brown-Windsor as a baby; with her adoptive parents and adoptive brother. CONTRIBUTEDA week after Mother’s Day on May 22, 2017, Alexis Danielle Brown Windsor, 35, of Clinton, Maryland, told her adoptive mother and father that she finally found her biological parents.

On August 9, 1982, Ofelia Belmonte was born to Josefina Belmonte, a household helper and native of Pampanga, and Diosdado Belmonte of Bicol, a wood carver. Ofelia was the seventh child of the couple. Josefina became sick after giving birth to Ofelia. She sent the siblings, including the newborn, to an orphanage in Angeles City with the hope of getting them back after she got better.

But when Ofelia was about eight weeks old, “Mr. and Mrs. Brown,” an African American couple working at Clark decided to adopt her. A certain Marta Torres told the couple that the baby was abandoned and never given a name. Mr. Brown was a navigator for C-130 planes at Clark Airfield while his wife was a secretary.

Before Ofelia turned two, US Immigration approved her adoption. Her passport was shown as Alexis Danielle Brown, born on September 9, 1982.

The Belmonte couple knew who adopted their daughter but had no means to claim her back.

‘We have the same nose’

Alexis knew that she was different but embraced being an adopted. “My mom says we looked alike, because we have the same nose,” Alexis laughs. 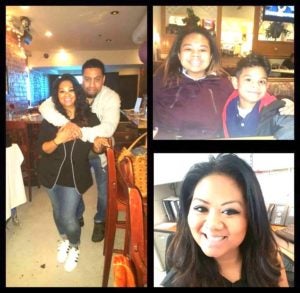 As a child, Alexis grew up where her parents were stationed. When Alexis was three, the Browns adopted another baby boy. Later, they moved to Maryland where the elder Brown retired. Since then, the family has stayed there.

“My parents brought me up with a lot of discipline and a good work ethic. There had to be a rhyme and reason to everything. I was raised to have a military mentality,” Alexis says.

As a teen, Alexis was teased and bullied for being Asian. “In my teenage years I was a rebel. I didn’t have a father/daughter relationship. As a teenager and young adult we hardly got along,” Alexis says.

“Once my teenage years were over, I grew up and stopped all that foolishness and tried to build a decent relationship with them,” Alexis explains.

Alexis pursued a graphic design degree at the University of Maryland but had to stop when her son was born. She now works as an executive assistant with the federal government.

Despite having a fulfilling job and raising her own family, Alexis never felt “real” because she knew that she had a family waiting for her to find them.

“I wanted to learn so much about my heritage, who my people were and everything that I started trying to research my family when it was just dial-up internet. There were more than a dozen times when I would keep looking and searching and just come to a dead end,” Alexis laments.

On May 14, Mother’s Day, Alexis’ husband purchased her a DNA kit from www.myheritage.com in the hope of finding her family.

“A friend put me in connection with a few Facebook groups. I posted my stories on their pages in hopes of connecting with someone in my family or who knew my family,” Alexis relates.

Alexis was introduced to John Guerrera, a Fil-Am administrator of Amerasian Children Looking for Their American GI Fathers, a Facebook page that reconnects Amerasians born to American servicemen and later to American tourists. Less than 24 hours after posting her story, strangers were sending her messages. 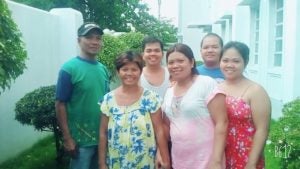 Guerrera was also able to track the Belmonte family in Pampanga and connected them to Alexis. Alexis verified that the couple she was meeting on Facetime were indeed her biological family.

“There were stories that I was told by my adoptive parents that matched with what my biological parents were saying without them knowing what I already knew,” Alexis says.

Alexis met her mother and father as well as six brothers and four sisters for the first time. Her father, a truck driver in Manila, is only home during weekends, but he rushed home on Friday when he heard the news that Ofelia had been found.

“I am now a tita to 35 nieces and nephews! My life feels complete and I couldn’t be happier. It almost feels surreal. I have to visit the Philippines,” Alexis beams.

“My 13-year-old daughter is excited but is shy so she doesn’t show it as much as my six-year-old son. He loves talking to his cousins, aunt, uncles and Lola and Lolo. I just learned what those meant,” Alexis says.

Alexis is forever grateful to her adoptive parents, but reconnecting with her biological family is important to make her feel complete.

To be able to visit her family in Pampanga, Alexis set up a gofundme account https://www.gofundme.com/to-angeles-city-philippines.