Why SF community turned out for fashion show-auction

Why SF community turned out for fashion show-auction 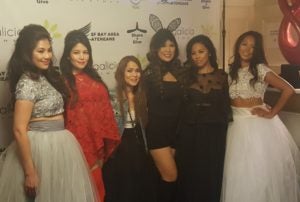 Share and Give founder fashion designer Gia Galicia (third from left), who is featured with her models, had her wish to help orphaned children in Antipolo Rizal and breast cancer survivors come true with the fashion show fundraising event. INQUIRER/Jun Nucum

SAN FRANCISCO — Filipino community groups raised funds for Filipino seniors, Filipinas with breast cancer and orphaned Filipino children by holding a fashion show and auction of items of the dresses worn in the show and precious items from private collections.

Dubbed Catwalk for Cause, the fundraising event was held recently at the Fort McKinley restaurant in South San Francisco for the Pilipino Senior Resource Center (PSRC), a nonprofit organization that serves Filipino seniors, their families and Filipina breast cancer clients and survivors residing in the South of Market District and other areas in San Francisco.

Part of the proceeds will also be given to the Precious Heritage Orphanage and street children in the Philippines through the Share and Give organization. PSRC executive director Cecile Ascalon is overwhelmed on by the turnout of guests that included the first lady of the City of San Francisco, Anita Lee, wife of Mayor Edwin Lee. INQUIRER/Jun Nucum

PSRC Executive Director Cecile Ascalon was at a loss for words after the event, admitting that she did not expect the large turnout of guests that included the first lady of the City of San Francisco, Anita Lee, wife of Mayor Edwin Lee.

“As early as last week we had to look for ways for people to buy tickets until the last days before the event proper,” Ascalon reported. “And around 200 people came. I was really surprised to see many people coming here to support this event.”

Among the more popular Items for auction included the dresses donated by the fashion designer Gia Galicia and worn by models in the fashion show, a jersey from the Golden State Warriors swingman power forward Andre Iguodala, items from Consul-General Henry Bensurto Jr., the Bay Area Ateneans and the PSRC, among others. A four-year-old girl does her part in helping less-fortunate orphaned children as young as her by modeling a dress for auction in the fundraising event. INQUIRER/Jun Nucum

Ascalon also attributed the success to the much-needed help extended by different Filipino groups in San Francisco including the Philippine Consulate, San Francisco State University and other groups that volunteered their services.

“My youngest sister died of breast cancer six years ago when she was just 34 years old. When the board of the PSRC invited me to be their executive director, I couldn’t say no because I felt that this something very close to my heart,” Ascalon disclosed.

Galicia, the founder of Share and Give, also had her own personal reasons in requesting the Bay Area Ateneans and the PSRC to help her organize the fashion show as a fundraiser. Steve Leonardo of SF Bay Ateneans said that his group is guided by their alma mater’s goal of being “men for others.” INQUIRER/Jun Nucum

“My husband’s mother passed away because of breast cancer and a sister-in-law was also a victim so this is also something personal for me,” Galicia confirmed.

Besides breast cancer victims, Galicia also had the orphaned children of Precious Heritage Children’s Home in Antipolo Rizal as her inspiration for the show. “Two years ago I was in the Philippines and I spent an afternoon with the orphaned children at the Precious Heritage Children’s Home in Antipolo that just melted my heart. I told myself I was going to do something for them and with this event my dream has come true,” Galicia recalled. “I was very fortunate that because of the Bay Area Ateneans, who were very vital in making this show a success. They gave me contacts to the models who were very willing to be a part of this very worthy cause.”

The show featured a combination of past and new collections of Galicia’s design dresses that were al auctioned with starting bid at 50 percent off the original price.

Also featured for auction were some dresses for the very young that were modeled by children who volunteered to join the catwalk.

Steve Leonardo of SF Bay Ateneans stated that their group was guided by their alma mater’s goal of being “men for others” in joining the event.

“The Catwalk for a Cause Fashion Show Auction Dinner is one of the activities we have as a group for the rest of the year. We happen to have met with people in the fashion industry so this year we thought of doing something related to having a fashion show that would at the same time benefit our Filipino seniors in the Bay Area as well as a group of orphans in the Philippines. This is the group’s way of giving back,” Leonardo stressed. A personally signed jersey from the Golden State Warriors swingman power forward Andre Iguodala complete with a certificate of authenticity and valued at $650 was among those auctioned with a $350 starting bid. INQUIRER/Jun Nucum

PSRC director Betty de Guzman, herself a breast cancer survivor for 17 years, was also overwhelmed with the success of the fundraising event.

“This is the first time for me to come to an event like this although I have been a part of the PSRC since 2010 and I never expected the fundraising event to turn out this way,” de Guzman said. “The best part of it is that this will help the many senior citizens that we serve.”

De Guzman added that the PSRC has about 50 active members who usually go to their meetings foremost for camaraderie, fellowship and company. The relationship and sharing among members are the most important things for them.