Martial law not needed, but who can stop Duterte’s destiny?

Martial law not needed, but who can stop Duterte’s destiny? 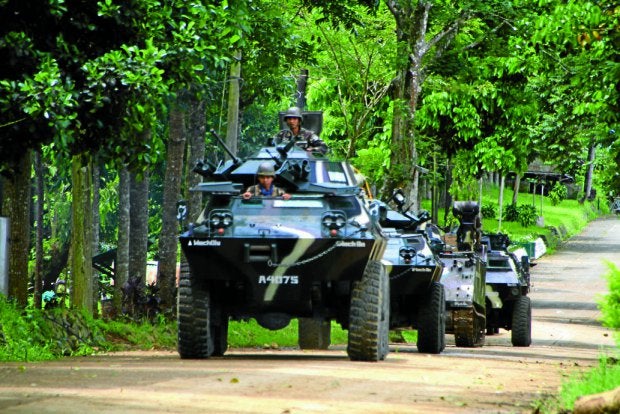 It’s disheartening to see the country of People Power to be once again under Martial Law. A “partial martial,” perhaps. But what can we expect from a Philippines led by a quick-triggered man out to fulfill his destiny as the second coming of Ferdinand Marcos.

And so we have the natural evolution of Rodrigo Duterte, as if he were just waiting for an opportunity like the one in Marawi.

One small part of Mindanao under siege, yet enough to declare martial law for the entire region for at least 60 days. It means the rights of not just the rebels but all private citizens are compromised.

If you thought the extrajudicial killings of more than 8,000 was bad, just wait till you see what the government can do when the focus goes beyond drugs and is based on international terror.

At his press conference, Duterte wasn’t even sure about how bad things were in Marawi.  But he used an example of a police chief who was decapitated to illustrate the violence that was spreading.

“These things government cannot allow,” Duterte said. “It is an open defiance and the violence and atrocities continue.”

Oh, wait a minute. The chief wasn’t decapitated after all.

The most grievous example Duterte used to justify his power grab was in error.  “Partial martial” for the entire region? Totally unnecessary. The army had yet to deploy what was needed to take on the rebels in that small town in the first place.

And nothing like this, not even a real beheading has forced this kind of reaction in the recent past.

World events have set up Duterte to maximize a move to approach his real desire and destiny—to be the new world autocrat of Asia.

Duterte is in Russia wearing a suit, being the international player, acting tough, and establishing the Trump-like bromance of the world’s tough guy, Putin.  I wonder if they talked about Trump? No doubt they did.

As  RodDee Dee (my  gangsta rap name for the pres) was there, the world is hit by another international terror strike in Manchester, England this time at a pop star Arianna Grande’s concert that claims young people’s lives and establishes a new wave of fear throughout the world.

With the Marawi incidents, Duterte is handed his spotlight moment on the world stage.

It’s the kind of leverage a small country like the Philippines needs to punch above its class.

What is the RP’s reaction to Islamic rebels in Marawi. As Duterte said, “Government must put an end to this. Government cannot gamble with ISIS because they are everywhere.”

ISIS as bogeyman always works whenever an autocrat wants power.

By cutting short his visit to Russia, he leaves Putin early for the only thing that could boost his image.

I can just hear RodDee saying, “Excuse me, I must crack down on my innocent countryman and impose my will. Give me a rain check on the borscht dinner, please.”

As for the U.S. side, we now we have classified documents leaked to the media. It’s a May 2nd memo from Marshall Alferez, acting assistant secretary of the Philippine Department of Foreign Affairs, issuing a transcript of phone call on April 29 between Trump and Duterte.

In the call, Trump praises Duterte: “I just wanted to congratulate you because I am hearing of the unbelievable job on the drug problem. Many countries have the problem, we have a problem, but what a great job you are doing and I just wanted to call you and tell you that.”

The president of the United States praising the human rights abuses that are extrajudicial killings? That’s a startling admission. Trump would like to shoot them all and ask questions later? That’s not particularly comforting to anyone concerned with human rights and justice.

Even more startling is Trump and Duterte’s exchange on North Korea’s Kim Jong Un. “He is not stable,” Duterte said. “He keeps on smiling when he explodes a rocket.”

Trump then reveals a big secret.

“We have a lot of firepower over there,” Trump said. “Two submarines —the best in the world—we have two nuclear submarines—not that we want to use them at all.”

Trump then asks Duterte to call China’s President Xi to help out on North Korea.

In the U.S., people are concerned that such loose lips by Trump has given away a strategic advantage. Trump has been on a tirade against leakers in the probe over his administration’s ties to Russia. But now Trump is the big leaker himself.

For Duterte, the transcript reveals he’s just happy to be in the loop between the most powerful men in the world leading China, Russia and the U.S.

So what does he do to solidify his sense of power and importance?

On Wednesday, he was trying it on for size for the first time.

“Martial law is martial law,” Duterte said. “My fellow countrymen, you’ve experienced martial law. It would not be different from what President Marcos did. I’ll be harsh.”

And who is speaking out?

Everyone seems to be back the action, because as Duterte said, it’s ISIS. The international bogeyman.

No one is questioning the slippery slope we’re on now. What’s next? Free speech? Social media? News black outs?

American Filipinos who left during the Marcos era know how it works: 60 days now; maybe 120?  Mindanao today, the entire country next?

You might call this period Duterte’s test drive to absolute power.

Voices worldwide need to speak out. But the voices that count the most are in theP hilippines. Duterte’s invocation of martial law was unnecessary. Time to speak out and let your voice be heard, while you still have one.

Emil Guillermo is an award-winning journalist and columnist for the Inquirer U.S. Bureau.