ISIS rears its ugly head in the islands

ISIS rears its ugly head in the islands NEW YORK—Now that the Syrian city of Raqqa, once the capital of the self-proclaimed caliphate of the extremist group ISIS (the Islamic State in Iraq and Syria), has been liberated, its most fanatical adherents have moved to other continents, other countries.

Peninsular Southeast Asia has emerged as one such location where this backward ideology of sectarian hatred and violent fanaticism, with only the most tenuous connection with Islam, has set down roots. In the southern part of the Philippines there is no doubt that ISIS has managed to secure a foothold.

This past January, the Cathedral of Our Lady of Mount Carmel in Jolo was rocked by two bombs, resulting in at least 20 deaths among the Catholic faithful who had come to attend Sunday Mass. The city of Jolo, capital of Jolo Island, has been the front and center of various Muslim insurgencies that have bedeviled Mindanao—and the country—since the 1970s, in attempts first, to secede from the republic, and, failing that, to gain autonomy, which it now has to a certain extent.

But that has not been enough for those who seek a caliphate ruled by a narrow, extreme vision of what they believe is the true Islam. The spread of this particularly violent and intolerant ideology to the Philippines can be traced to the 1990s, when Filipino jihadists returned from the U.S.-backed war against the Soviet occupation of Afghanistan. Returnees included those who had fallen under the sway of extremist madrassas that adhered to Saudi Arabia’s Wahabism. Consequently, local grievances became linked to this global call for jihad. Thus, Jemaah Islamiyah, affiliated with Al Qaeda, set up training camps in Mindanao’s jungles. The group claimed responsibility for the bombing of a Bali nightclub in 2002, killing more than 200 people.

The call to violent jihad has resonated with the Abu Sayyaf Gang (ASG), and it has pledged itself to ISIS. For the most part, until its proclaimed alliance with ISIS, the ASG was mostly a small criminal, kidnap-for-ransom gang with an Islamist veneer and given to beheadings. The island of Basilan, off the Mindanao province of Zamboanga, is its base. 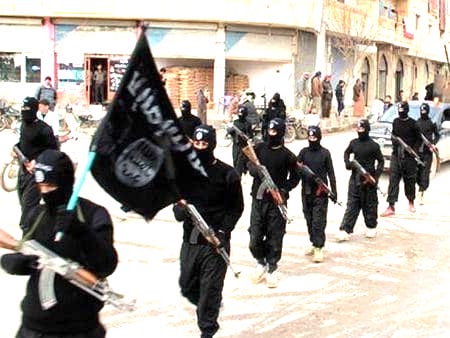 ISIS terrorists before they were drive out of Raqqa, Syria. AP PHOTO

Civil authorities on the island claim that the ASG is now down to 20 fighters and that the foreign jihadists are either dead or have left. That is almost certainly wishful thinking. A Colonel Besana of the AFP has estimated the overall number at approximately 200. The Armed Forces of the Philippines, due mostly to incompetence and corruption, despite regular triumphalist pronouncements, has been unable to defang the group.

In 2016, ISIS targeted Mindanao in its recruitment efforts, with online videos urging those who could not make their way to Iraq and Syria to travel instead to the southern Philippines. The result? According to intelligence officials, jihadists from Somalia, Yemen, and Chechnya responded.

In May of 2017, ISIS militants, headed by the local Maute clan, held Marawi City hostage. Marawi, built around Lake Lanao and the capital of Maguindanao Province, is the largest Muslim-majority city in the Philippines. By the time the army retook the city five months later, Marawi lay in ruins. Among those killed were Isnilon Hapilon, the militants’ head, and 900 insurgents, including foreign fighters from Malaysia, Indonesia, Saudi Arabia, Yemen, and Chechnya.

The desolation of Raqqa in Syria is a mirror image of the desolation of Marawi. The devastation in both reminds me of that adage, the operation was a success but the patient died.

Predictably, President Duterte has ordered the military to crush the militants. Certainly, tighter border patrols on the seas and policing on land will help but the real solution lies not in more firepower and militarization, certainly not in continuing martial law in Mindanao and possibly throughout the archipelago, but in allocating more economic resources to the development of the region. Duterte, as he likes to remind us, is after all from Mindanao.

Interestingly, the takeover of Marawi seemed to have been funded by drug trafficking, with the Maute clan suspected to be the main distributor of these drugs. And where do these drugs come from? Mostly from China. There are connections here that need to be fully understood if this crisis is to be dealt with effectively.

Instead of the constant drumbeats of a drug war—really a manufactured crisis that targets the marginalized and does nothing to stem the flow of drugs into the country—; instead of persecuting, imprisoning, and even allowing the killing of those who raise their voices against the daily, endemic injustices suffered by the masa; the Duterte administration needs to get real and come up with a strategy not just for the battlefield, but for the social and economic upliftment of the very people his administration has cruelly targeted.

But that might be expecting the crow to turn white.