President Donald Trump defended himself Friday against a whistleblower’s complaint including a reported private conversation he had with a foreign leader.

The complaint, which the administration has refused to let Congress see, is “serious” and “urgent,” the government’s intelligence watchdog said.

Some of the whistleblower’s allegations appear to center on Ukraine, according to The Washington Post and The New York Times.

The newspapers cited anonymous sources familiar with the matter.

The Associated Press has not confirmed the reports. 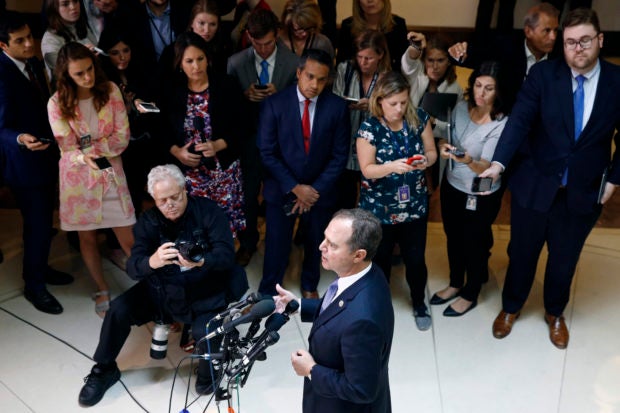 Rep. Adam Schiff, D-Calif., chairman of the House Intelligence Committee, speaks with reporters about a whistleblower complaint Thursday, Sept. 19, 2019, on Capitol Hill in Washington. Schiff says he cannot confirm a press report that said a whistleblower’s complaint concerned a promise President Donald Trump made on a phone call to a foreign leader. (AP Photo/Patrick Semansky)

In a tweet Friday, President Donald Trump did not reference Ukraine or any other country, but said: “there was nothing said wrong.”

He tweeted about “the perfectly fine and respectful conversation.”

The standoff raises fresh questions about the extent to which Trump’s allies are protecting the Republican president from oversight and, specifically, whether his new acting director of national intelligence, Joseph Maguire, is working with the Justice Department to shield the president from the reach of Congress.

It also plunged the Trump administration into an extraordinary showdown with Congress over access to the whistleblower’s complaint as lawmakers press their oversight of the executive branch.

The administration is keeping Congress from even learning what exactly the whistleblower is alleging, but the intelligence community’s inspector general said the matter involves the “most significant” responsibilities of intelligence leadership.

A lawmaker said the complaint was “based on a series of events.” 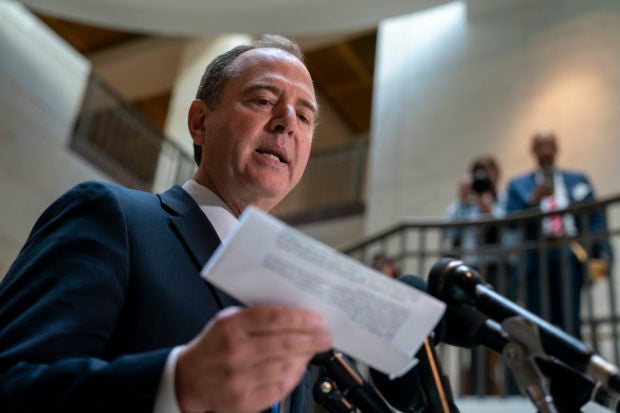 The inspector general appeared before the House intelligence committee behind closed doors Thursday but declined, under administration orders, to reveal to members the substance of the complaint.

Rep. Adam Schiff, D-Calif., the chairman of the House Intelligence Committee, said he was prepared to go to court to try to force the Trump administration to open up about the complaint.

“The inspector general has said this cannot wait,” said Schiff, describing the administration’s blockade as an unprecedented departure from the law.

“There’s an urgency here that I think the courts will recognize.”

Schiff said he, too, could not confirm whether newspaper reports were accurate because the administration was claiming executive privilege in withholding the complaint.

But letters from the inspector general to the committee released Thursday said it was an “urgent” matter of “serious or flagrant abuse” that must be shared with lawmakers. 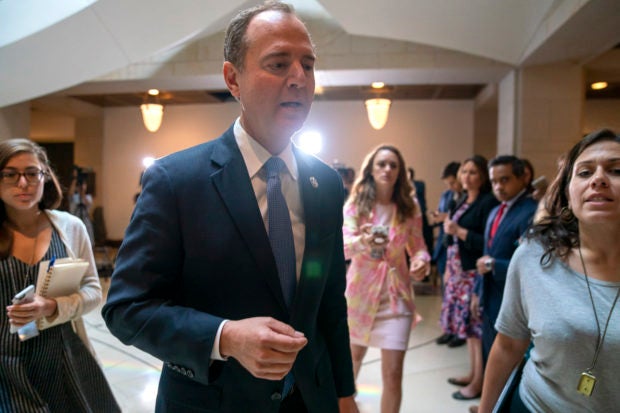 The letters also made it clear that Maguire consulted with the Justice Department in deciding not to transmit the complaint to Congress in a further departure from standard procedure.

Because the administration is claiming the information is privileged, Schiff said he believes the whistleblower’s complaint “likely involves the president or people around him.”

Trump on Thursday dismissed it all, noting that others would be aware of the call. 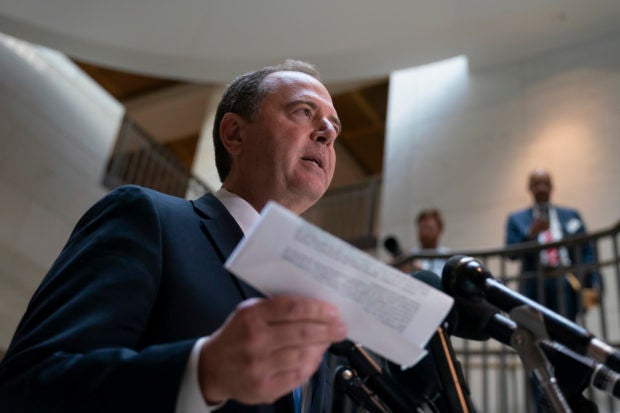 “Is anybody dumb enough to believe that I would say something inappropriate with a foreign leader while on such a potentially ‘heavily populated’ call.”

House Democrats are fighting the administration separately for access to witnesses and documents in impeachment probes.

Democrats are also looking into whether Trump lawyer Rudy Giuliani traveled to Ukraine to pressure the government to aid the president’s reelection effort by investigating the activities of potential rival Joe Biden’s son Hunter, who worked for a Ukrainian gas company.

During an interview Thursday on CNN, Giuliani was asked whether he had asked Ukraine to look into Biden. Giuliani initially said, “No, actually I didn’t,” but seconds later he said, “Of course I did.”

Giuliani told CNN that Donald Trump was unaware of his actions.

I told him about it afterward.

Later, Giuliani tweeted, “A President telling a Pres-elect of a well known corrupt country he better investigates corruption that affects the US is doing his job.” 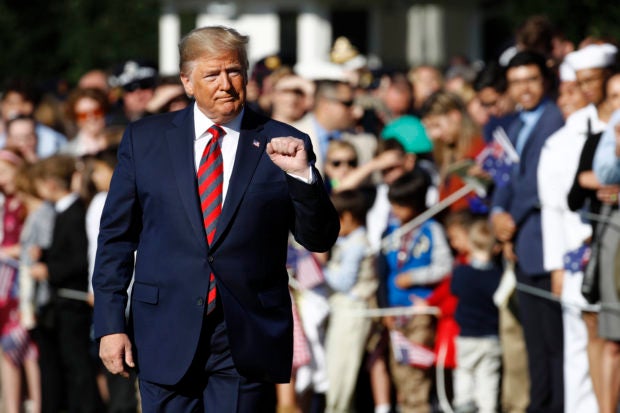 Among the materials, Democrats have sought is a transcript of a phone call Donald Trump had with Ukrainian President Volodymyr Zelenskiy on July 25.

This new situation, stemming from the whistleblower’s Aug. 12 complaint, has led to Democratic lawmakers’ public concern that government intelligence agencies and the recently named acting director might be under pressure to withhold information from Congress.

Trump named Maguire, a former Navy official, as acting intelligence director last month, after the departure of Director Dan Coats, a former Republican senator who often clashed with the president, and the retirement of Sue Gordon, a career professional in the No. 2 position.

Maguire has refused to discuss details of the whistleblower complaint, but he has been subpoenaed by the House panel and is expected to testify publicly next Thursday.

Maguire and the inspector general, Michael Atkinson, also are expected next week at the Senate intelligence committee.

Atkinson wrote in letters that Schiff released that he and Maguire had hit an “impasse” over the acting director’s decision not to share the complaint with Congress.

While Atkinson wrote that he believed Maguire’s position was in “good faith” it did not appear to be consistent with past practice.

Atkinson said he was told by the legal counsel for the intelligence director that the complaint did not actually meet the definition of “urgent concern.”

And he said the Justice Department said it did not fall under the director’s jurisdiction because it did not involve an intelligence professional.

Atkinson said he disagreed with that Justice Department view.

The complaint “not only falls under DNI’s jurisdiction,” Atkinson wrote, “but relates to one of the most significant and important of DNI’s responsibilities to the American people.”

The inspector general said he requested authorization to at the very least disclose the “general subject matter” to the committee but had not been allowed to do so.

He said the information was “being kept” from Congress.

These decisions, the inspector general said, are affecting the execution of his duties and responsibilities.