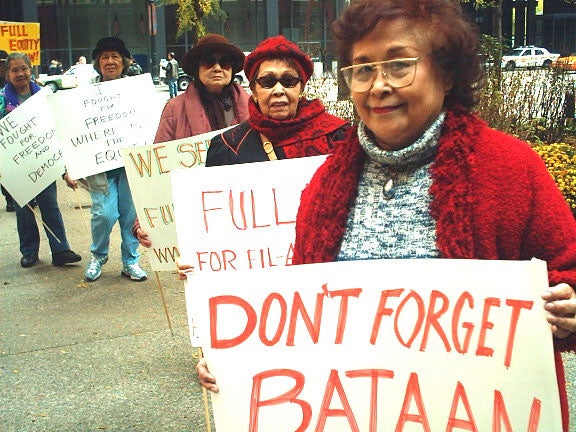 Remedios Cabagnot leading the rally of wives and widows of Filipino World War II veterans in front of the Federal Building in Chicago in 2001. CONTRIBUTED

CHICAGO – Even as Filipino Americans across the nation are looking forward to Filipino American History Month as a celebration of past events and achievements, Fil-Ams in Chicago have been making their own history.

Two inspiring struggles are worthy of research and study — the successful campaign for the Filipino Veterans (Filvets) Equity Compensation Act of 2009 and the Illinois Domestic Workers’ Bill of Rights Act.

Just like many struggles, organizing and mobilizing people in these efforts took many twists and turns, the unity of purpose and a clear strategy overcoming divided goals, disunited leadership, unclear messages, and uninformed constituencies.

In the case of the Filipino veterans’ struggle for full equity, the veterans drew on their own experience from the battlefield. They never got tired of fighting the enemies of justice. The gallantry, selfless service, and sacrifice they displayed during the war were carried into the arena of legislative and grassroots work.

Filvets and advocates worked hard in delivering their message to the halls of Congress, district congressional offices, communities, American Legions, student campus, churches. The message: rectify the Rescission Act of 1946 that denied rights and benefits promised to the veterans during the war. One glorious moment of this struggle in Chicago was when the wives and widows of Filvets held rallies in front of the Federal Building.

It is worth mentioning that in Chicago, many organizations and individuals grasped the local lobbying strategy, which stressed the importance of building broad-based support. The organizing led to a powerful grassroots lobbying group that helped the national movement get President Barack Obama’s signature.

Obama signed the Filipino Veterans Equity Compensation Act of 2009 into law on February 17, 2009, which compensated and recognized the Filvets for their brave contributions to the war. Even before being elected as 44th President of the United States, Obama as an Illinois U.S. Senator, had already supported the cause due to the steadfast lobbying work of the Chicago Filvets and the organizing work of concerned Filipino Americans.

Domestic workers had been excluded from the protection that labor laws provide. They had not been considered as “workers” under then-existing labor laws. Members of the Filipino American community Illinois joined the statewide campaign for domestic workers’ right to respect and dignity, painstakingly organizing Filipino and American domestic workers. 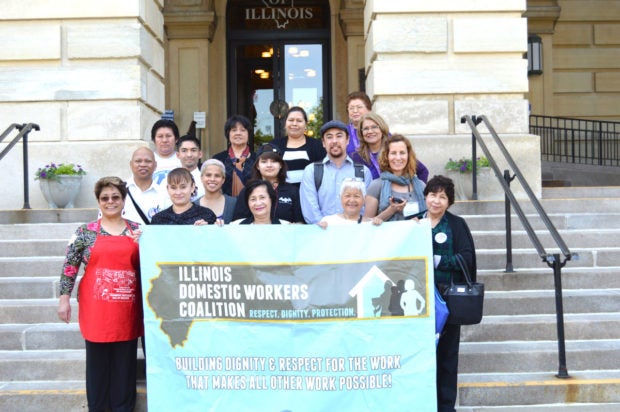 Finally, they successfully lobbied the Illinois General Assembly to pass the Illinois Domestic Workers’ Bill of Rights Act and compelled Illinois Governor Bruce Rauner to sign the act into law on August 21, 2016.

Domestic workers are now covered by Illinois’ Minimum Wage Law and the One Day Rest in Seven Act, which requires employees get at least 24 hours of rest in each calendar week and a meal period of 20 minutes for every 7.5-hour shift. They are also covered by the Illinois Human Rights Act, which protects against sexual harassment, and the Wages of Women and Minors Act, which prohibits employers from paying women and minors “an oppressive and unreasonable wage.”

Similar to the participants in the equity struggle of the Filipino veterans, those who got involved in the domestic workers’ struggle for respect and dignity are modern-day heroes. From the lens of the Filipino culture, bayani is someone who fights with his “bayan” or community, someone who is brave or valiant, who works toward a common task or cooperative endeavor, or bayanihan.