Officials in the Houston area were preparing high-water vehicles and staging rescue boats Tuesday as Tropical Storm Imelda moved in from the Gulf of Mexico, threatening to dump up to 18 inches of rain in parts of Southeast Texas and southwestern Louisiana over the next few days.

The storm, which formed Tuesday, made landfall near Freeport, Texas, with maximum sustained winds of 40 mph. 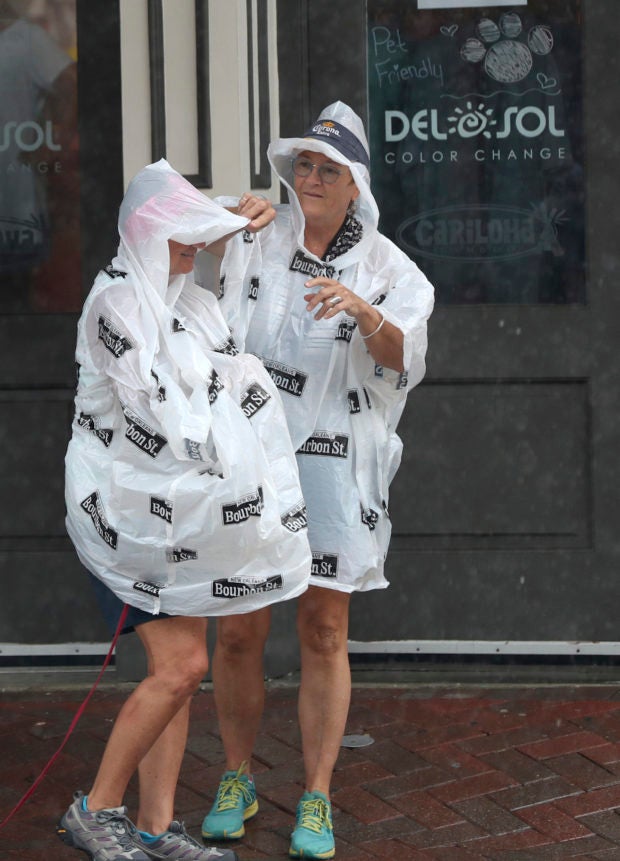 Linda Orndorff, right, adjusts the hood of Candy Lester’s rain poncho as they explore The Strand in Galveston, Texas on Tuesday, Sept. 17, 2019. The two, from Florida, were trying to make the best of the rainy weather. Heavy rain from Tropical Storm Imelda is expected to soak Galveston County and could cause flooding. (Jennifer Reynolds/The Galveston County Daily News via AP)

Jeff Lindner, a meteorologist, and director of flood operations for the Harris County Flood Control District in Houston said the main threat from Imelda remained the potential for heavy rainfall and flooding.

“We have a few things in our favor.

The ground is dry. It’s been dry for a while here as we’ve come through summer,” Lindner said. “The initial parts of this rainfall will go toward saturating the ground.”

Ken Graham, director of the National Hurricane Center, said the Houston area, along with parts of the upper Texas coast and East Texas, could get “significant rainfall” through Thursday as the storm moves north. Imelda’s rain bands were also stretching across into Louisiana. 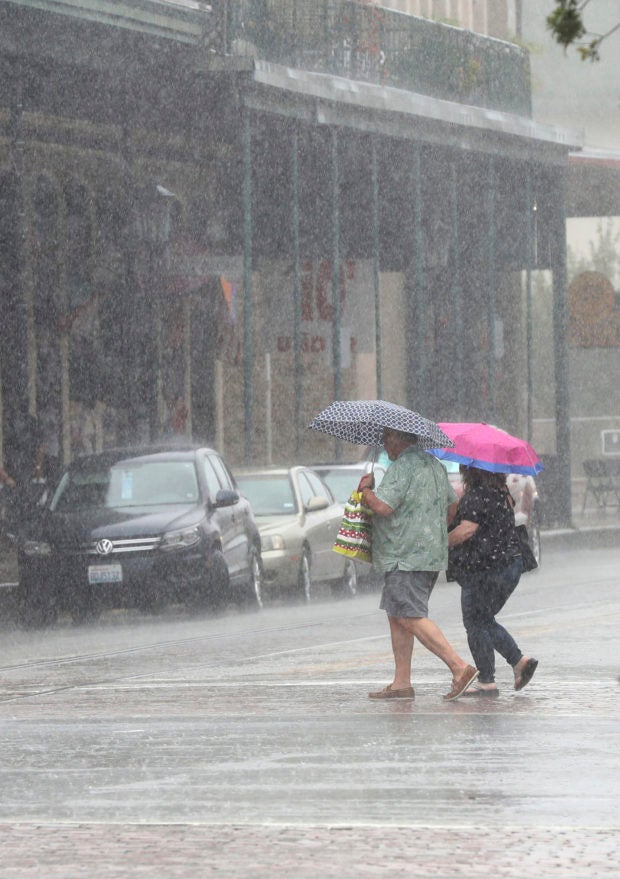 Imelda was the first named storm to impact the Houston area since Hurricane Harvey, according to the National Weather Service.

Harvey dumped nearly 50 inches (130 centimeters) of rain on parts of the flood-prone city on August 2017, flooding more than 150,000 homes in the Houston area and causing an estimated $125 billion in damage in Texas.

Lindner says while there is the potential for some isolated structure flooding in the Houston area, widespread house flooding from Imelda “doesn’t look likely at this point.”

But Lindner said that residents who live in flood-prone areas should still be mindful and take some extra precautions.

Some parts of Harris County and neighboring Galveston County had already received about 4 inches of rain through Tuesday afternoon.

The Galveston school district announced it was canceling classes on Wednesday.

In a tweet on Tuesday, Houston Mayor Sylvester Turner asked residents to be “alert and weather aware.”

The Texas Division of Emergency Management will be rostering four boat squads in coastal areas.

The Texas Parks and Wildlife Department will be moving boats to support the Beaumont area and adjacent regions.

Meanwhile Tuesday, the National Hurricane Center said Hurricane Humberto in the Atlantic Ocean is posing a stronger threat to Bermuda, though it was more than 500 miles away.