GM Strike Brings Factories and Warehouses to a Freeze

GM Strike Brings Factories and Warehouses to a Freeze: More than 49,000 members of the United Auto Workers went on strike Monday against General Motors, bringing more than 50 factories and parts warehouses to a standstill in the union’s first walkout against the No. 1 U.S. automaker in over a decade. 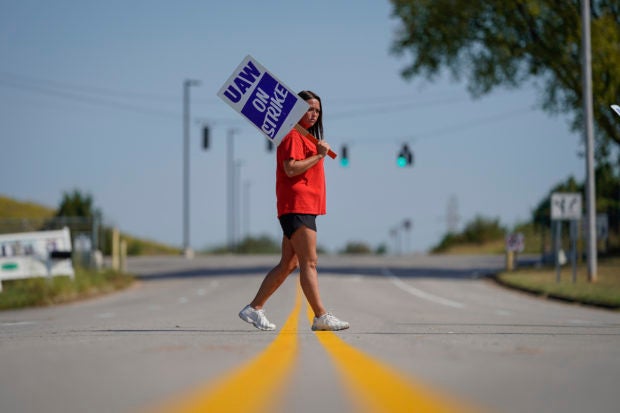 Workers left factories and formed picket lines shortly after midnight in the dispute over a new four-year contract. The union’s top negotiator said in a letter to the company that the strike could have been averted had the company made its latest offer sooner.

The letter dated Sunday suggests that the company and union are not as far apart as the rhetoric leading up to the strike had indicated.

Negotiations continued Monday in Detroit after breaking off during the weekend.

But union spokesman Brian Rothenberg said the two sides have come to terms on only 2% of the contract. “We’ve got 98% to go,” he said Monday.

Asked about the possibility of federal mediation, President Donald Trump, said it’s possible if the company and union want it. 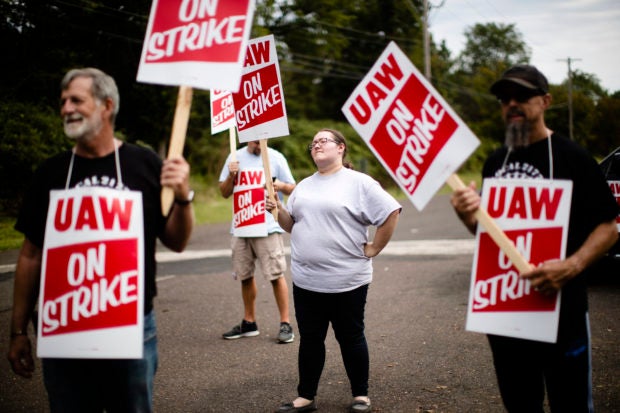 Kelly McKinnon and other workers and their supporters demonstrative outside a General Motors facility in Langhorne, Pa., Monday, Sept. 16, 2019. More than 49,000 members of the United Auto Workers walked off General Motors factory floors or set up picket lines early Monday as contract talks with the company deteriorated into a strike. (AP Photo/Matt Rourke)

“Hopefully they’ll be able to work out the GM strike quickly,” Trump said before leaving the White House for New Mexico. “Hopefully, they’re going to work it out quickly and solidly.”

Wall Street did not like seeing the union picketers. GM shares closed Monday down 4.2 percent to $37.21.

On the picket line Monday at GM’s transmission plant in Toledo, Ohio, workers who said they have been with the company for more than 30 years were concerned for younger colleagues who are making less money under GM’s two-tier wage scale and have fewer benefits.

Paul Kane, from South Lyon, Michigan, a 42-year GM employee, said much of what the union is fighting for will not affect him.

“It’s not right when you’re working next to someone, doing the same job and they’re making a lot more money,” he said. “They should be the making the same as me.

They’ve got families to support.” 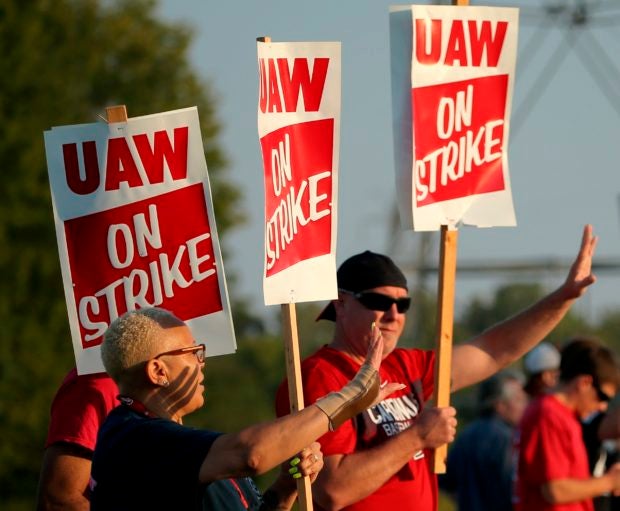 Kane said GM workers gave up pay raises and made other concessions to keep GM afloat during its 2009 trip through bankruptcy protection.

“Now it’s their turn to pay us back,” he said. “That was the promise they gave.”

UAW Vice President Terry Dittes told that the company’s latest offer to the GM Strike  might have made it possible to reach an agreement if it had come earlier.

“We are disappointed that the company waited until just two hours before the contract expired to make what we regard as its first serious offer,” Dittes wrote in the letter to Scott Sandefur, GM’s vice president of labor relations.

There are many important items left in the talks, including wage increases, pay for new hires, job security, profit sharing and treatment of temporary workers, Dittes wrote.

“We are willing to meet as frequently, and for as long as it takes, to reach an agreement that treats our members fairly,” the letter said.

GM issued a statement saying it wants to reach a deal that builds a strong future for workers and the business.

The offer we presented to the UAW prioritizes employees, communities and builds a stronger future for all. It includes improved wages and health care benefits, over $7B in U.S. investments and 5,400 jobs. Let's come together and secure our shared future: https://t.co/1QVtUokpis pic.twitter.com/Iss4S38Ozs

The automaker said Sunday that it offered pay raises and $7 billion worth of U.S. factory investments resulting in 5,400 new positions, a minority of which would be filled by existing employees.

GM would not give a precise number. The company also said it offered higher profit sharing, “nationally leading” health benefits and an $8,000 payment to each worker upon ratification.

Before the talks broke off, GM offered new products to replace work at two of four U.S. factories that it intends to close and end the GM Strike.

The company pledged to build a new all-electric pickup truck at a factory in Detroit, according to a person who spoke to The Associated Press on condition of anonymity.

The person was not authorized to disclose details of the negotiations.

The automaker also offered to open an electric vehicle battery plant in Lordstown, Ohio, where it has a huge factory that has already stopped making cars and will be closed. 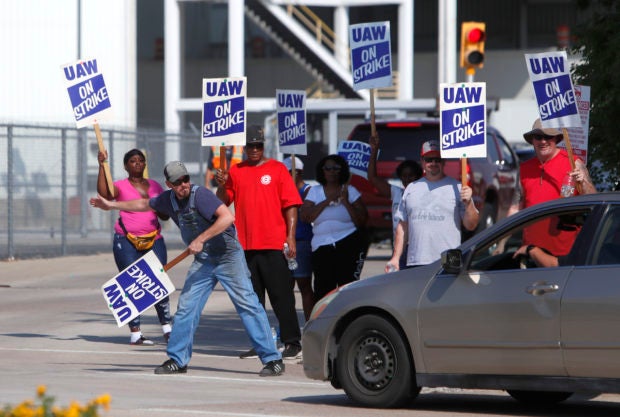 Gary Allison, left, waves while standing with other union members picketing outside the General Motors Plant in Arlington, Texas, Monday, Sept. 16, 2019. More than 49,000 members of the United Auto Workers walked off General Motors factory floors or set up picket lines as contract talks with the company deteriorated into a strike. (AP Photo/LM Otero)

The new factory would be in addition to a proposal to make electric vehicles for a company called Workhorse, the person said.

It’s unclear how many workers the two plants would employ. The closures, especially of the Ohio plant, have become issues in the 2020 presidential campaign.

President Donald Trump has consistently criticized the company and demanded that Lordstown be reopened.

Kristin Dziczek, vice president of labor and industry for the Center for Automotive Research, an industry think tank, said the letter and resumption of contract talks are encouraging signs. “It makes me think that both sides are probably closer than it might have seemed before,” she said.

But both Dziczek and Art Wheaton, an auto industry expert at the Worker Institute at Cornell University, say GM left out key details when it made part of its offer public, and working out those details could make the strike last longer.

“I think GM kind of sabotaged some of the negotiations by going immediately to the public,” Wheaton said. “It really distorts the offer.”

The strike shut down 33 manufacturing plants in nine states across the U.S., as well as 22 parts-distribution warehouses. It’s the first national strike by the union since a two-day walkout in 2007 that had little impact on the company.

Any agreement reached with GM will serve as a template for talks with the other two companies.

LATEST
Secure balloons during lockdown birthday, graduation fetes—PG&E
Who would be the first to get a COVID-19 vaccine?
Fil-Am entrepreneurs find ways to ride out Covid downturn
PH diplomatic posts in US to mark June 12 online
PG&E offers STEM scholarships of up to $10,000
Serial Entrepreneur Dennis “Donato” Agalli Steps Up to Help NYC First Responders During COVID-19
MOST READ
usa Kellyanne’s part-Filipina daughter, 15, scorches Trump
usa Filipino bus rider in Vancouver told to ‘speak English here’
usa Filipino in NY kills own mother, a Covid survivor
usa Why leaders who terrorize people need ‘anti-terrorism’ laws
usa Police in So. California arrest woman who harassed Asians
usa Hundreds of Filipinos at risk in California have yet to be tested – survey
usa Anti-Terror Act is itself an act of terror