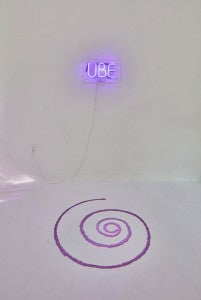 OAKLAND — M. France Viana is a self-confessed idolatress, a “devotee of sacred art.” Born and raised in the Philippines, she is deeply conversant with the animism, folk religion, and shamanism that underlie mainstream Catholicism there (by far the largest religion in the Philippines). Analogously, as an American-trained artist, France thinks like a conceptualist whose works — minimalist in manner — are objects that enact ideas. The twist is that the “content” for her conceptual art is something like a combination of Philippine mysticism, fertility goddess, symbolism, and manna from heaven (food). 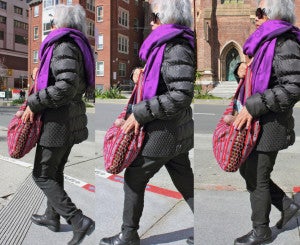 Ube, for example, is a ubiquitous Philippine dessert made from boiled and mashed purple yam. It shows up often in France’s work (currently on exhibit at the Mills Art Museum as part of the 12 Degrees Exhibition): as the wall-mounted neon word UBE; as a floor spiral made of powdered ube root (in reference to the ube roll dessert, as well as to earth art—Robert Smithson’s famous “Spiral Jetty” in particular); and as a performance prop (humorously phallic ubes protruding from a series of fancy purses carried by women during an “Ube Promenade” through San Francisco’s newest cultural district, SOMA Pilipinas.) 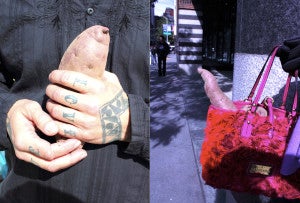 Performers in the event carried ube in fancy purses throughout SOMA in a pseudo-smudging ritual. © photo O.M. France Viana

In “Untitled (Venus/95 Theses),” a digital photograph shows a grey wall riven with ninety-five nails shaped like the Venus of Willendorf, a reference both to the Paleolithic stone figurine and to Martin Luther’s religious tract, “95 Theses,” that was nailed to the door of a church, thereby questioning Catholic dogma and leading to the Protestant Reformation. 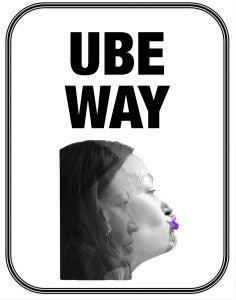 As an artist, France knows enough about the canon of American high modernism, the first and second waves of feminism, post-colonial liberation, and traditions of the sacred in art and everyday life to move among their discourses with a messianic passion, making miracles by turning ube into manna. 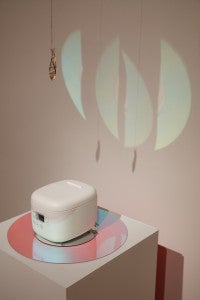 France uses Filipino foods as subject and medium to illustrate myths, as in this work, Stop and Smell the Tuyo (For Baci), currently on exhibit at the Mills Art Museum. Photo © Phil Bond 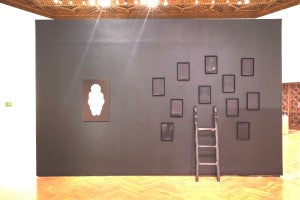 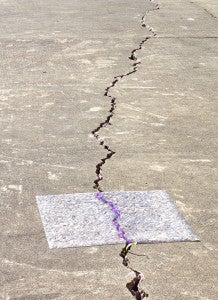 In another performance intervention, France filled pavement cracks at the Mills Art Museum grounds and several SOMA sites and ube haleya (purple yam jam), inserting photos of one site on top of cracks in the other site to reference the Filipino Diaspora. Photo © Phil Bond

About the author: Jeff Kelley is a curator and critic and has written for Artforum, Art in America, and the Los Angeles Times. Kelley was a consulting curator of contemporary art at the Asian Art Museum and curated the critically acclaimed Half-Life of a Dream: Chinese Contemporary Art from the Logan Collection for the San Francisco Museum of Modern Art.  Kelley lives in Oakland with his wife, the artist Hung Liu.