Disunited States of America on 9/11, democracy in free-fall

Disunited States of America on 9/11, democracy in free-fall 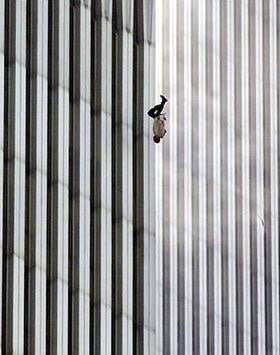 Whenever I want to get a sense of 9/11, I just look to the famous AP photograph. Not of the buildings going down. Of the unidentified man. Just a glance. It’s all I can take.

For me more than the names being read to a bell chime, and the fake solemnity of the current president, nothing captures the horror quite like the moment of the falling man. The falling, tumbling person has never been identified.

In that sense, it could be all of us. Victims and survivors. On that day and today. We can all feel the quiet horror of the day. A metaphor for our American democracy? Our country?

I have always thought since that Sept. 11 the day had the power to unite our country. But in the USAUT (United States Under Trump), the great divider has done it again.

We went through the motions, but the country was not united. I saw Trump speak at the Pentagon on television Wednesday, and I’m nearing the conclusion that Sept. 11 may have lost the power to unify us beyond a day.

I couldn’t believe Trump would use the occasion to be his fig leaf for that ill-advised meeting with the Taliban at Camp David, the place of historic accords.

Trump also used 9/11’s solemnity of peace and unity to sabre-rattle about the United States and Afghanistan. Consider it just two more incoherent moments in the USAUT.

I visited Ground Zero in 2013, the 12th anniversary. On that day, I stood by the memorial waterfalls and marveled at how diverse the names were. I saw the engraved name of Chin Sun Pak Wells.

Sunny Wells, as she was called by her friends, was the quintessential American patriot. Born in Tongduchun, Korea, her family moved to Lawton, Oklahoma, when she was a child. An honor roll student in high school, she worked for a few years at Walmart, then joined the Army. After a tour of duty in Korea, she wound up an administrative assistant to the Deputy Chief of Staff for Personnel at the Pentagon.

But she knew she wanted to study medicine in her life after the military. This week, as 9/11 turns 18 this week, a teenage milestone, we recall how the honor society teen Chin Sun Pak Wells might have been Dr. Sunny Wells today. Later this week, on September 13, Sunny Wells would have been 43, if not for that momentous day in 2001.

Sunday School with Jimmy Carter in Plains on 9/11

On the 15th anniversary, I happened to be in Plains, Georgia. And that’s where I happened to catch Sunday school by a president who knew how to talk honestly about 9/11.

Jimmy Carter was blunt in his assessment of our country when I met him in 2016.

“We lack inspiration, we lack the idealism to set our goals high. We’ve been satisfied with mediocrity. And I include myself,” Carter said. People want an average life, instead of aspiring to be, “outstanding, or superb or brilliant or exceptional. And that is a problem we have,” said Carter. “We set our goals too low, we’re complacent, we’re satisfied with where we are.”

And then he applied his Sunday school lesson to the historic day of 9/11. We’re diminished as a country, and our goals for our nation’s future are set too low, he said.

“I’m afraid that our country and its effect on people of other nations has suffered from the aftermath of 9/11,” Carter said. He “didn’t want to brag,” but said his goal for the country was always to be “superb and be a country that promoted peace and human rights…While I was in office, we never dropped a bomb, lost a missile, or fired a bullet.”

Too much has changed, he said.

“Since 9/11,” Carter said, “we’ve pretty much abandoned our commitment to human rights as we reacted to terrorism.” He lamented that Afghanistan has become the longest war in American history, a direct outcome of 9/11, as well as the invasion of Iraq, which Carter called “unnecessary.”

Carter, whose administration took us out of an energy crisis, also pointed out how the U.S. is still suffering from a financial crisis that has exposed a deep inequality that has divided us as a people.

“We’ve become distrustful of people who are different from us,” Carter said. “We used to be a proud heterogeneous nation…and now we are fearful…and we’ve become poorer as a country.”

Presidential honesty from Jimmy Carter. That was three years ago.

After a first term of Trump, rising stock market or not, on Sept. 11, 2019, do we find our country heading in the right direction?

The Supreme Court has paved the way for the administration’s most anti-immigrant policies.  Asylum seekers stay away. Bahamian hurricane victims, not wanted. Rich people only. The rest—who cares? Corporations get all the advantages. Profits over the environment. Over people. Regular folks? Find a way to get rich, selfish and greedy.

This is our American Democracy after 9/11, eighteen years later. After the attack, it used to unite us all beyond just a day.  Now under our divider-in-chief, it’s a different day, as divided we fall.

Emil Guillermo is a journalist and commentator. He writes a column for the Inquirer North American Bureau. Twitter @emilamok. Listen to him on Apple Podcasts.