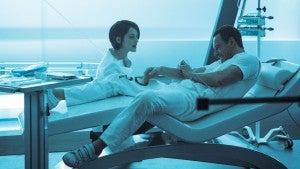 Prepare for a visionary new take on the action-adventure genre. Based on the blockbuster video game series from Ubisoft,“ “Assassin’s Creed” is a world-spanning tale of one man who finds himself at the center of an ancient battle between two powerful sects. Only by harnessing the memories of his ancestor, which are contained within his own DNA, can he end the conflict and claim his own redemption.

Marked by tragedy at an early age, Cal Lynch (Michael Fassbender) is a convict facing capital punishment when he gains an unexpected second chance at life, thanks to the mysterious workings of Abstergo Industries. Through a revolutionary technology that unlocks the genetic memories contained in his DNA, Cal is sent back across the centuries to 15th-Century Spain. There, he lives out the experiences of his distant relative, Aguilar de Nerha, a member of a secret society known as the Assassins who fight to protect free will from the power-hungry Templar Order. Transformed by the past, Cal begins to gain the knowledge and physical skills necessary to topple the oppressive Templar organization in the present day.

Released in 2007, “Assassin’s Creed“ dropped players into the heart of the Crusades, imagining a world in which the bloody, centuries-long war between the Assassins and Templars had defined much of human history. The game became an instant blockbuster, spawning no fewer than eight sequels and a slew of popular spin-offs that have sold more than 100 million copies worldwide. The series has transported players to the Italian Renaissance, the Foundation Of America, the Golden Age of Piracy in The Caribbean and Revolutionary France.

The Assassins are interested in protecting free will, while the Templars are interested only in power and subjugation of free peoples. The Templars want to effectively control everything, make life very predictable and eliminate chance and opportunity. It’s a much more totalitarian approach. Framing each of the games is the Assassin-Templar conflict of today, in which shadowy biotechnology company Abstergo Industries serves as the front for the Templars, imprisoning Assassins and using a device called The Animus to tap their genetic memories and uncover the secrets of their ancestors.

Adapting “Assassin’s Creed” for the big screen, the movie introduces a new character to the established canon–Cal Lynch. A descendant of several lines of prominent Assassins, Cal is a career criminal who’s rescued from his own execution by Abstergo Industries, the modern-day incarnation of the Templar Order. He’s forced to participate in the Animus Project and relive the memories of his ancestor Aguilar de Nerha, an Assassin during the Spanish Inquisition. As Lynch continues to experience Aguilar’s memories, he begins to gain an understanding of his traumatic past and his role in the centuries-long conflict between the warring factions. It’s about a man who learns who he is through the experiences and lives of those who have come before him.

If you’re naïve to what your bloodline is, how do you make sense of certain emotions that you might feel that are actually inspired by your DNA? That’s an integral and dynamic part of the concept of “Assassin’s Creed” that elevates it from just being a game. A modern-day character who goes into this machine called the Animus that takes him back? It’s not a time travel machine, it’s a memory travel machine. On top of that there’s the war between the Templars and Assassins and understanding that it’s centuries long.

The “Assassin’s Creed“ universe seems to lend itself very nicely to a cinematic experience. “Assassin’s Creed“ is a mammoth game in terms of its penetration all over the world. There’s a whole world of people who know all of the rules and all of the by-laws and the history and all of the various characters that make up the “Assassin’s Creed” gaming experience. He doesn’t have a lineage he can feel he belongs to. He’s a bit of a lost soul. He’s always been drifting in and out of correctional facilities. Conversely, Aguilar is very much somebody that belongs to the Creed. He has a cause. He’s been following that cause. Cal’s journey is the heart of the project. Through learning the truth of his ancestors, Cal gains perspective on his troubled past and begins to move toward a place where he truly understands and embraces his role in the world.

Sofia Rikkin (Marion Cotillard) is a scientist at the Abstergo facility who introduces Cal to the Animus project. The goal of her research is to find a cure for violence, or so she believes. She thinks she’s working for a noble cause. She’s very passionate about her cause, but she has a humanity in her that is interesting. Abstergo means purified in Latin. And Sofia is trying to improve the human race and discover what ignites violence in a human being. She’s genuinely trying to find the cure. She’s fascinated by human beings as well as science.

One of the greatest successes of the “Assassin’s Creed” franchise has been it’s clever marriage of real history with it’s heightened fantasy. The Assassins and the Templars are both real groups whose philosophies were in diametrical opposition, and whose embrace of secrecy led to much speculation about their motives. The Assassins are drawn from Hashashins Of Nizari Islam, characterized as a secret order that followed a figure known as the Old Man On The Mountain. Over the course of 300 years, the Assassins killed hundreds of important targets, and in fact the word “assassin” originates from this group. The Crusaders, who form the backdrop to the first “Assassin’s Creed” game, found the clan particularly fearsome, and their legend was further embellished in Crusades’ stories told by Marco Polo.

The Knights Templar, by contrast, was a Christian order established for nearly two centuries during the Middle Ages. Officially sanctioned by the Roman Catholic Church, Templar membership included some of the most important and feared figures of the age, and the group held enormous power and influence until it’s dissolution in 1312. It’s sudden disbanding at the height of it’s power led to a belief that the organization had simply gone underground, where it continued to exert it’s influence.

“Assassin’s Creed” imagines a world in which neither one of these groups fully disappeared, instead waging a silent, centuries-long war with one another and deciding the course of real human history through their actions. Many historical figures factor into the games, and the movie is no different, revealing Tomas de Torquemada, for example, as a Templar enforcer that the Assassins must stop during the most brutal days of the Spanish Inquisition.

In the world of “Assassin’s Creed,” the Assassins are characters who live by stealth, as opposed to the typical warrior of the time who would have a big sword, who would have shields, who would ride horses. The Assassins have hidden blades attached to their wrists with leather armbands, and they use these weapons in order to be able to kill at close range. The Assassins live by several key tenets but one is paramount; that they work in the darkness to serve the light. One of their credos is that you hide in plain sight. So they’re very good at camouflaging themselves. They’re very good at blending in, and then they create enormous social disorder, because no one is expecting that they’re there.

The future of “Assassin’s Creed” on the big screen promises to be as lasting as that of the games on which it’s based. The characters that are in the story are so engaging and so interesting that you’re going to want to see them go on. With all the history that we’ve been through, there are a lot of different places they can go. It seems to be very current and very applicable to the world that we live in. It’s all about power and tribes and beliefs and faith, and all those things that drive men into places of intense darkness.