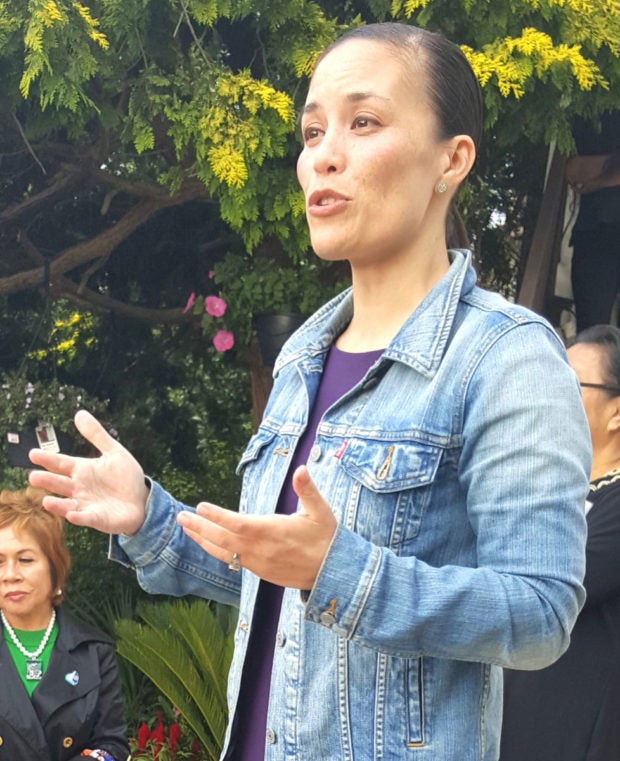 Reinvigorated candidate for Texas’ 23rd congressional district Gina Ortiz-Jones said she would be honored to be the first Filipina American in Congress, but that it was more important that she not to be the last. INQUIRER/Jun Nucum

SAN FRANCISCO – Gina Ortiz-Jones, the Fil-Am U.S. Air Force war veteran from Texas who narrowly lost her recent bid for Congress, expressed guarded confidence before Filipino supporters here that her run for the House will be successful this time around.

Spunky Ortiz-Jones, who missed winning the 23rd congressional district Texas post by a mere 926 votes to formidable (but now retiring) Republican incumbent Will Hurd, feels that she has the momentum that will carry her to victory come the November 2020 polls.

Ortiz-Jones believes that Hurd, who massively, outspent her in the last elections, saw the writing on the wall and had to announce his retirement before the next election campaign began. She is not taking any chances though and, together with her team, is working very hard to ensure victory.

Ortiz-Jones is a U.S. Air Force veteran, who served as an intelligence officer in Iraq, was a special adviser at the Defense Intelligence Agency, senior adviser for trade enforcement and was a director for investment focused on protection of intellectual property in the Office of the U.S. Trade Representative under Presidents Barack Obama. She resigned in disgust over President Donald Trump’s policies.

Ortiz-Jones disclosed that her district is so large it runs from San Antonio to El Paso and also covers 40% of the border with Mexico. It is, sadly, one of the most medically underserved parts of the state where one in ten kids in the country lives; 45% of these kids, she added, rely on Medicaid for insurance.

She prides herself as a first-generation Filipina American that adores her role-model and mentor mother, Victorina Mendenilla of Pangasinan, a graduate of the University of the Philippines Diliman who humbly came to the U.S. as a domestic helper and as a single mother raised two daughters. Gina’s younger sister, Christy, still serves in the U.S. Navy.

“I carry with me my mom’s sacrifice and example. And I look forward to making sure that our voices are heard,” Ortiz-Jones pledged. ”I look forward to bringing out our life’s experiences to that point.”

Ortiz-Jones feels that many of the issues affecting Filipino American community like health care and immigration policies are issues that face every American.

“We need people that are advocating the policies that strengthen all of our communities,” Ortiz-Jones stated. “Reduced school lunch prices, subsidized housing are critical investments, not handouts that allowed me to earn a four-year Air Force ROTC scholarship, a college education and earn several degrees at Boston University.”

She is saddened though that the President Donald Trump “continues to take our country to the direction that is not to the interest of who we are as a nation and people are truly seeing what are at stake when he espouses racist rhetoric and economic policies that makes us less economically secure.”

Ortiz-Jones lamented that the largest massacre of Latinos in American history happened “not 1819, not 1919 but 2019” in El Paso  weeks ago, and considered it a consequence of  Trump’s rhetoric.

“Four of the ten deadly mass shootings in our country have happened in Texas. As a veteran, I know exactly how dangerous these assault weapons can be. I trained in the M4 but I went through an extensive background checks and extensive training that handled all these weapons safely,” Ortiz-Jones shared.

“We (should) have these weapons of war off the streets. We need people in Congress who are going to make sure our kids are safe, who are not being complacent and silent because they are too busy cashing in checks from gun lobby.”

She is also very concerned that the Trump administration is “raiding the Department of Defense (DOD) budget,” and halting 127 military projects that affect military readiness, to build his $3.6-billion border wall. 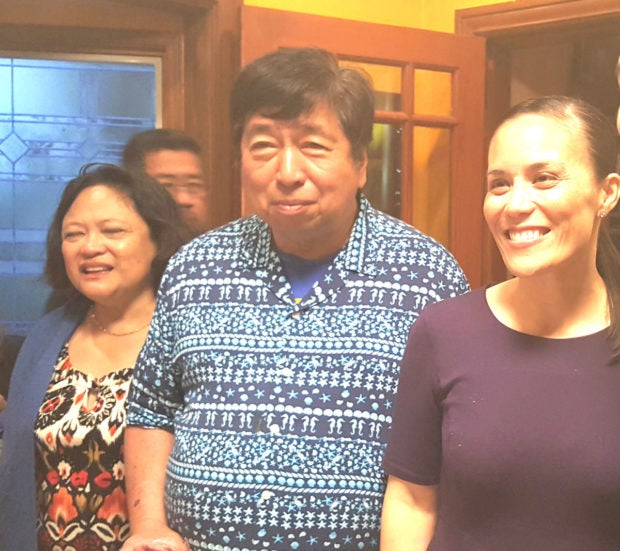 Ortiz-Jones said, “It’s unfortunate that the Commander-in-Chief implements policies that do not honor and respect the sacrifices that of service members and civil servants make,” such as declaring that children of servicemen born outside of the U.S. should not become automatic U.S. citizens,

As a parting message, Ortiz-Jones promised not to let her guard down despite her momentum heading to the polls. She beamed that she would be “honored to be the first Filipina American in Congress, but it is more important for me that I will not to be the last.”

Staunch supporter Rodel Rodis, who hosted the gathering for Ortiz-Jones, said the candidate needs money to sustain her campaign and asked the Filipino community in San Francisco to help her get to Congress.

“She was eager to meet the Filipino community. She will be our voice in Congress to address the many issues affecting our community. But we cannot expect her to do that if she does not win, and she needs our financial support. That is what this event was for,” Rodis stated.