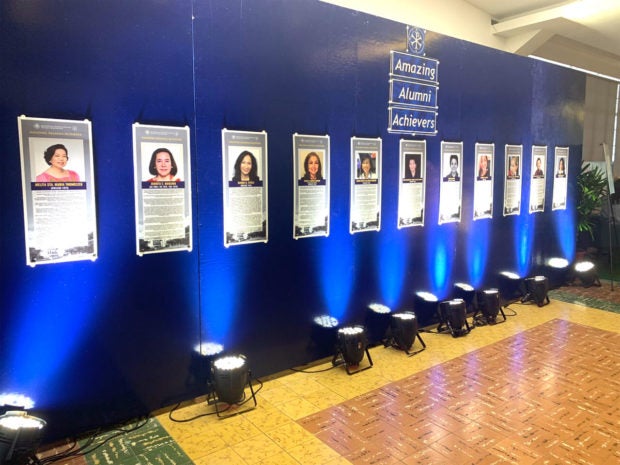 The Triple A Gallery reflects inclusion and diversity of the laureates. CONTRIBUTED

Two Filipino Americans doing humanitarian work from opposite coasts of the United States were among 11 graduates of Maryknoll/Miriam College to receive this year’s top honors from their Alma Mater.

Gloria “Yoya” Dino-Steele of the Washington, DC region and Rosario “Cherie” Querol Moreno of the San Francisco Bay Area were named Triple A or Amazing Alumnae Achievers, the school’s recognition of graduates who have distinguished themselves for embodying the Maryknoll values of academic excellence, communication skills and social responsibility.

MC74 Business Administration grad Gloria Dino-Steele is the acting Assistant Administrator of the Bureau for Asia at the U.S. Agency for International Development.  USAID leads the U.S. Government’s international development assistance programs that save lives, reduce poverty, strengthen democratic governance, help people emerge from humanitarian crises, and build self-reliant countries that can progress beyond assistance.   She oversees USAID’s development assistance programs in 25 countries in Asia, amounting to over $1.2 billion per year. 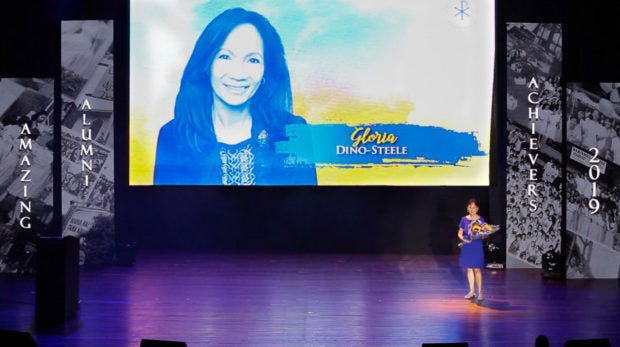 From 2010-2015, Yoya served as USAID’s Mission Director in the Philippines.  With a budget of approximately $1.0 billion over the five-year period, she supported the Philippine Government’s programs to treat and control the spread of tuberculosis, reduce maternal and child mortality, improve the quality of basic, vocational, and higher education, mitigate corruption in government, strengthen the capacity of civil society, improve environmental management, and support the growth of livelihood opportunities throughout the country.

Under her leadership, the U.S. Government gave the Philippines grants amounting to $143 million for the survivors of Super Typhoon Haiyan in 2013.  The assistance included food, water, shelter, the construction of hundreds of schools, health clinics, and sari-sari stores, and $4.0 million worth of funds to finance microenterprises. Since joining USAID in 1980, Yoya has devoted enormous time and passion improving the lives of disadvantaged people in Africa, Eastern Europe, and Asia.  For her work in international development, she has received three Presidential awards—the highest recognition given to senior executives working in the U.S. Federal Government.

“Fearless” is how members of ALLICE Alliance for Community Empowerment describe their founder and executive director, MC74 Communication Arts grad Rosario Concepcion Mencias Querol Moreno, a journalist who has dedicated herself to attaining social justice for Filipinos and marginalized Americans.With the same courage in her stories exposing the repressive regime in the land of her birth in Philippine News, the oldest Filipino newspaper in North America, Cherie heads her 16-year-old California nonprofit combating relationship violence through workshops free and open to the public.  Their website www.allicekumares.com reaches thousands around the world seeking education about the issue.

ALLICE made history by mounting a 2005 event highlighting the testimony of a FilAm abuse survivor, who shattered the myth that intimate partner violence does not happen to Filipinos.  The program broke the silence on the issue, assuring survivors they are not alone, emboldening them to seek help from advocates and allies serving with respect and humility. Before then, no Filipina in the United States had spoken publicly about experiencing dating or domestic abuse. 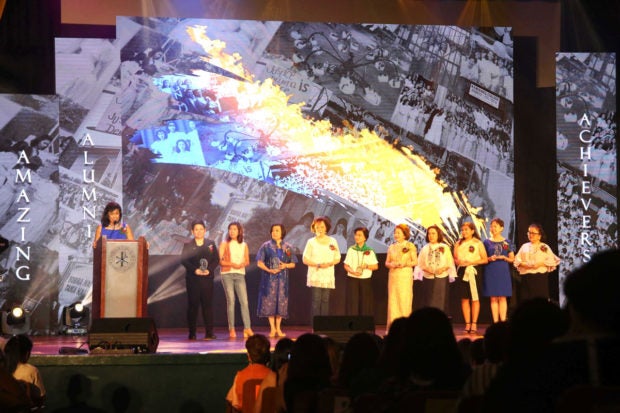 Today, IPV, elder and family violence – previously taboo in “polite conversation” – are key topics in Filipino-American conferences and community fairs thanks to the vision and tenacity of this Maryknoller, whose years on campus reinforced her journalist parents’ constant reminder that privilege comes with responsibility.

Cherie recruited volunteers to encourage individuals and organizations to share resources to educate about the issue. They practice what they preach, model healthy interaction by active listening, offering options, never judging, giving hope and saving lives.  Her leadership has earned countless mainstream and community awards for journalism and public service aimed at giving hope and saving lives.

Maria Nimfa Fallarme-Ronson was the Associated Press Vice President – Sales/Asia before retiring in 2016. She was responsible for all AP international licensing revenue in the Asia Pacific region.

Every day, over 3 billion people see news and information from the AP for its quality journalism, accuracy, speed in delivering news and upholding the truth, the environment MC74 Communication Arts grad Maria worked in for 36 years, rising from the ranks.  She developed AP broadcast markets in Australia, New Zealand, South Asia and the rest of Southeast Asia and oversaw AP’s relationships in China and Japan. When traditional media was challenged by digital devices, she was in the core group of AP senior managers involved in the video and digital transformation of AP news services.

Maria held senior editorial positions in Asia and London for Worldwide Television News, which eventually merged with the Associated Press. In 2014, Maria was awarded the prestigious Oliver S. Gramling Award for Achievement, the highest staff honor of The Associated Press.  She was the first sole Asian woman to receive this distinction in the award’s history.

Retired AP President & CEO Thomas Curley praised Maria “…the finest senior leader I worked with in my 50-year journalism career,” adding her “brilliance, energy and humility she displayed” found only in a handful of exceptional individuals.

Ambassador Melita Sta.Maria-Thomeczek started her life as a career diplomat in 1991 at the Department of Foreign Affairs.

As Assistant Secretary for Personnel and Administration 2011 – 2014, Millie and her team activated the gender and development program of the DFA, and initiated the creation of a wellness and welfare office to handle debriefing, counselling sessions and interventions for its people who have been recalled back to Manila or faced stress and trauma while abroad, especially those in war-torn countries.  This office has been institutionalized in the DFA.

Posted in Bonn, in New York and in Berlin, the MC74 Communication Arts grad followed her lifelong vision as “makatao, makabayan at maka-Diyos.”

The College Class 74 celebrates their sapphire jubilee and the recognition of 5 members of their class of the 11 Triple A awardees. CHERRY S. ALARILLA

As Philippine Ambassador to Germany 2015 – 2018, Millie pursued her goals following a “country-team approach.”  When the PHL-German Agreement to bring Filipino nurses to Germany faced challenges, Millie and her team reached out to health sectors , giving recommendations to POEA–DOLE for improvements. By 2018, the program had hundreds of Filipino nurses employed in the German health care sector.

Amb. Millie encouraged Filipino communities to continue developing champions for the Philippines from the new generation of Filipino-Germans. She also presented the best of Philippine culture to German communities embarked on developmental seminars for the staff and for the Filipino community.  Upon retirement, she received the Felipe Agoncillo Lifetime Service Award by the Secretary of Foreign Affairs.

Mother, entrepreneur, community organizer and activist and mc64 English major Maria Concordia Nicolas-Bonoan was awarded for developing a local line of innovative, affordable, safe and nontoxic toys as well as a healthier alternative to ice cream.  Connie has successfully and tirelessly pursued solutions to what she sees as life’s challenges. Shes blazed trails in Philippine industries, in the communities she has helped, and the lives of those she has personally touched.

Discrimination is something MCHS 93 grad Roselle T. Laput understands, being afflicted with psoriasis, a chronic auto-immune debilitating disease.  She empowers fellow patients who encounter prejudice due to their illnesses. As a senior coach of Psoriasis Philippines, member of Psoriasis Asia and the Pacific, and  speaker for Psychosocial Inclusive Philippines, Sel facilitates sensitivity trainings and guides female patients living with depression, especially those with high suicidal ideation. Since 2016, she has been active role as an incorporators of Pink Women On Fire, a non-profit organization helping children living in the remotest areas.

Veronica Tapia-Merk’s independent-mindedness, social concern, creative expression, and compassion has shown in her 19 years with the Bank of the Philippine Islands, 15 years of leadership in the International Association of Business Communicators, and advocacies for those in need, in promoting culture, the arts and environment, and devotion and love for her family, co-workers and communities. As President, Board Member or Adviser of IABC Philippines since 2002, MC75 Communication Arts grad Roni grew it to set new standards for techologies and skills, and highly-creative and innovative tools.

Filmmaker and MC65 Communication Arts grad Maria Luisa Nebrida is an auteur of advocacy films, her socially-relevant screenplays typically sensitizing viewers toward issues.  To break into the local film industry as a screenwriter during the early ‘80s was a feat in a man’s world.  Baby hosted, produced, directed and wrote “Heart to Heart Talk”, an hour-long weekly show on PTV4 which won the Anak TV Awards for Excellent Programming.

Artist and gender equality advocate Maria Rebecca Ramoso pursues a feminist agenda while advancing the digital art form. The MCGS 90/HS 94 grad creates emotional experiences in her digital paintings to raise the conversation about the place of digital art within the larger context of the art world.   Rebbie’s artwork, “The Long Forgetting,” received the Special Merit award at the 5th Annual All Women Art Exhibition in Florida, USA in January 2016.  She has been spearheading an art auction for the survivors of the Marawi siege in August 2017, with fellow artists from KASIBULAN and ARTVAN.

As Mayor of Pangil, Laguna, from 2004 to 2013, Juanita Manzana brought her skills to the fore to help her community.   The MCGS66/HS70/COL 1974 BA Economics grad completed projects financed by the World Bank such as the Panguil River Eco-Park and the Material Recovery Facility Project, which supported the Municipality’s solid waste management program and the reduction of pollution in Laguna de Bay.

The Japan International Cooperation Agency and Department of Agrarian Reform granted Php70 million for more farm-to-market roads, a potable water system, an irrigation system and a post-harvest facility.  She implemented the Bantay Kalikasan Program for Environmental Protection and Ecological Conservation, courageously pushing through despite death threats from illegal loggers, and never succumbing to corruption.