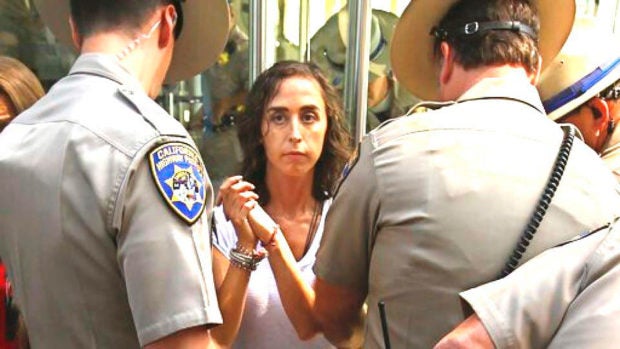 California Highway Patrol officers take into custody an opponent of recently passed legislation to tighten the rules on giving exemptions for vaccinations, after she cabled herself to the doors of the state Capitol in Sacramento, Calif., Monday, Sept. 9, 2019. The state Assembly approved the companion bill, Monday, with changes demanded by Gov. Gavin Newsom as a condition of signing the controversial vaccine bill SB276 which was passed by the Legislature last week. AP PHOTO

The Democratic governor quietly acted less than an hour after lawmakers sent him changes he demanded as a condition of approving the bills, even as protesters outside his office chanted for him to veto the measures.

Legislators approved the changes as protests by hundreds of emotional opponents boiled over, with dissenters delaying Senate debate for nearly two hours by shouting and pounding on walls and doors.

Others were detained by police earlier while blocking entrances to the Capitol as lawmakers scrambled to act on bills before their scheduled adjournment on Friday.

“This legislation provides new tools to better protect public health, and does so in a way that ensures parents, doctors, public health officials and school administrators all know the rules of the road moving forward,” Newsom said in a statement.

The effort was co-sponsored by the American Academy of Pediatrics, the California Medical Association and the advocacy group Vaccinate California, all of which hailed their final approval.

Protesters forced delays in both the Assembly and Senate. They unfurled an upside-down American flag from the Senate’s public gallery in a traditional signal of distress and chanted “My kids, my choice” and “We will not comply.”

They later returned to the Assembly, where they continued shouting “Kill the bill” and “Protect our children” as lawmakers considered other legislation.

Republicans in both chambers objected that there were no public committee hearings before the Assembly approved the measure with a 43-14 vote and the Senate followed on a 27-11 roll call.

“This goes past vaccines and is again a major government overreach,” said Republican Assemblyman Devon Mathis of Visalia, adding that, “Our medically fragile children are what are at stake.”

Newsom demanded a phase-out period for medical exemptions similar to one allowed when California eliminated personal belief vaccine exemptions in 2015. A kindergartener with an exemption could retain it through sixth grade, for instance, while a seventh grader could be exempted through high school.

The companion bill also would allow officials to revoke any medical exemptions written by a doctor who has faced disciplinary action.

The bill would make it clear that enforcement will start next year, meaning doctors who previously granted a high number of medical exemptions won’t face scrutiny.

Republican Sen. John Moorlach of Costa Mesa grew emotional as he recalled a developmentally disabled cousin who died at a young age.

“That’s what these people fear,” Moorlach said of protesters. “We’ve got to hit the pause button.”

Republican Sen. Jeff Stone of Temecula asked protesters to “watch your democratic process with respect” after a shouting opponent was removed from the gallery by officers. B

He also said it is unfair to label dissenters as “extremists” and “antivaxers” when they are concerned about the health and welfare of their children.

Several opponents of the bill were detained before the legislative session as they blocked entrances to the Capitol, including two women who briefly chained themselves to outside doorways.

About 200 opponents earlier filled the hallway in front of the governor’s office, asking Newsom to veto both vaccine bills. They later chanted “Where is Newsom?” and “Veto the bill” from the Senate gallery before leaving when they were threatened with being arrested for an unlawful protest.