Hortense Gerardo’s play in Boston, her dance film on screen in NY in June Gerardo also choreographed and dances in the film “Infinite Corridor,” which will screen at New Dance Alliance’s Performance Mix Festival in New York, also in June.

Gerardo has previously written a one-act play “On the Fabric of the Human Body” and short plays “The Engagement,” “For the Love of Egon” and “Kith and Tell.”

Her short play “Death in Venice Beach,” about a May-December affair of an older woman and younger man, was staged during last year’s festival.

Earlier in April, a staged reading of Gerardo’s work-in-progress full-length play “The Token Fallopians of Middleton Heights” was held, also at the Boston Playwrights’ Theatre.

The play is a dark comedy that follows Meena and her Filipino family as they assimilate in a fictional suburb in Ohio.

The play had started out as a creative non-fiction memoir about Gerardo’s childhood in Midwest suburbia.

Currently a professor of anthropology and performing arts at Lasell College, Gerardo was born in Nashville, Tennessee and raised in Cleveland to physician parents.

“It traces parallel events in the Philippines and in the US from the ‘70s to the present, refracted through the lens of the Asian American immigrant experience.”

Gerardo appreciates the role that staged-readings fill in the process of developing a play. “I received useful, constructive feedback. It was great to hear the audience’s response during the reading. 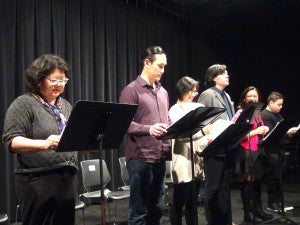 The play will be developed further. “While there are currently no set plans for a full production, the play is perhaps more relevant today than ever before because of the political climate.”

“Infinite Corridor” is a meditation on the motions of walking on two feet, tracking its evolution from great apes to fashion models, and concluding with robots.

“The film was shot along an infamously long hallway at Massachusetts Institute of Technology from which the film derives its title. The creation of biomimetic robots began their peregrinations in close proximity to the walls of the Infinite Corridor.”

“Being an anthropologist informs my work as a writer and as a movement artist, and vice-versa.”

MORE STORIES
Protesters slam demotion of Fil-Am school official in So. California
Fil-Am author Jason Tanamor brings ‘aswangs’ to America
US states with the fewest Covid restrictions
Don't miss out on the latest news and information.