Korina Sanchez-Roxas opens up on her passion for dogs

Korina Sanchez-Roxas opens up on her passion for dogs 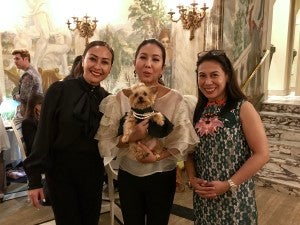 NEW YORK–“Would you like to adopt a dog?” These are the first few words Korina Sanchez-Roxas says when she interviews someone for her long-running show “Rated K” or when she’s caught in traffic and there is a chance to chat with a nearby motorist through an open window. The veteran broadcast journalist is currently in town, asking New Yorkers to help in another way.

Also known in the Philippines for spearheading the “Isang Milyong Tsinelas” campaign, an advocacy to restore the dignity of poor children by giving them slippers, Sanchez is bringing up animal welfare this time.

Together with New York-based philanthropists Samantha Lopez and Carla Villacorta, she hosted a luncheon May 22 at The Pierre Hotel to benefit animal shelters in the Philippines.

“Everybody can actually come together and help me help the dogs. I’ve created a foundation for animal welfare that mainly aims to rescue, rehabilitate and rehome these stray, neglected and abused animals,” Sanchez told the 50 or so donors invited to the event. 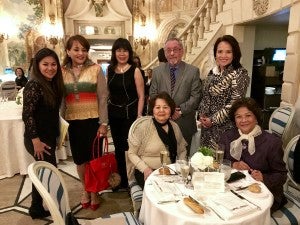 Aida Bartolome (left, seated), founder of the Foundation for Filipino Artists, Inc.—cohost of the charity event with some of the invited guests/donors to Korina Sanchez’s PH Animal Rescue luncheon.INQUIRER/Elton Lugay

Sanchez’s animal welfare foundation is called the Philippine Animal Guardians for Humane Societies (PAGHS). It is the beneficiary of donations made at the event, which are coursed through the Foundation for Filipino Artists, Inc.

According to Christopher Nerviza, former executive producer of “Rated K” where Sanchez is the host, it was the second event for PAGHS. “The first one was a smaller crowd, but today I’m so happy that a lot of people came to hear her speak and made donations,” he said.

Lopez, for her part, was proud of the effort her team put into the charity luncheon. “It’s more about how can you help. It’s not just about money, it’s about your time, your effort in gathering people, and I love that. I love helping people. For me, there’s a sense of fulfillment,” she said.

“I put up a foundation so that I can help other shelters. Every foundation in the Philippines is in need. So, my foundation helps other foundations get back on [their] feet. And I’ve identified six shelters that are responsible. They know what they’re doing, they have a system, they have volunteers. It’s just that they don’t have the funding to work,” Sanchez said in her speech.

The veteran broadcast journalist also narrated sob stories of animal abuse, including a recent report exposing privately owned shelters in the Philippines that use the poor animals to raise funds but neglect them. Many strays continue to wander the streets sick, hungry and dying. Government dog pounds continue to inhumanely euthanize their catch. Many of the dog pounds resort to suffocating them with car engine smoke or bludgeoning their heads with a bat. 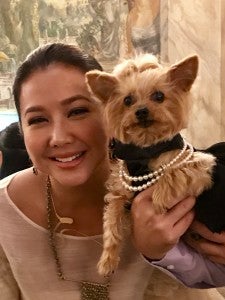 While the illegal dog meat trade has declined, dog slaughterers continue to operate in different parts of the country. Mother cats and kittens are left to themselves, usually to die in the streets. Carriage horses, still in use for kalesas plying tourist destinations, are maltreated without proper food or rest, or medication when they are sick.

Sanchez made particular mention of her adopted dog named Trina, a street dog with deformed hind legs that was given to her by an old garbage collector working near the train tracks of Makati City. The aspin, or asong Pinoy as Filipinos refer to mongrel dogs, is named Trina to reflect this origin.

Sanchez could not resist adopting the pet “because she speaks to me with her big brown eyes.” She added: “Trina is really smart and observant, and a quiet, kind dog who loves and trusts selectively but wholeheartedly. She stays in one of my homes now, with four other playmate dogs and they all get along like siblings. We love her. She loves back.”

When Sanchez heard of a mass killing of 55 captured street dogs in a local dog pound, she couldn’t help thinking that Trina could have been one of those helpless dogs.

“I wonder when the Philippines will catch up with more civilized societies where animals aren’t killed but cared for by the state and its citizens. I do believe animals have hearts and souls too. You just have to look into a dog’s or cat’s eyes looking back at you and you will know. You know. I believe we will one day catch up. Those of us who fight for this day to come should just never, ever give up,” she told the crowd.

Sanchez described in detail how her foundation assists shelters that are in dire need of help. In some cases, they come in with veterinarians, food and vaccines to save dogs and cats that have gone hungry for days.

For a shelter that saved 170 pit bulls from an illegal dog fighting ring, PAGHS built sheds to replace cages that exposed the dogs to the elements especially during typhoons. The organization keeps track of the dogs and cats in its care.

Sanchez tells INQUIRER.net that she hopes to be able to strengthen her foundation and make it credible enough to attract enough funding. 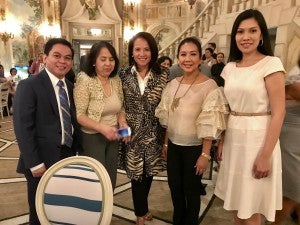 Sanchez with members of the Fil-Am community in New York.INQUIRER/Elton Lugay

”It’s not very easy getting everyone to understand dogs. They understand children, they understand hunger [or] old people, but not everybody understands this level of life. So hopefully, my foundation can help raise that awareness and make things better in the Philippines. I want all the stray dogs out of the streets and I want to get all of the dog pounds have a ‘no-kill’ policy,” she said.

Sanchez declined to answer any question about politics, but graciously replied to one about her husband, longtime politician Mar Roxas, who lost in his presidential bid last year.

What keeps him busy these days?

“He’s into fitness. He’s into enjoying life because he’s always been too busy with work and government. And this is the first long respite he’s had. So, he lost a lot of weight. He’s building on his muscles. He’s walking every day. He does Pilates. He does yoga. We go diving. He’s reconnecting with friends, meets his nephews and son. So, he’s living life as a normal human being would but very richly. I think because he knows this might not be for too long. I don’t know what his plans are, but for now he just wants to enjoy and get healthy.”