A Virginia-based octogenarian Filipino grandmother finally became a U.S. citizen, after passing her citizenship interview 20 years after she became a lawful permanent resident.

Lola Melencia Gaila, 86, originally from Canlubang, Laguna and a green card holder since 1999, could not contain her joy and burst into tears, after she finally passed the written exams and interview that she dreaded taking again after failing in her attempt last year.

She was accompanied in her Immigration and Naturalization Service (INS) appointment by her daughter, Maribel, who hugged her tightly after the successful attempt, and Filipino immigration lawyer Arnedo Varela.

Varela had stood by Lola Melencia ever since she was referred to him last year by Migrant Heritage Commission (MHC), a Virginia-based nonprofit organization that addresses the needs of Filipino Americans and Filipino migrants in the U.S.

“We are happy that she already passed the written examination and naturalization interview. We won’t have a hard time anymore in going back to the U.S. from the Philippines where we usually go back to every two years,” Maribel admitted. “Her ardent wish to become a U.S. citizen even in her twilight years was finally granted.” 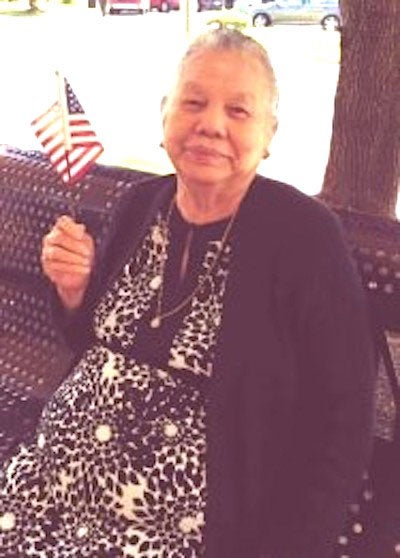 Maribel said that every time they visit Canlubang, Melencia gets sick and has to stay longer in the Philippines to get better before they come back to the U.S.

“As a result, we were always asked by immigration officials why it takes us long before returning to the U.S. Were even warned twice not to do it again. We then decided to    worked for her naturalization that my mother previously did not bother applying for,” disclosed Maribel.

Maribel, one of ten siblings, had been in the U.S. for ten years before she petitioned for her mother Melencia. Three of five Gaila siblings in the U.S. are now naturalized citizens while the others are not. The rest of the Gaila children are in the Philippines.

Valera recalled that Melencia was very nervous when they first met to discuss her predicament after recently failing her citizenship examinations.

“We first obtained a medical certification to exempt her from U.S. History and Civic examinations because of her neurological and intellectual impairment due to old age and related medical issues,” Valera narrated.

“The INS officer, however, ignored the medical certification because the doctor issued an incomplete assessment. The officer then asked Melencia to try to answer the questions that the officer allowed to be translated in Tagalog.”

Melencia accepted the challenge, struggled but persevered to get all the right answers to the questions although she needed more time to collect and reconnect her memories.

The INS officer was also unusually patient and really waited for Melencia to answer the questions, probably in consideration of the applicant’s mental and intellectual impairment due to advanced age.

An appreciative Maribel acknowledged that her mother had an easier time after being interviewed by a kinder, more considerate INS officer and that Valera was there for added moral support,

“The INS officer then started telling a story about her own 96-year-old grandmother from Panama who still walks actively in her neighborhood and is eating well except of course some memory lapses because of old age. She lauded Melencia for being able to raise ten children,” shared Valera.

The INS officer was then told that Melencia was “forced” to be married at an early age of 13 to her husband who was ten years older, to avoid being taken, raped and made a sex slave by Japanese soldiers during World War II, like many other young girls at the time. Melencia then had their first child at age 14.

“Her case is very difficult to work on because there are special requirements to be exempt based on age and number of years as a permanent resident and she has not met that. Besides, she already failed the last citizenship application,” Valera explained. “As an immigrant advocate you really have to present to the officer to give her a reasonable accommodation to respond.”

Valera waxed emotional after getting a warm embraced from a grateful although surprised Melencia as he suddenly remembered his own 89-year-old Mama Connie who died few months ago.