The Latest on the U.S. Open tennis tournament, Canadian teenager Bianca Andreescu has reached the final in her U.S. Open debut by beating No. 13 seed Belinda Bencic of Switzerland 7-6 (3), 7-5. 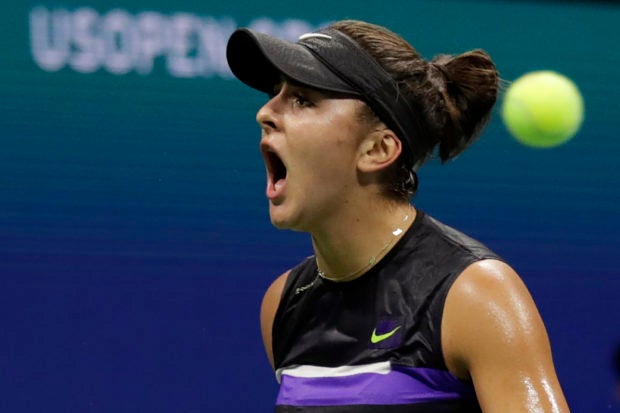 Bianca Andreescu, of Canada, reacts after scoring a point against Belinda Bencic, of Switzerland, during the semifinals of the U.S. Open tennis championships Thursday, Sept. 5, 2019, in New York. (AP Photo/Adam Hunger)

The 19-year-old Andreescu is appearing in only her fourth Grand Slam tournament.
She had never been past the second round at a major.

Andreescu will face 23-time Slam champion Serena Williams for the championship on Saturday.

Andreescu is the first woman to reach the final in her first appearance in the main draw at Flushing Meadows since Williams’ older sister, Venus, did it in 1997.

The 15th-seeded Andreescu trailed Bencic 4-1 and 5-2 in the second set before taking the last five games.

Andreescu overcame a set point while trailing 5-4 then rallied to win the first five points in the tiebreaker.

The winner will face Serena Williams.

Serena Williams beat Elina Svitolina 6-3, 6-1 in the U.S. Open semifinals to give herself another shot at winning a record-equaling 24th Grand Slam title. 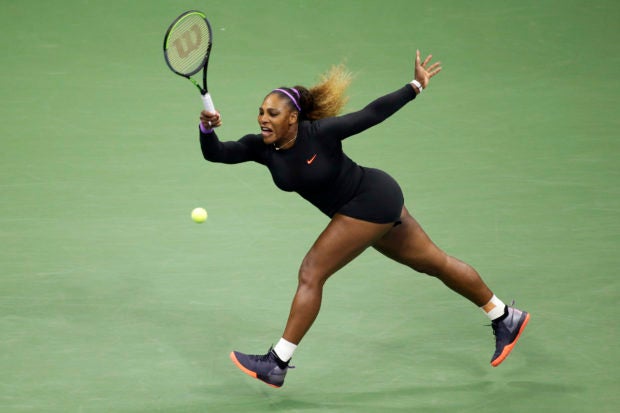 Serena Williams, of the United States, returns a shot to Elina Svitolina, of Ukraine, during the semifinals of the U.S. Open tennis championships Thursday, Sept. 5, 2019, in New York. (AP Photo/Seth Wenig)

A year ago, Williams lost a controversial and chaotic final in New York to Naomi Osaka.

Williams already owns six U.S. Open titles and 23 major championships in all.
That total is a record in the Open era, which began in 1968 when professionals were first allowed to play in Grand Slam tournaments.

The only player with more is Margaret Court, who won more than half of her 24 trophies against amateur competition.

Serena Williams is halfway to a return to the U.S. Open final after winning the first set 6-3 over Elina Svitolina.

Williams pulled out a 12-point game while serving to start the match and then broke on the 18th point of the second game en route to a 3-0 lead.

The No. 8-seeded Williams is seeking a 24th Grand Slam singles title.
She has won six in Flushing Meadows but lost to Naomi Osaka in last year’s final.

Ash Barty is a win away from a second straight U.S. Open women’s doubles title. 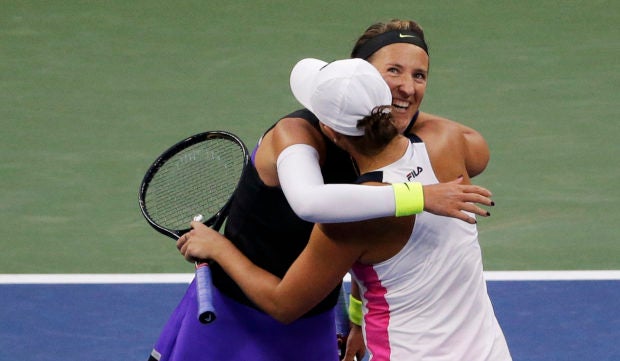 Victoria Azarenka, of Belarus, right, and Ashleigh Barty, of Australia, celebrate after defeating Viktoria Kuzmova, of Slovakia and Aliaksandra Sasnovich, of Belarus, in a semifinal match of the U.S. Open tennis championships Thursday, Sept. 5, 2019, in New York. (AP Photo/Seth Wenig)

Barty won the women’s doubles title last year at Flushing Meadows with CoCo Vandeweghe.
Vandeweghe was still recovering from ankle problems this year so Barty is teaming with Azarenka, who like Barty is a former top-ranked singles player and major champion.

Barty will return to No. 1 in singles after the U.S. Open.

Barty and Azarenka, the No. 8 seeds who beat American teenagers Coco Gauff and Caty McNally in the third round, will face withering the fourth-seeded team of Elise Mertens and Aryna Sabalenka, or Caroline Dolehide and Vania King of the U.S.

Wimbledon champions and No. 1 seeds Juan Sebastian Cabal and Robert Farah have advanced to the U.S. Open men’s doubles final.

They will face No. 8 seeds Marcel Granollers and Horacio Zeballos for the title. 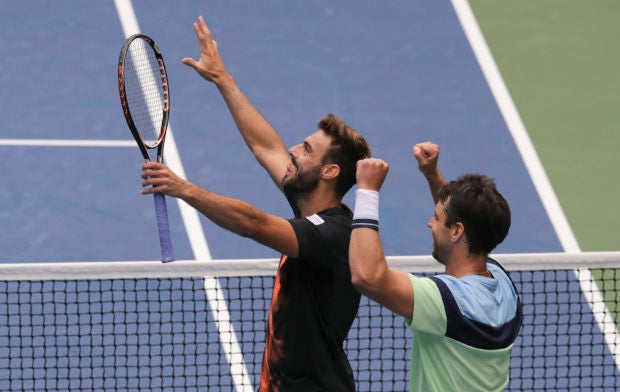 Cabal and Farah are the first men’s doubles pairing from Colombia to win a Grand Slam trophy and to be ranked No. 1.

None of the four finalists ever has won a U.S. Open men’s doubles title.

Cabal and Farah were eliminated in the semifinals a year ago.

The way Naomi Osaka consoled Coco Gauff after beating the 15-year-old American in the U.S. Open’s third round was admired by many.
On Thursday, Osaka was given the women’s 2019 U.S. Open Sportsmanship Award. 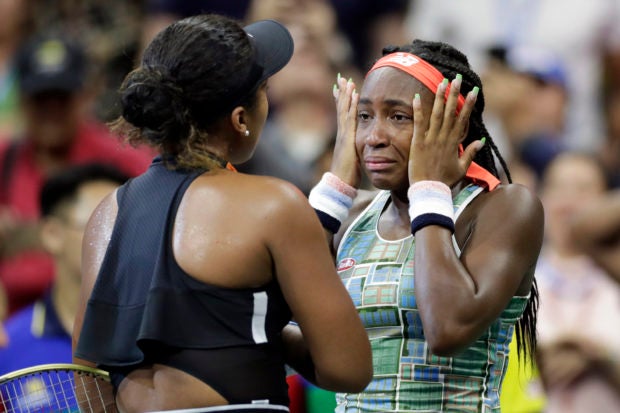 Coco Gauff wipes away tears while talking to Naomi Osaka, of Japan, after Osaka defeated Gauff during the third round of the U.S. Open tennis tournament Saturday, Aug. 31, 2019, in New York. (AP Photo/Adam Hunger)

Diego Schwartzman was the men’s honoree.

Both get a trophy and a $5,000 donation to a charity of their choice.

Todd Martin, the former player who is co-chair of the committee that chooses the recipients, said the two “demonstrated a level of sportsmanship that is even more impressive than their play on the court.” 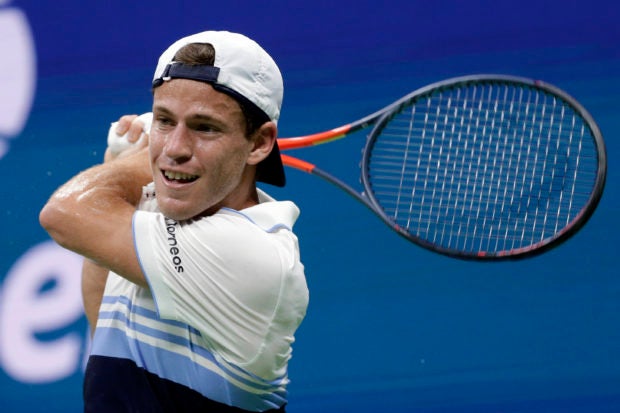 Diego Schwartzman, of Argentina, watches a return to Rafael Nadal, of Spain, during the quarterfinals of the U.S. Open tennis tournament Wednesday, Sept. 4, 2019, in New York. (AP Photo/Seth Wenig)

Serena Williams is once again in the latter stages of a Grand Slam tournament as she pursues her record-equaling 24th major championship.

Only one player in the history of tennis has 24: Margaret Court, who won more than half of hers against amateur competition before professionals were admitted to Grand Slam tournaments.

Williams has lost her past three major finals, including at the U.S. Open last year.

The second semifinal is No. 13 Belinda Bencic against No. 15 Bianca Andreescu. 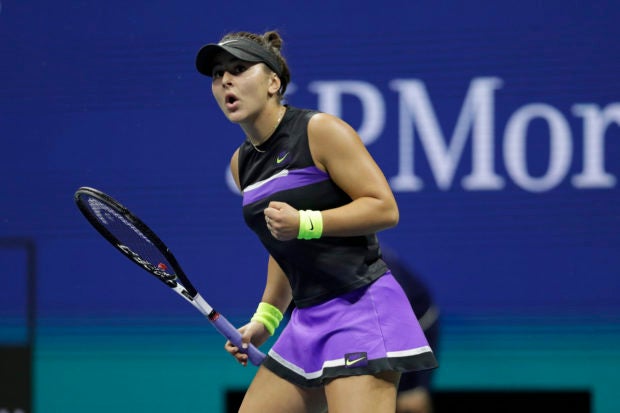 Bianca Andreescu, of Canada, reacts after scoring a point against Belinda Bencic, of Switzerland, during the semifinals of the U.S. Open tennis championships Thursday, Sept. 5, 2019, in New York. (AP Photo/Adam Hunger)

The 19-year-old Andreescu is in the U.S. Open’s main draw for the first time.