Which Streaming Service Is Better For Your Money?

Which Streaming Service Is Better for the Money?

Which Streaming Service Is Better for the Money? Depends… are you intrigued by a drama set behind the scenes of a morning TV show, with Jennifer Aniston and Reese Witherspoon topping the cast?
How about a supernatural series with Lin-Manuel Miranda or a comedy starring Paul Rudd as a man overshadowed by his clone, or the chance to see Oscar-winner Forest Whitaker as a real-life 1960s gangster?

Choose them all, and here’s the potential monthly tab for that modest slice of the expanding pie that is TV in general and the fall 2019 season in particular: about $40.
To be fair, that would provide access to other programs, new or returning, from Apple TV Plus (“The Morning Show”), HBO (“His Dark Materials”), Netflix (“Living with Yourself”) and Epix (“Godfather of Harlem”).

Elite and Hip-Hop Evolution are back, while Sacha Baron Cohen stars in The Spy.

But the small screen is demanding a bigger bite of viewers’ entertainment budget, and there’s no end in sight as streaming services from Apple and Disney arrive this fall, squalling for attention with star-laden and high-concept programs while existing services crank out more shows to keep customers.

Netflix, estimated to spend up to an astounding $15 billion this year on programming, will field some 30 contenders between now and November.

While Netflix CEO Reed Hastings once famously boasted that his service’s true competition is sleep, time is finite for all and money limited for most.

According to the latest findings from research firm Magid, consumers are willing to subscribe to an average of four streaming services.

Pay an average of $42 for them an increase in the average $38 that people told Magid they were OK with spending in 2018, but a drop from the average of six services they were willing to pop for last year.

To aid your media battle plan, here’s a selection of new shows coming your way, along with notable series returns.

The services range from free over-the-air commercial and public TV networks (after $25 or so for a basic digital antenna) to the more-indulgent cable and streaming choices.

“mixed-ish,” ABC, Sept. 24.
Rainbow “Bow” Johnson, Tracee Ellis Ross’ character in “black-ish, “is a preteen fish-out-of-water in this prequel about growing up as the mixed-ethnicity child of hippies and a transplant to suburbia. Mark-Paul Gosselaar and Tika Sumpter are her parents. 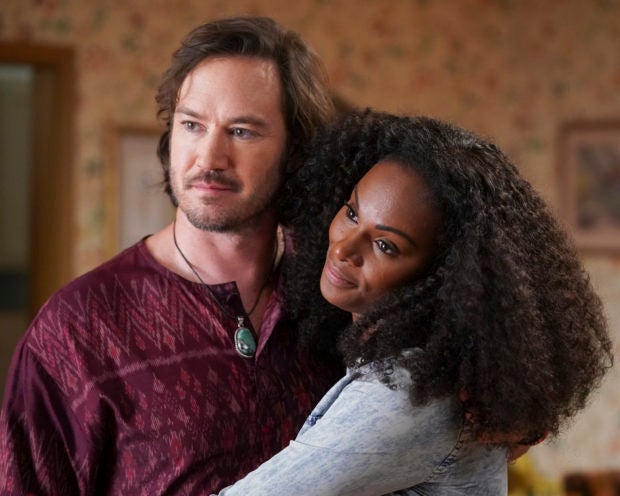 This image released by ABC shows Mark-Paul Gosselaar, left, and Tika Sumpter in a scene from “mixed-ish,” premiering on Sept. 24 on ABC. (Eric McCandless/ABC via AP)

” “Stumptown,” ABC, Sept. 25.
Based on a graphic novel series, the drama stars Cobie Smulders as a veteran with PTSD, a gambling problem and a brash approach to her private detective work. The novels’ creators, including writer Greg Rucka, are among the producers. 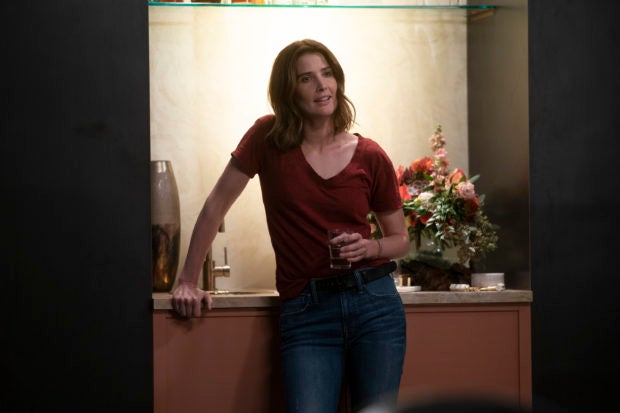 This image released by ABC shows Cobie Smulders in a scene from “Stumptown,” premiering Sept. 25 on ABC. (David Bukach/ABC via AP)

“Evil,” CBS, Sept. 26.
A crime drama from “The Good Wife” and “The Good Fight” creators Robert and Michelle King, with the roots of criminality sharing center stage with proving whodunnit. Mike Colter plays a priest in training, Katja Herbers a pragmatic detective.

“Batwoman,” CW, Oct. 6.
Ruby Rose plays the title character, a Caped Crusader on new ground: She is openly lesbian, a rarity for a TV superhero.
Batwoman is put to the test in a crime-wracked Gotham City, with her dad (Dougray Scott) may be on her side.

“Nancy Drew,” CW, Oct. 9.
The enduring sleuth of book and 1970s TV fame is back and grown up in the series that promises supernatural overtones, a hint of horror and love life for Nancy, played by Kennedy McMann. 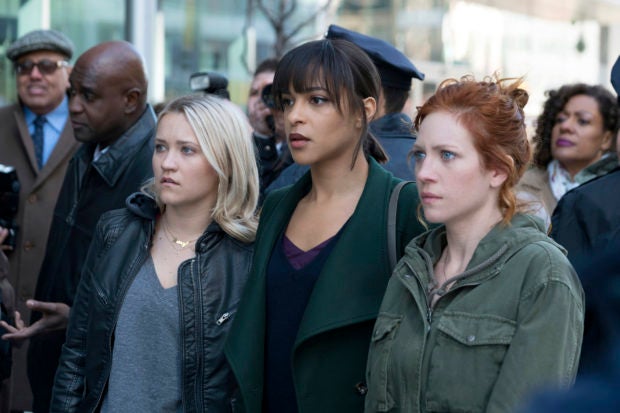 This image released by Fox shows, from left, Emily Osment, Megalyn Echikunwoke and Brittany Snow in a scene from “Almost Family,” premiering on Oct. 2. (Linda Kallerus/Fox via AP)

“Bless the Harts,” Fox, Sept. 29.
Kristen Wiig, Maya Rudolph, Jillian Bell, and Ike Barinholtz are the voice cast for this animated comedy about a Southern family that’s financially challenged but with a wealth of friends and good humor. 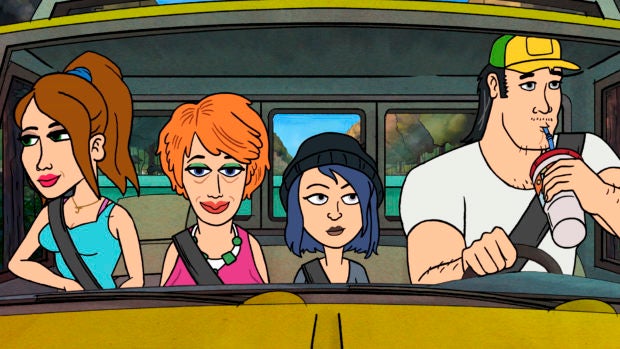 This image released by Fox shows characters, from left, Jenny, voiced by Kristen Wiig, Betty, voiced by Maya Rudolph, Violet, voiced by Jillian Bell and Wayne, voiced by Ike Barinholtz, in a scene from the animated comedy series “Bless the Harts,” premiering on Sept. 29. (Fox via AP) 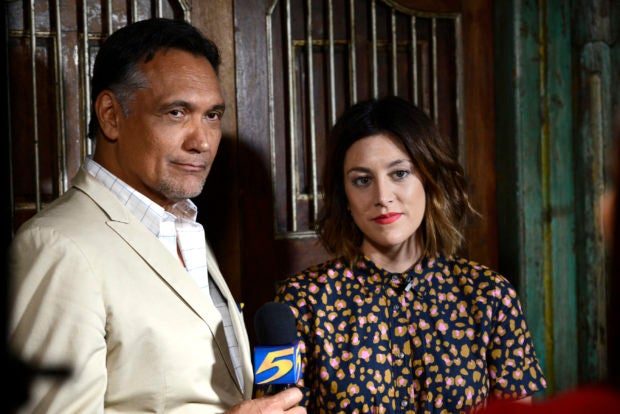 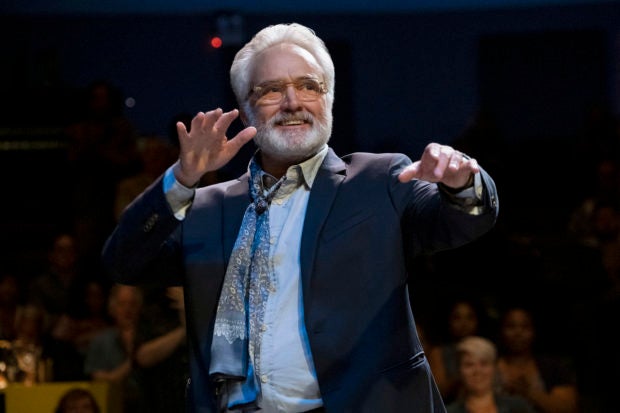 This image released by NBC shows Bradley Whitford in a scene from “Perfect Harmony,” premiering on Sept. 26. (Photo by Justin Lubin/NBC) 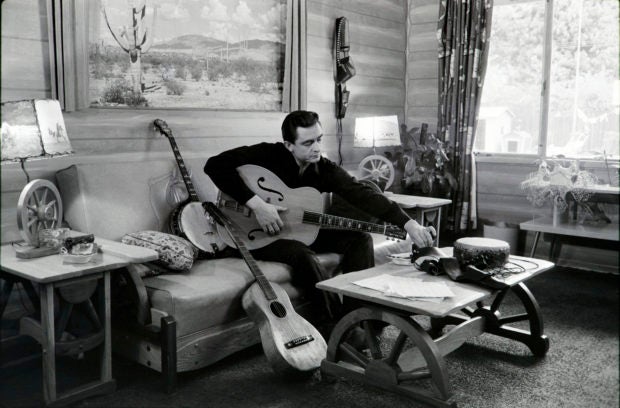 This image released by PBS shows Johnny Cash at his home in California, used in the Ken Burns documentary, “Country Music,” airing Sept. 15-22 and Sept. 22-25 on PBS. (Sony Music Archives/PBS via AP)

“A Very Brady Renovation,” HGTV, Sept. 9.
Maureen McCormick, Barry Williams and the rest of “The Brady Bunch” siblings join forces with HGTV stars including Jonathan and Drew Scott for a makeover on the house used for exterior shots in the 1969-74 sitcom. 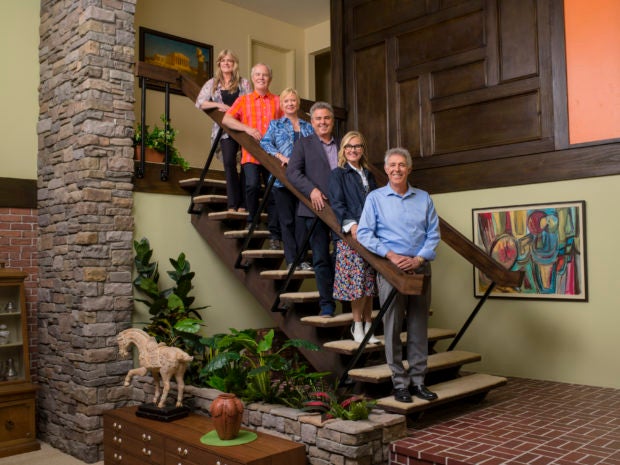 This image released by HGTV shows the cast of “The Brady Bunch,” from left, Susan Olsen, Mike Lookinland, Eve Plumb, Christopher Knight, Maureen McCormick, and Barry Williams. The cast will join forces with HGTV stars including Jonathan and Drew Scott for a makeover on the house used for exterior shots in the 1969-74 sitcom. “A Very Brady Renovation,” premieres on HGTV, Sept. 9. (Matt Harbicht/HGTV via AP)

“Patsy & Loretta,” Lifetime, Oct. 19.
Broadway stars Megan Hilty and Jessie Mueller play country music greats Patsy Cline and Loretta Lynn in a TV movie about their friendship and the challenges they helped each other face. 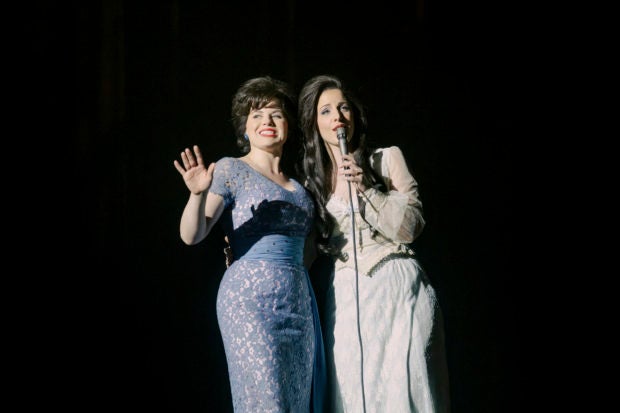 This image released by Lifetime shows Megan Hilty as Patsy Cline, left, and Jessie Mueller as Loretta Lynn in a scene from the film “Patsy & Loretta,” premiering Oct. 19. (Jake Giles Netter/Lifetime via AP)

“The Preppy Murder: Death in Central Park,” AMC and Sundance TV, Nov. 13-15.
The docu-series revisits the 1986 killing of Jennifer Levin by prep school student Robert Chambers, promising new scrutiny of evidence and how gender and status affected the crime’s perception.

“Godfather of Harlem,” Epix, Sept. 29.
Whitaker is a producer as well as lead of the drama series about New York crime boss Bumpy Johnson and his 1960s post-prison life when trouble is afoot in his community. 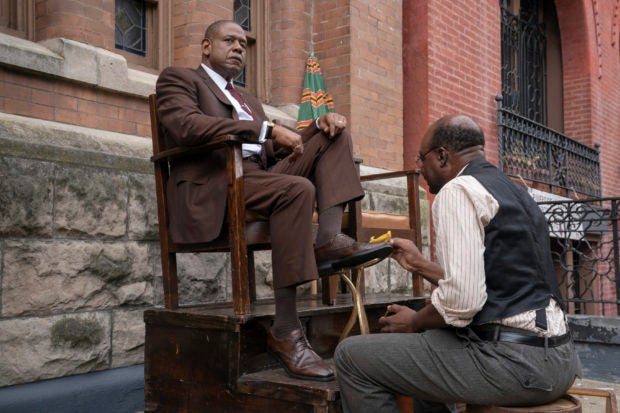 This image released by Epix shows Forest Whitaker as Bumpy Johnson, left, in a scene from “Godfather of Harlem,” premiering Sept. 29. (David Lee/Epix via AP)

“His Dark Materials,” HBO, date to be announced.
James McAvoy, Ruth Wilson, and Dafne Keen join Miranda (of “Hamilton” fame) in this series adapted from Philip Pullman’s trilogy of novels about an effort to unravel a plot against children. 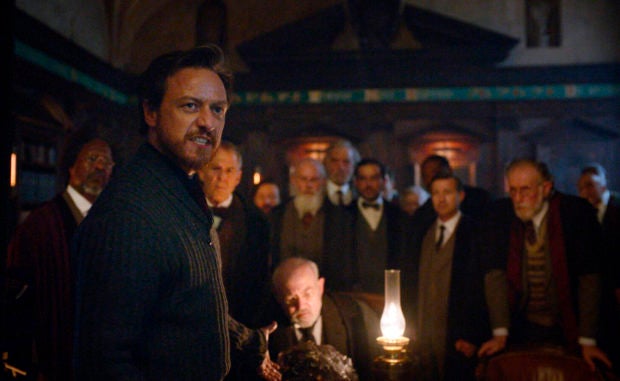 This image released by HBO shows James McAvoy in a scene from “His Dark Materials.” (HBO via AP) 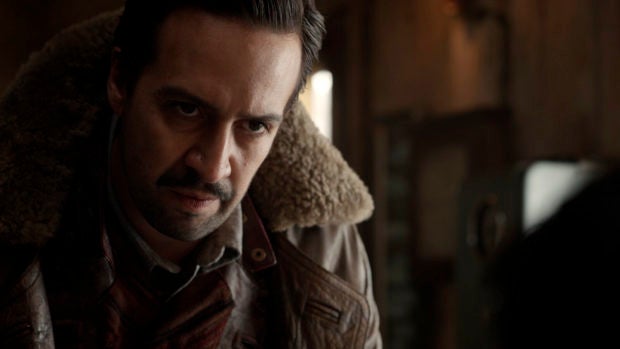 This image released by HBO shows Lin-Manuel Miranda in a scene from “His Dark Materials.” (HBO via AP)

“Watchmen,” HBO, Oct. 20.
Damon Lindelof (“Lost,” ”The Leftovers”) is an executive producer for this drama series inspired by the graphic novel and with a starry cast including Regina King, Jeremy Irons, and Louis Gossett Jr. 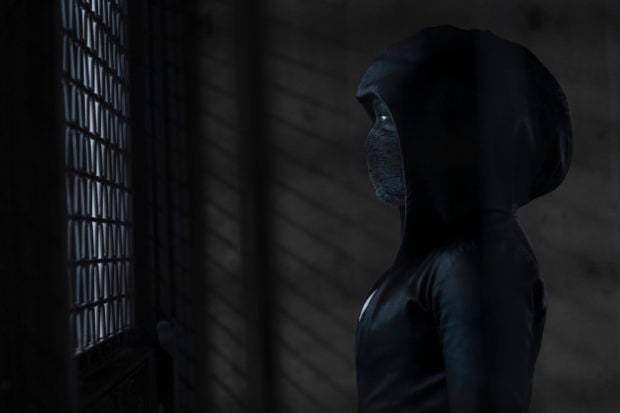 This image released by HBO shows Regina King in a scene from “Watchmen,” premiering on Oct. 20. (HBO via AP)

“Back to Life,” Showtime, Oct. 6.
Miri is out of prison and back home in her small town after 18 years in this British comedy starring Daisy Haggard and from “Fleabag” producers Harry and Jack Williams.

“The L Word: Generation Q,” Showtime, Dec. 8.
Jennifer Beals is back for this sequel to “The L Word,” joined by new cast members including Arienne Mandi and Leo Sheng in an updated look at LGBTQ lives and loves.

“Taken Down,” Acorn TV, Sept. 16.
A Nigerian girl from a Dublin center for asylum-seekers is murdered, with the investigation complicated by refugees’ fears of deportation and trauma.
Lynn Rafferty and Brian Gleeson star. This image released by Acorn TV shows Orla Fitzgerald, left, and Lynn Rafferty in a scene from “Taken Down,” premiering on Monday, Sept. 16. (Bernard Walsh/Acorn TV via AP) 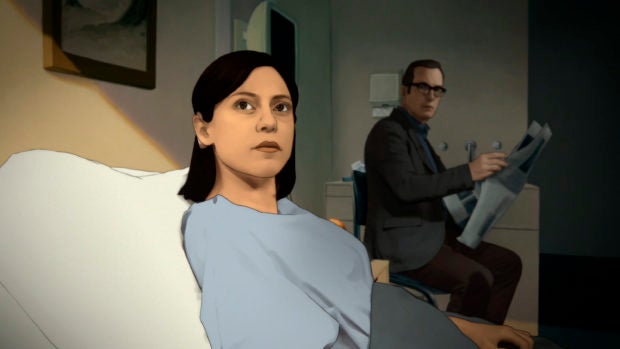 This image released by Amazon shows characters Alma, voiced by Rosa Salazar, left, and Jacob, voiced by Bob Odenkirk in a scene from the animated series “Undone.” (Amazon via AP)

“The Morning Show,” Apple TV Plus, date to be announced. Steve Carell, Gugu Mbatha-Raw and Billy Crudup join Aniston and Witherspoon in a behind-the-scenes look at fictional players in the competitive morning broadcast realm. This image released by Apple TV Plus, Jennifer Aniston, left, and Reese Witherspoon appears in a scene from “The Morning Show,” a behind-the-scenes look at fictional players in the competitive morning broadcast realm. (Apple TV Plus via AP)

“See,” Apple TV Plus, date to be announced.
A futuristic drama about a world left sightless and with its population diminished by a virus.
Jason Momoa and Alfre Woodard are the stars.

“The Victim,” Britbox, Sept. 10.
A four-part miniseries with Kelly Macdonald as a mom who loses her young son to violence and, years later, faces the consequences of her bid for justice. 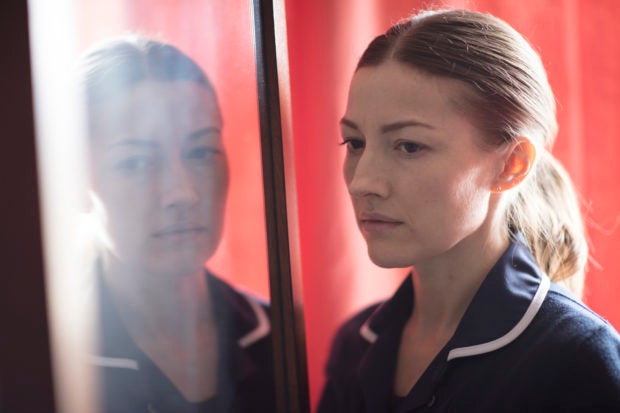 This image released by Britbox shows Kelly Macdonald in a scene from “The Victim,” premiering on Sept. 10. (Mark Mainz/Britbox via AP)

“The Mandalorian,” Disney Plus, Nov. 12.
Pedro Pascal, Ming-Na Wen, and Carl Weathers are among the stars of this “Star Wars” series that takes place after the fall of the Empire.

“Looking for Alaska,” Hulu, Oct. 18.
An eight-episode limited series based on John Green’s 2005 novel of the same name, with Kristine Froseth and Charlie Plummer starring in a tale of young love and friendship.

Fall Movies 2019: Preview for All Ages from Frozen 2 to JOKER

How Much Did Spider-Man: Far From Home Make?

“The Politician,” Netflix, Sept. 27.
Producer Ryan Murphy turns his cynical eye on politics, with Gwyneth Paltrow, Jessica Lange, and Bette Midler along for the ride.
Payton (Ben Platt) is running for high school president, with the White House his ultimate goal.

“Rhythm + Flow,” Netflix, Oct. 9.
A hip-hop competition series led by Cardi B, Chance the Rapper and Tip “T.I.” Harris, with John Legend among its producers and with talent searches in Los Angeles, New York, Atlanta, and Chicago. 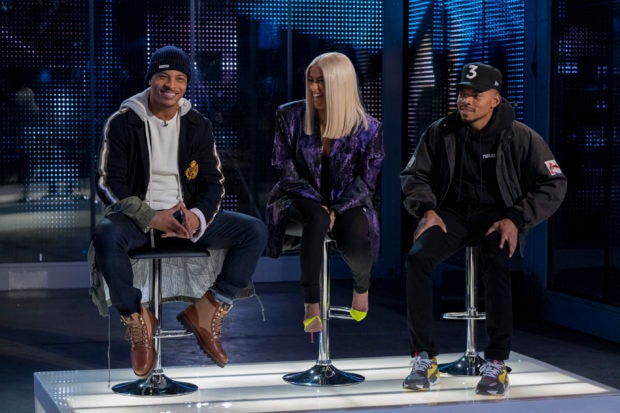 This image released by Netflix shows, from left, rappers T.I., Cardi B and Chance the Rapper from the competition series, “Rhythm + Flow.” (Adam Rose/Netflix via AP)

“Living with Yourself,” Netflix, Oct. 18.
A comedy starring Paul Rudd as a man who’s beside himself when he’s duplicated in an unorthodox spa treatment, but made better, and sees the copy take over his life. 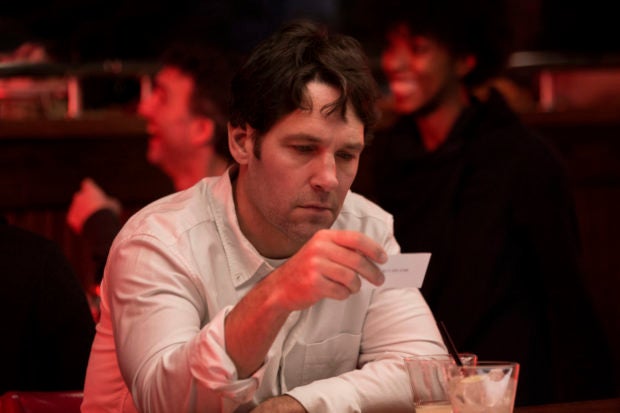 This image released by Netflix shows Paul Rudd in a scene from “Living With Yourself,” premiering on Oct. 18. (Eric Liebowitz/Netflix via AP)

Lynn Elber can be reached at [email protected] and on Twitter at http://twitter.com/lynnelber .

This story has been corrected to show the proper spelling of Forest Whitaker’s first name.