RED DEER, Alberta – A group of immigrants learned in a recent photography workshop that what’s more important is sharing their stories of struggles and victories, not fine technique.

Twenty-four immigrants joined a series of workshops from May to July as photography enthusiasts and now have become amateur photographers.

Entitled “Kwento’t Litrato” (Stories and Photographs) funded by the Alberta Government’s Ministry of Culture and Tourism, an exhibit of the migrants’ work has been held in Calgary and is now in Edmonton.

“When we developed the project, we wanted to leave the migrant community with something more than a one-off coffee table book – we wanted to teach them how to use photography to document their experiences and share their unique stories,” said Nwel Saturay, a documentary photographer who led the group of students. The idea of creating a coffee-table book featuring the life of Filipino migrants in Canada in still frames was brought up to him by migrant advocacy group Migrante Alberta in June 2018.

The collaboration aimed at leaving the Filipino community not only with a book, but more importantly, teaching its members how to tell their story through photography, said Saturay.

A project proposal was submitted to the provincial government in September 2018.

It was not until February of the following year that the group heard back from the government that a grant has been approved. “The government thought it will be beneficial to bring awareness to the community,” said Saturay.

Armed with mostly their cellphone cameras, the 24 participants documented their chosen subjects including youth, senior citizens, church life and the struggles of an activist-mother.

The workshop tackled technical skills in using cameras only as a minor aspect of photography. “We did not want for it to be a competition of the latest DSLR (digital single lens reflex) cameras and gadgets, instead we wanted them to use tools that are most accessible, such as cellphones,” said Saturay. 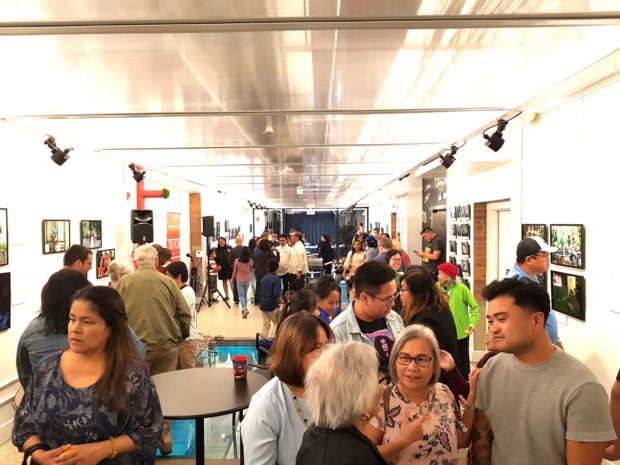 The biggest hurdle for the participants was time, as most of them were workers who held two to three jobs to support their family here and in the Philippines.

Subsequently, finding time to take photos of their chosen theme was a big challenge.

One participant, in fact, had picked a subject too ambitious to tell, Saturay recalled. “It was about reunification. The participant had planned to camp at the airport for several days to take photos,” he said. “We had to encourage them to pursue stories that are closest to them – their own family,” he added. 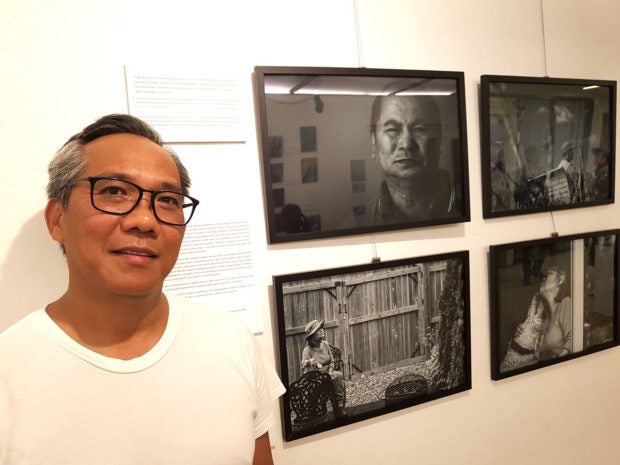 The technical aspect of photography also proved to be a challenge for the participants. The participants had to learn the basics of using DSLR to take pictures.

“The first round of pictures were too dark, or had too much exposure. We had participants of varying expertise, most of whom had no knowledge about photography,” said Saturay.

Photographic snippets of Filipino migrant life in Canada are mounted in an exhibit of the participants’ work now open in Edmonton after a successful run in Calgary from August 17 to 30. The exhibit is currently at the Edmonton City Hall from August 31 to September 7.

The workshops also involved migrants who have become undocumented, conflicted by the Canadian government’s ever-changing policies in immigration and their dreams of becoming successful here.

Edward, 31, who requested anonymity, participated in the photography workshops in Edmonton. “I lost my status (as a worker) in 2017 and chose to become undocumented,” he said. He found support from grassroots organization and felt “it was not the end of life.”

He was a supervisor at Tim Horton’s when his employer enticed him to work at the store for another six years in exchange for $10,000 in payment for processing his permanent status. He left his job and when his working permit was near finished, applied for study permit to restore his status but even this option failed, he said. 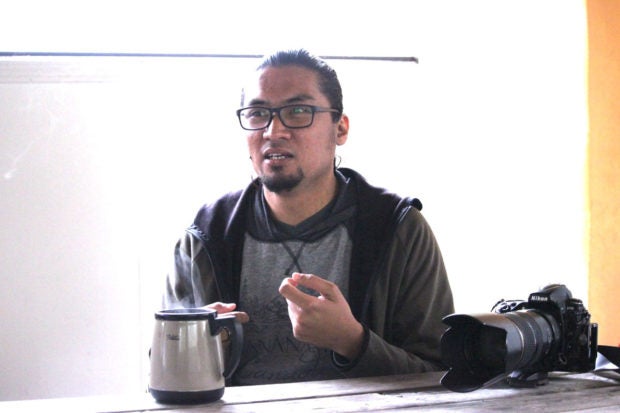 In his photo, he can be seen standing in front of a huge building – his “big Canadian dream.” He wishes to fulfill his dream “in hiding.”

The day-to-day victories of migrants are also highlighted in the exhibit.

A Filipina caregiver took photos of what her day entails, from her waking hour in the morning, to completing her duties at her employer’s home, to taking a bus ride home.

Jay Zapata, 49, chose to capture moments of his father-in-law who has dementia. “We do not often see, or read about the state of our seniors. When we neglect to see their faces and hear their stories, we do [them] a disservice,” he said. Families of migrant seniors often choose to care for them, but with limited family support, the choice is made between sending their loved ones home, or finding a care facility.

Canada native Lionel Migrino, 25, has been living with cerebral palsy, which does not prevent him from pursuing his passion as a photographer. Migrino, also of Filipino descent, was already a freelance photographer for three years when he joined the workshop series.

“I was interested to join the Kwento’t Litrato workshop series because it is all about visual storytelling that brings everyone in the community together. As a photographer, my goal is to help promote a strong sense of inclusivity in our community through photography,” he said.

His pieces spoke to the question “Where are you from?” “I want to spread awareness on how this innocent question can be insensitive because it is questioning where people are really from and if they are Canadian, especially when people of color are asked the question,” he pointed out. 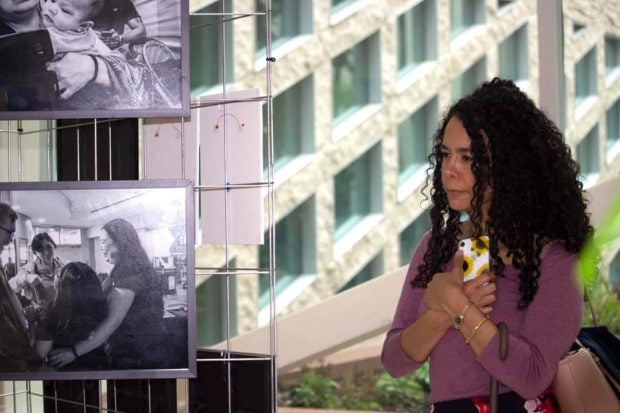 A guest contemplates some of the immigrants’ photos on exhibit. CONTRIBUTED

An undocumented Filipina captured the day-to-day life of her Canada-born daughter, whose privileges as a Canadian could be imperiled by her impending removal from the country. “She is no different from other kids born in Canada, but she has limited access to social services because of my status,” she told this reporter.

“My photo series aim to eliminate this question and to promote inclusivity. Most Canadians have roots (outside of) Canada and knowing that fact my photo series will showcase individuals’ journeys to Canada,” he said.