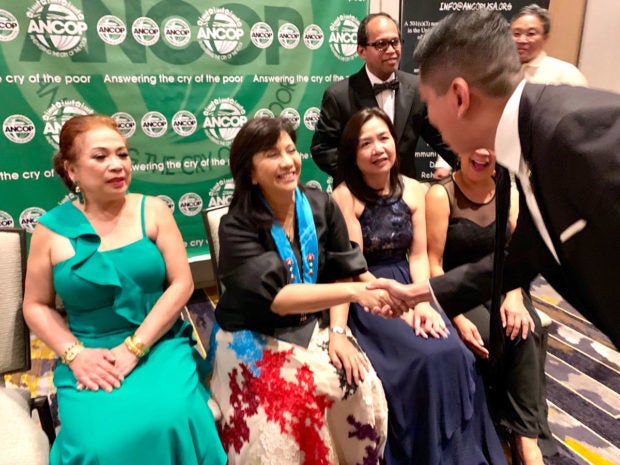 NATIONAL HARBOR, Maryland — Filipinos in America got a glimpse of life in Sumilao, a small town at the foot of Mt. Kitanglad, at the very first charity ball of ANCOP Foundation USA held at the MGM National Harbor last August 31.

While the scenery is to die for in the small town, life for its school-age kids is marred by a 13-kilometer daily trek to school, passing rocky roads and raging rivers along the way. This vivid picture was shared by Philippine Vice-President Leni Robredo as she called on ANCOP USA to help raise funds for a dormitory to house high school boys of the Sumilao National High School.

“We have been to Sumilao many times already to give livelihood trainings and farm inputs to farmers. We have also been able to build a dormitory for girls in Sumilao National High School, with the help of the Rotary Club of Makati, but there is an urgent need for a dormitory for boys also,” Robredo said in her keynote speech before the crowd of about 300 Fil-Ams from all around the United States, mostly D.C., Maryland and Virginia. Building dorms in far-flung places like Sumilao is an intervention of the Office of the Vice President (OVP) through Angat Buhay, its anti-poverty program that seeks to empower communities in need. ANCOP USA is a private partner in the program along with many other charities and development organizations “looking for partners, not just beneficiaries.”

According to Robredo, the pilot dormitory was built in Siayan, Zamboanga del Norte, which had been ranked as the poorest municipality in the Philippines from 2003 to 2009, where students had to literally climb at least two mountains just to get to and from school in a three-hour daily trek that involved crossing swollen rivers during the rainy season.

The OVP considers building dormitories as “the most urgent and effective solution” because not only are the kids safer living on campus, dropout rates have dramatically plummeted since the dorms were introduced. Robredo mentioned that the rent-free dorms are now in place in Sumilao, Siayan and Balangkayan, Eastern Samar.

“We want to comfort the parents of these dormers, so that they won’t have to worry about their children traveling long distances. We want to nurture students’ love for learning, so that they will be ready to conquer the world when the time comes,” Robredo said in her speech.

In an exclusive interview with INQUIRER.net after the program, the vice-president said Angat Buhay takes a holistic approach in empowering the community. Local government executives are first oriented and trained through a bridging leadership program before the OVP decides to officially adopt a community. There are also training programs targeted at women and youth that tackle values orientation, skills, financial literacy and links to markets. “We think the project is more sustainable if there’s ownership,” Robredo told INQUIRER.net, explaining that the OVP shies away from “one-time, big-time things that are not empowering” and emphasizes the development partnership so that Angat Buhay can last well beyond her VP stint.

“Six years lang ako eh, ayaw namin na pagkatapos ko, tapos na din [I only have six years in office. We don’t want it to end when my term is up],” she said.

As of August 16 this year, Angat Buhay has mobilized PhP351 million and helped 405,000 beneficiaries in 211 cities and municipalities nationwide, Robredo said in her speech. It has the commitment of 347 partner organizations and individuals.

“Compared with the budget of big corporations, international development organizations and the administration, this is just a drop in the bucket. But no one can put a price on the transformation and empowerment that is happening in these communities. They are truly priceless,” she said.

The VP took the occasion to thank ANCOP USA, its private partner for more than a year now, for “answering the call of the poor.” Two videos were presented during her speech to show ANCOP USA members the faces and circumstances of the Filipinos they helped. Their assistance came in the form of hip seats and carriers for cerebral palsy patients, nebulizers and other medical apparatus allowing parents in remote areas to give first-aid at home, X-ray machines and medicines for a mental health facility in a remote municipality in Cebu province, medical supplies and vitamins for senior citizens and the urban poor, and rubber boats for flood rescue.

“As we celebrate the fruits of our partnership, another opportunity to help opens up. Children in remote communities are dropping out of school, not because they find it hard to wake up in the morning or because the lessons are too hard, or due to bullying and other big concerns in some big cities. They are dropping out because even if they wake up at three o-clock every morning, they reach their school late, hungry and tired because they live so far away from their place of learning,” Robredo told the ANCOP USA crowd.

The total wellness of poor children and their families is the focus of ANCOP USA, according to Roger Santos, president of the foundation, because it believes that building up good citizens with strong Christian values breaks the poverty cycle.

“ANCOP is not just a charitable organization. It is a ministry of Couples for Christ. All the programs of ANCOP are run and implemented by members of Couples of Christ. These are men and women, young adults, even youths, who go out there to the provinces, the barrios, to remote areas, who come face to face with poor families and marginalized communities. It’s not an easy job but they do it with passion and joy because of their love for the Lord,” Santos said in his speech.