Are you at Burning Man? Or is that the White House resident? 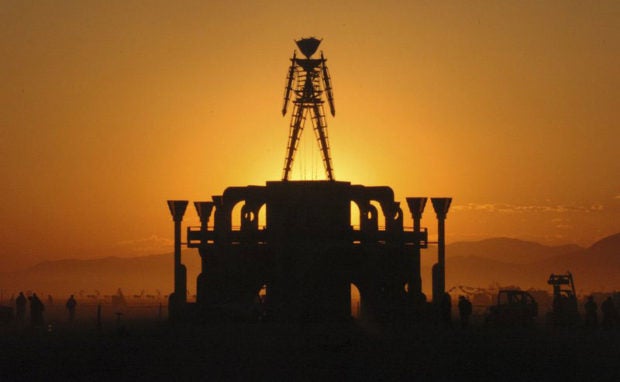 I’m sure there must be some Filipinos at Burning Man. The high desert of Nevada is just the place to escape the Philippine Monsoon season.

I’m thinking about the eccentric arts festival, one of the biggest in the world, because as I drive around the Bay Area, if the traffic seems lighter this week, it’s because everyone who is anyone is said to be at Burning Man. Not me.

Burning Man is not to be confused with an innocent person caught in the Amazon fires. Nor does it refer to the president, whose ears are at least burning and not just because everyone is talking about him.

Burning Man is the art festival that people go to every year to vacate from life and seek their utopian vision. I’m not there, but I know people who go.  Most of them are white, free-spirited, well tattooed nudists. But generally good people. Rich folks. Tech folks. Biker folks. Diverse on a number of levels.

One of my friends is one of the organizers who actually plans and carves out the city known as Black Rock. To her, BM is the grand societal experiment.  An instant self-governing city.

And huge weeklong party in the dust for 70,000 or so fun loving souls. And then in the end, people pick up and leave no trace. The wild is wild again. And the week-long wild go back to their normal lives.

But in the second Burning Man of the Trump era, it just seems strange. Like everything else, Trump turns everything on its head.

Going to Burning Man these days seems to me like Rome fiddling while Nero burns. And make no mistake–Trump/Nero is burning.

FEATURED STORIES
Ex-aide of Imelda Marcos is New York’s No. 2 tax cheat
US immigration 2020 – what’s in store for Filipinos, other immigrants
Get Rid Of a Hickey In 90 Minutes

Much of it is from fake news of Trump’s own making, which only indicates his lack of seriousness in representing all of America to the world.

We’ve already come off a strange week of Trumpster fires when Trump announced that he’d move for U.S. companies to get out of China.

Can a president drop a bomb like that just before he goes off to the G-7 summit? By the end of the weekend, the president said it was just a joke.

You know, like when racists say stuff about Asians and Asian Americans.Did Duterte take it as a joke? But by the start of the new week, Trump had already lied about all sorts of things at the G-7, including missing a key meeting on climate change, lying about it, and then proclaiming himself an all-knowing “environmentalist.”

Signing an environmental impact report to justify your real estate deal does not exactly make one John Muir.

But this is how “the chosen one” thinks, and over the last few days, the leader of the free world continues to top himself, making embarrassing, incomprehensible statements that can only be described politely as erratic behavior.

There’s only one way Trump can possibly live with himself and save face through all this. And that is to think his money—unverified by his sheltered tax forms— somehow makes him smarter, better, or somehow immune from criticism. He’s president, after all.

But at some point, with more than 10,000 lies in the fact-check bank, and with the balance growing with interest, we have to assess the real damage an incompetent president does to the country, the presidency, and the enduring institution of democracy itself.

The president of the United States, whomever he or she is, is the standard bearer of what it means to be free. When the president talks about being president for life, or praises dictators and strongmen around the world for their autocratic actions, degrades immigrants, bans Muslims, harasses people of color….the list goes on and on since the beginning of his short tenure.

So much for satirists to feast on.  But satirists make fun of pomposity. When the pomposity is really the feeble mind of Trump on display, it’s no longer a joke.

We should apply the mercy rule, shouldn’t we? Especially when political leaders laugh behind Trump’s back. Our patriotic self-interest must get involved. They’re laughing at us.

The problem is Trump’s incompetence is becoming so normal. We come to expect the reality show president to say something dumb, like suggesting to buy Greenland or to use nukes to thwart hurricanes.

Or how about banning citizenship to the offspring of military personnel serving abroad? That needed clarifying.

Or building a wall by the election by seizing properties that get in the way—with assurances that an administration folks who do the king’s bidding by stretching the rules would be pardoned.

Dismissed later as a joke. But who’s laughing? Trump’s no longer thinking out of the box. He’s just out of his mind.

Normalization of it all only makes people look to vacate responsibility. Or to stop pointing it out. Frankly, once you call Trump a lying, racist misogynist creep, what do you do?  Simply wait for 2020?

We’ve become so used to the Access Hollywood president that many people are just starting not to care. And that’s dangerous.

We should continue to point it all out. Ad infinitum. Everyday it’s sure to be something. That’s the MO. Has been since 2017.

We could stop and look to utopian visions like Burning Man and seek solace in a completely made up community in the middle of the desert. We feel good and we forget.

Burning Man, of course, is far from perfect. In recent times, some people say even Burning Man with its special corporate sponsorships and high ticket prices, has sold out.

Its utopian sense has evolved–just like our country and democracy in the era of Trump. And not for the good. And in the end we come back to the man who keeps feeding the Trumpster fire.

As I said, Trump turns everything on its head. If you’re at Burning Man, that’s cool.  But these days Burning Man feels especially odd and hedonistic.

Emil Guillermo is a journalist and commentator. He writes a column for the North American Bureau. Twitter @emilamok