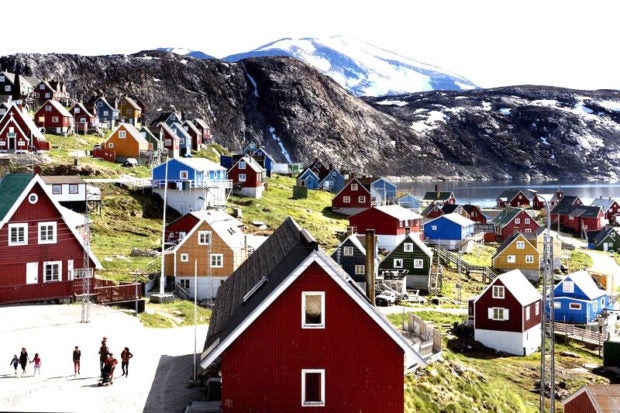 NEW YORK—While it has been abundantly clear from the start of his presidency that Donald Trump is clearly unfit for the presidency, his recent pronouncements are definitive proof that the Orange Man(iac) is off his rocker. He refers to himself as the “Chosen One,” and accuses American Jews who vote for the Democrats as “disloyal,” echoing a well-known anti-Semitic trope.

He hasn’t shot anyone yet on Fifth Avenue, but even if he were to do so, his most ardent devotees wouldn’t turn on him—as he once famously claimed. So it stands to reason that this latest instance of Don the Con being unhinged won’t change their minds either. I know a number of Pinoys who would love to lick his boots, if they could, since they seem to think the man’s racism has nothing to do with them. They do, after all, believe themselves white. Forgive them for they know not what they do.

Trump also expressed interest in purchasing the planet’s largest island, Greenland, from Denmark. In this he wasn’t completely off-base: Harry Truman wanted to buy the island in 1946 but was rebuffed—just as Trump has been rebuffed both by Greenland, which is an autonomous territory within the Kingdom of Denmark, and Denmark itself, whose prime minister described Don the Con’s feeler as “absurd.”

As befits the spoiled child that he is, Don the Con quickly termed the PM’s response as “nasty” and postponed his state visit there. Don the Con probably was not aware—else he would have bragged about it—that in 1917 the U.S. under President Woodrow Wilson purchased what was then known as the Danish West Indies, with the sale price being $25 million in gold. That territory is now the US Virgin Islands.

Trump’s mania for gobbling up real estate clearly has a lot of historical antecedents. The 1803 purchase of Louisiana for $15 million by President Thomas Jefferson from France added a huge swath of land to the U.S.: 828,000 square miles. That purchase was celebrated in 1904, a century and one year later, by the St Louis World’s Fair, which saw about a thousand Filipinos brought over from the islands and exhibited in what was essentially a human zoo. (More on how this came about later.)

In 1867, the United States, headed by President Andrew Johnson, acquired Alaska from Tsarist Russia, for $7.2 million. The latter, which had had the territory early in the 17th century, viewed it as bereft of promise. Alaska became a state in 1959, the largest in the Union. That honor had previously belonged to Texas, which was annexed from Mexico in 1845, becoming a state in 1846. Shortly thereafter the Mexican-American War broke out, from 1846 to 1848, ending in the defeat of Mexico.

As a result, not only did the United States consolidate its hold on Texas, it also gained California, and, according to Wikipedia, “a large area comprising roughly half of New Mexico, most of Arizona, Nevada, and Utah and Colorado. Mexicans in those annexed areas had the choice of relocating to within Mexico’s new boundaries or receiving American citizenship with full civil rights.”

With the defeat of Spain in the short-lived Spanish-American War of 1898, following the Treaty of Paris in December of that same year, Spain ceded Las Islas Filipinas, Guam, and Porto Rico to the United States for $20 million, and gave up sovereignty over Cuba. The Philippine revolutionary government under Emilio Aguinaldo sought to have a seat at the Paris gathering but was denied. Barely two months after, on February 4, 1899, war broke out between the United States and the nascent Republic of the Philippines.

The 1904 St. Louis World’s Fair was intended to showcase the benefits of what the French term mission civilisatrice, or “civilizing mission”: the belief that the colonial overlords had a moral imperative to uplift the indigenous peoples, viewed as racially inferior and over whom they had sway. President William McKinley, a Republican, riffing on that and urged on by Rudyard Kipling’s poem, “White Man’s Burden,” written expressly to encourage the United States to take over the Philippines, declared that the U.S. could not shirk its duty, that it was therefore duty-bound to Christianize and civilize the heathen Filipino.

The demise of the Spanish Empire meant the birth of the U.S. one, and the launch of the American Century. When Trump expresses his aim to “Make America Great Again,” not only is that a nod to white supremacy, but re-sites the country back to a time when the buying and selling of territories and their populations was fairly common. Not surprising in a president who not only is backward-looking but is simply and utterly backward.