By: Isabel Buenaobra - @inquirerdotnet
INQUIRER.net US Bureau/Manitoba Correspondent / 11:23 PM May 18, 2017 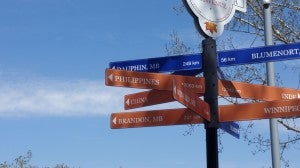 WINNIPEG, Manitoba — At the Variety Heritage Park in The Forks, signposts showing different countries symbolizes Canada’s openness and acceptance of peoples of various nationalities, religion and cultures. The signposts include the Pbilippines

For 6,000 years, The Forks has been the meeting place of aboriginal peoples, fur traders, buffalo hunters, Scottish settlers, riverboat workers, railway workers and tens of thousands of immigrants who have built Canada.

Today, The Forks is Winnipeg’s number one tourist destination with more than four million annual visitors.  It serves as a public place for celebrations and recreation; it has parks, shops, restaurants, a hotel, (and in winter) the longest skating rink in the world.  It also hosts the Canadian Museum for Human Rights, the Manitoba Children’s Museum and the Manitoba Theatre for Young People.  On weekends, musical shows and concerts, group activities and even Zumba sessions are held.  And yes, Filipinos, complete with selfie sticks, join the Zumba sessions. 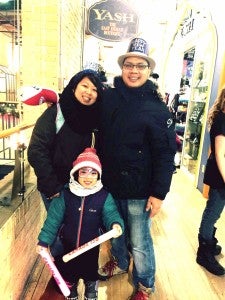 Teresa, Paolo and Georgia Bahlinghasay enjoying themselves at The Forks in Winnipeg. CONTRIBUTED

They were followed by technicians, teachers, office workers, doctors and garment workers who came to Winnipeg in the 1960s. In the 1970s workers in sales and manufacturing started coming, to be followed by caregivers in the 1980s.

In the 1970s more Filipinos came to Canada under the family reunification program.  From the 1990s onwards, about 10,000 to 20,000 Filipinos have flocked to Canada annually. To date, Filipino Canadians number around 660,000; they are the third largest Asian group, after the Indian and Chinese communities, and the largest Southeast Asian group in the country.

What makes Canada attractive to Filipinos?  Its open, less discriminatory and more inclusive policies are reasons cited by most Filipino immigrants.  In practical terms, the health care benefits, free public education and social services outweigh other reasons to stay in Canada.

Such is the case with Teresa Bernal-Balinghasay, an early childhood educator who opted to immigrate to Canada after realizing that her salary at the International School back home was not enough to support a family.  She and her husband, Paolo, had decided early on that migration was the only viable option.  In fact, their wedding invitation mentioned their preference for cash gifts, to help defray immigration expenses.

Teresa recalls a difficult transition phase–with a child barely two years old, it was hard to find employment and day care services.  With no extended family to support them, Teresa and Paolo became self-reliant and independent, away from over-solicitous family members who can unwittingly influence their child-rearing practices, lifestyle and decision-making.

According to Ramon F. Sales, Jr, former chairperson of the University of the Philippines Alumni & Associates in Manitoba, Inc., the associations are reflective of the Filipinos’ regionalistic nature.   In hindsight, Teresa says she has no regrets in immigrating to Canada, citing their purchase of a house after a year’s residency as the highlight of their transition phase.

In contrast, Rolando Vinluan’s transition to Canada was characterized by the traditional mode of reunification with family.  Rolando immigrated to Canada in 1967.  He followed his fiancé and later first wife, Gimena Madayag, to Northern Manitoba where he taught Canadian history for adult learners.  He moved to Winnipeg and worked for 14 years at the T. Eaton department store, once Canada’s largest. After Eaton dissolved because of bankruptcy in 1999, Rolando was employed as a clerk in MTS Centre. 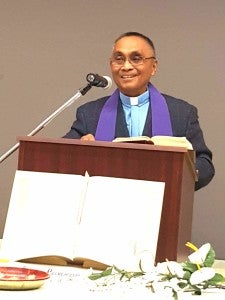 True to the Filipino character, Rolando helped relatives immigrate to Canada; this meant sponsoring their documents, providing shelter, and providing references to those seeking jobs.  Rolando recalls that his house became a halfway-house for new immigrants; he didn’t mind that some stayed for as long as three years.  To date, Rolando has helped more than 50 of his and his first wife’s immediate and distant relatives; those assisted have settled mostly in Manitoba, Alberta and Vancouver.

At 78, Vinluan does not look his age.  A Pangasinense, his face and demeanor remind one of characters in Bienvenido Santos’ novel Scent of Apples, but in a Canadian setting.  Sturdy and resilient, Rolando has survived the emotional and economic challenges faced by Filipino immigrants.  His employment history has been varied—teacher, clerk, insurance broker, real estate agent, and caregiver.

And yet, with the Filipino’s thirst for learning, he became a working student and pursued a master’s in Divinity at the University of Winnipeg.  Although he was ordained a deacon of the Methodist Church in the Philippines, he remained respectful and accepting of other religions.  His knowledge of church history and passion for community organizing led him to found the First Winnipeg Methodist Church, which was reorganized by the Pacific Community Methodist Church in 1997.

After the death of his first wife, Vinluan retired from his work and ministry.  He has remarried (to Veronica Chongco) and has continued to assist relatives and friends taking the immigration route.  He does not expect repayment of “debt of gratitude” from those he has helped.

For prospective immigrants, he has this unsolicited advice: “Work hard and persevere to survive in your adopted country.  If you were somebody in the Philippines, here in Canada you are like everyone else.  Strive to prove yourself.  Study to better yourself.”