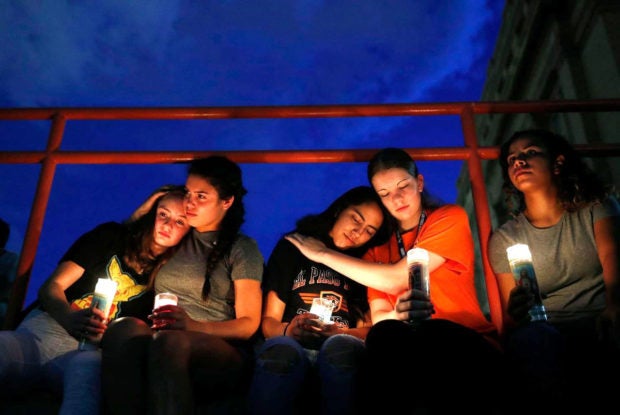 “Mental illness and hatred pull the trigger, not the gun,” Trump said, addressing the nation after a weekend’s mass shootings where 22 lives were lost in El Paso, Texas, another that left nine dead in Dayton.

For someone who consistently treats science and data as nuisances, or ignorable, pointing the finger at mental illness and hatred is convenient.

This idea may well be whirling inside his head:  How it is possible that someone can randomly kill two dozen strangers and not be mentally ill… can a healthy person do that?

A mental illness diagnosis is not always evidence of risk of violence toward other people. Fifty percent of Americans meet criteria for a mental illness at some point in their lifetime, and most will not go on to commit violent crimes, according to Dr. McGinty, an associate professor at the Johns Hopkins Bloomberg School of Public Health.

The American Psychiatric Association reported people with serious mental illness commit only about three (3%) percent of violent crimes.  Thus, studies indicate only a minority of mass shootings have been perpetrated by individuals with recognized mental disorders, according to forensic psychiatrists Knoll IV and Annas.

Nevertheless, post hoc analyses indicate that perpetrators are full of rage and may harbor “fantasies of violent revenge” for real or imagined offenses against them; these may lie entirely beneath the surface until they put the fantasies into action. Such individuals, wrote Drs. Knoll and Annas, function in society and do not typically seek out mental health treatment.

In most cases, therefore, it cannot fairly be said that a perpetrator “fell through the cracks” (as the president was heard saying during his candidacy) of the mental health system. Rather, these individuals typically plan their actions well outside the awareness of mental health professionals, so we are told.

The majority of mental health symptoms examined, including anxiety, depression, stress, PTSD, and borderline personality disorder, were unrelated to gun violence, according to Dr. Yu Lu, a postdoctoral research fellow at the University of Texas Medical Branch.  Moreover, the World Health Organization (WHO) also reported that neuropsychiatric disorders in children could swell by 50 percent by 2020.

The rub is, experts remind us that individuals who carry out these acts very often do not see themselves as mentally ill whatsoever or in need of any treatment or intervention.

A study by Drs. Peterson and Densley reveals that there are commonalities among the perpetrators of nearly all the mass shootings they studied, including: a vast majority experienced early childhood trauma with early exposure to violence; everyone was at an identifiable crisis point prior to the shooting; most studied other shooters’ actions and sought validation for their motives and had the means to carry out plans.

Studies also show that half of all mental health disorders show first signs before the age of 14, and three quarters of mental issues begin before age 24. The rub is, only less than 20 percent of mental health problems receive needed treatment. The disheartening question: How many are under the ACEs clout?

APA president Dr. Rosie Davis forewarned that routinely blaming mass shootings on mental illness is unfounded and stigmatizing. The rates of mental illness are roughly the same around the world, yet other countries are not experiencing these traumatic events as often as we do. Adding racism, intolerance, and bigotry to the mix is a recipe for disaster.

The other commonality is an identifiable crisis point prior to the shootings. Problematic substance use, especially of alcohol, is a major risk factor that could influence whether a person will use a gun to commit a violent crime (but not necessarily mass shooting?), reported the Consortium for Risk-Based Firearm Policy, an advocacy group for gun violence prevention; the alcohol problem often triggers or aggravates other real or ideational crises.

Mass shooters often are angry and despondent because of a specific grievance–a change in job status and relationship rejection or loss often played a role. Such crises were, in many cases, according to Drs. Peterson and Densley, often subtly or sometimes explicitly conveyed to others through a distinct change in behavior, expression of suicidal thoughts or plans, or specific threats of violence.

Human beings are susceptible to suggestion, and the mass media are the biggest source for spreading “affecting” information through 24/7 social media connectivity.  It seems difficult to deny that the media coverage since the late ‘90s has made it certain that those who commit heinous crimes become “celebrities,” noted Dr. Knoll.

The mantra is, my media-guru-kibitzer friend quipped, “You do not exist until you are a ‘star’ in social media.”

Most shooters studied other shooters’ actions and sought validation for their motives; a ‘few’ literally followed scripts that promised notoriety in death, according to Peterson and Densley. Perpetrators study other perpetrators and model their acts after previous shootings. Many are radicalized online in their search for validation from others that their will to murder is justified, perpetuating the copycat syndrome, so we are told.

In 80% of school shootings, perpetrators got their weapons from family members, a study indicates. Workplace shooters tended to use handguns they legally owned. Other public shooters were more likely to acquire them illegally. In one survey of inmates in state prisons who used guns to commit crimes revealed barely one in 10 had bought their own; the rest had begged, borrowed, or stolen guns.

Having access to a gun, coupled with ‘certain personality traits,’ is one such salient risk factor for gun violence.  Individuals having access to a gun are more than 18 times as likely to threaten someone or attempt to harm others compared with those without gun access, according to a study in the journal of Preventive Medicine. If perpetrators had not been able to get guns, they could not have used them in their crimes.

Dr. Carson-Arenas is a Certified Clinical Psychology Specialist, and a former university research director. He is a Behavior Analyst Specialist in Nevada, an educator, clinician, researcher, consultant, and a published author. Dr. Carson-Arenas together with his daughter Abbygale Williamson Arenas-deLeon is preparing a manuscript on Mental Health Principles (For Filipino Students) aligned with the Philippine Mental Health Law signed on June 2018 where portions of this article will be included. Please e-mail at: [email protected]