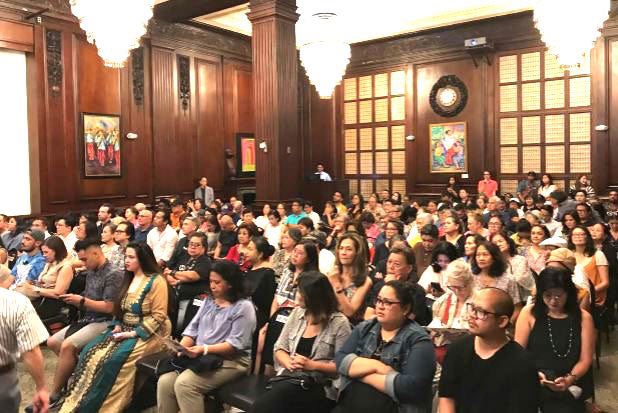 Audience at a jam-packed Philippine Center in New York viewing a lineup of short films during the second night of Sinehan sa Summer 2019. CONTRIBUTED

The short films received overwhelmingly positive reviews from the mixed audience of Filipino, Filipino Americans, and non-Filipinos. One described some of the films as “thought-provoking.” Lola, Mansyon, and “P” elicited much laughter from the audience.

During the talk-back at the end of the screening, film directors Craig Nisperos, Jameelah Rose Lineses, Nicole Dizon, Raymund Eugenio, and Diane Paragaswere at hand to answer questions from moderator Gil Quito and the audience.

Responding to a question about challenges and opportunities they encountered in telling their stories, Mukbang Masarap Director Raymund Eugenio said that “family and food are the two things that always connect us and are always part of Filipino culture.”

Boxed Director Nicole Dizon shared that she wants to bridge the generational gap between her parents’ generation and that of the young Fil-Ams, particularly during this time when culture in America tends to be individualistic.

Yellow Rose Director Diane Paragas shared that it took her 15 years to develop and get the film produced. She added that the final release of the film comes at an opportune time when debate on immigration is intense.

Consul General Claro S. Cristobal presented certificates of appreciation to the directors present and thanked them for allowing their films to be featured in the Sinehan sa Summer.

ADVERTISEMENT
MORE STORIES
Fil-Am Democrats hail Biden’s choice of Harris as running mate
Over 900 US health care workers have died of Covid, at least 25 of them Filipinos
Fil-Am artists push on despite the pandemic
Don't miss out on the latest news and information.