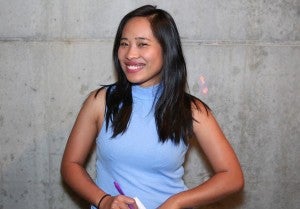 SAN FRANCISCO — Aureen Almario had always considered herself a visual artist, until she took a workshop with Bindlestiff Studio and saw the possibilities of doing theater work.

Nearly two decades later, she has been appointed the new artistic director of the Filipino American theater company.

“Witnessing amazing artists and a creative community that looked like me completely changed my life,” she says.

“For most of my life, performance art was something I would not have dared to do. But the Bindlestiff space and the people in it were inspiring and that empowered me to try it.”

Almario has been a resident artist at Bindlestiff for more than a decade. Her acting credits for the group include productions of “A Pinoy Midsummer,” an adaptation of Shakespeare’s “Midsummer Night’s Dream,” A. Rey Pamatmat’s “Thunder Above, Deeps Below,” staged readings of “Monstress,” adapted from a short story by Lysley Tenorio, and Jeannie Barroga’s “Aurora.”

She first heard about Bindlestiff Studio in college when her friend was part of a poetry reading that was staged there. After watching several of the studio’s shows, she attended Stories High, its annual theater workshops.

“It’s our page-to-stage program where we provide affordable theater workshops in the spring and summer,”Almario explains. It culminates with a show in the fall, showcasing the results of the participants’ efforts.

Almario joined the writing and acting workshops, which resulted in her writing a play, “Forever and Ever” and encountering a dilemma.

They couldn’t find an actress to perform the mother character. What’s a girl to do? Recruit her own mom, of course.

Born in Davao and raised there and later on in Zamboanga and Manila (“My father was in the Philippine Army and my family moved around a lot.”), Almario was ten years old when she moved to the United States, where her family settled in Hayward.

Almario knew that her mother, Rosita, had done a bit of acting in her youth, even doing a short stint with the Manila-based theater group, Philippine Educational Theater Association.

“She’d always tell us the story of how she received a full scholarship for theater arts at University of the Philippines in Davao; but she didn’t accept it because her parents wanted her to be a doctor.”

Mom auditioned and was cast; daughter debuted as a playwright.

She has picked up lessons from these workshops that still influence the way she works today.

“From doing multiple productions, I learned the value of communication, organization and preparation.”

“I became more accountable and committed to see things to the very end. Once I commit to something, I really approach it with serious intention.”

Bindlestiff’s board of directors agrees with her self-assessment. Outgoing artistic director Lorna Velasco says of their selection, “Aureen is a force, full of heart and talent, hardworking and bold. The ‘Stiff is in capable hands. So proud of you, Aureen!”

“They are talented. Our mainstage production this year in October will be Conrad Panganiban’s play ‘Welga.'”

“He’s one of our homegrown artists. He started out attending the Stories High playwriting workshops and later on got a master’s degree in playwriting.”

She adds, “I strongly believe in our Stories High programming and we definitely want to continue with our progress this year.”