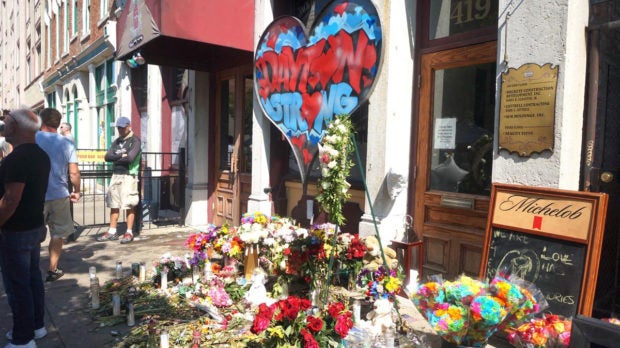 I’ve stopped asking my American Filipino friends if they’re still hanging in there for Trump. I didn’t even call on some Ohio Filipinos as I drove cross country back to California.

I just happened to be in Dayton, one of the latest domestic terrorism spots. I was a step ahead of the president. After some time on the east coast, I’m just trying to get home. Trump’s trying to look like he cares as he began his “Condemn racism, bigotry and white supremacy, I really mean it,” tour.

It’s where presidential responsibility as consoler-in-chief meets campaign self-interest. Prior to last weekend, Dayton’s claim to fame was as the birthplace of the Wright Brothers.

I know some places are missing. No disrespect intended. There are just too many in the recent past to remember. That’s why I felt compelled to drive through Dayton.

It wasn’t just on the way. It’s so I will never forget. You always hope to see some Asian Americans at public displays of political involvement, but usually you don’t.

Then I found what for me, your itinerant reporter/commentator, what was like a mini-holy grail. An Asian American! At Ned Pepper’s bar, the scene of the Dayton massacre.

And he was holding a protest sign. Luong Vo stood out and yelled at the media who had parachuted in and set up shop across the street in order to use the crime as their backdrop.

Vo didn’t want to be just a backdrop. “Save our city,” Vo said aloud in a solo chant, the same phrase that was on his sign. It was a sentiment that other Dayton residents had, as they all took turns speaking out, their rage still thick after a Saturday night that left their city in grief.

Their cries were directed for the world to hear through a wailing wall of media. But it was also a message for Trump. 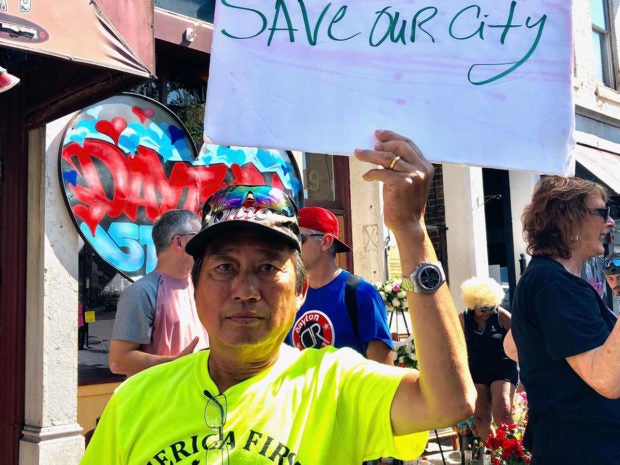 Others didn’t want him there at all. One stationary sign said: “Our grief is not a commodity.”

Vo wasn’t part of the group that wanted the president to go home. Vo stood there as the only Asian American Dayton resident who simply wanted Trump to take action.

And he represented a bit of common ground that might exist in the political equation. Whether black or white, Republican or Democrat, Vo’s sign simply spoke to the pain of Dayton.

“I want to see something happen,” he told me when I asked him why he was there. “I want to help this city. It has suffered a lot.” Vo told me he had lived in Dayton since he arrived more than 30 years ago, without any money or family, and without t knowing any English.

He still spoke in a heavily accented tongue. But he knew English well enough to show his patriotism. “I love this country,” he told me. “If you don’t love America, don’t come here.”

Vo wore an Ohio ball cap, a shirt that said “America First,” indicative of his “love it or leave it” tendencies. On the back of his lime green shirt was the message, “Stop Corruption with Term Limits. Keep our country safe” over an American flag.

It sounded like an old Tea Party T-shirt that a pre-Trump Republican would wear. In fact, in the crowd was the former Ohio governor John Kasich. Vo said he was going to vote for Clinton in the last election, but thought she was corrupt and voted for Trump. Mention corruption, and he goes apoplectic.

“When they become a politician they have no money; after that, they become a millionaire, billionaire. They’re like the Communists,” Vo said in a reference to the politics of his former country. “They love people but they do nothing. The politicians today, we need to get them out. They need to take care of our people first.”

And that’s why Vo’s message is plain and unmistakable. A refrain heard from the majority of protestors. Do something. Don’t forget Dayton.

Trump may have been rich before he got Vo’s vote. But it’s been documented. Trump has enriched himself while president. Vo wants him to take action now, to see what happened and do something. Hopefully, the right thing.

Tougher gun laws? Background checks? Money to restore the city’s faith in public safety? Vo didn’t specify. But he has one point everyone can agree on. Do something. Or else.

He was the loudest voice when I was there, the only Asian American in the crowd. A swing protestor. Not typical of the Trump base. He’s a guy named Vo who votes, who hopes Trump won’t gaslight him or his city. Or else. 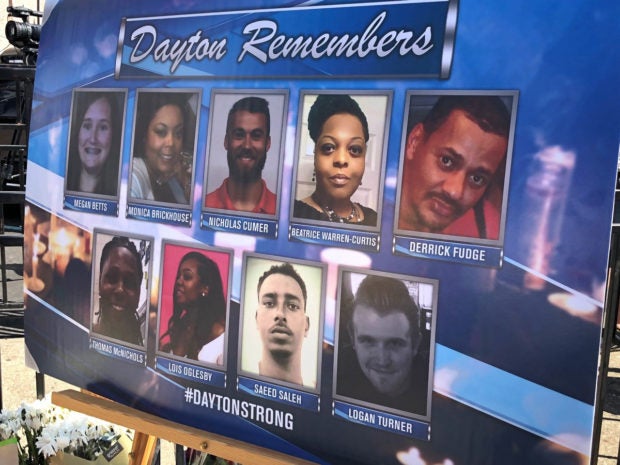 There’s an election in 2020. And Vo hates corrupt politicians. But that’s Vo. There are still some Republicans, Filipinos included who are hanging in there in support of Trump as if “MAGA” was more maganda than it is. Make America Maganda again?  Everything has certainly turned ugly under Trump.

Continuing the drive
I left the scene in front of the memorial at Ned Pepper’s and continued driving through America.

When I left DC, one Filipino friend of mine thought it was crazy. He didn’t like driving. But he really didn’t like America where it was right now. He didn’t feel safe as a person of color.

And he told me that before El Paso and Dayton happened. It’s a strange thing to be fearful of Americans, but Trump’s hate rhetoric is real.

As I drive through Ohio, Pennsylvania, West Virginia, Missouri, I notice I’m too often the only Asian around I started to miss Vo.

I’ve driven cross country before, and I remember being impressed by the confluence of the Missouri and the Mississippi Rivers–when I first saw it in 1978.

This time, it didn’t quite look like everything flowed together as mightily. Just like everything else in America. On this trip, people have been cordial in general. But I still feel the stares. Foreigner. Brown skin.

They still see “the other” in 2019 America. That’s not maganda at all.

Emil Guillermo is a journalist and commentator who writes a column for the North American bureau of the Inquirer.net.