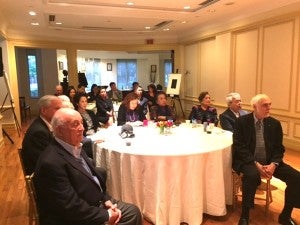 Filipino Americans of Metro DC attend a roundtable discussion on Filipino art and culture held at the Romulo Hall of the Philippine Embassy on May 11. CONTRIBUTED

WASHINGTON, DC — Manila-based artist Celeste Lecaroz led an afternoon discussion on Filipino art and culture at the Romulo Hall of the Philippine Embassy here on May 11.

“I come from a league of Filipino artists who practiced their art in the post-colonial era. What I hope to achieve in this discussion is to show how our lives as artists in the Philippines are shaped by our historical and cultural milieu,” Lecaroz stated. “I have chosen to discuss, the master, Fernando Amorsolo, a young master, Julius Legazpi, and a novice, who happens to be myself.”

Surrounded by paintings of National Artists Fernando Amorsolo and Arturo Luz as well as that of Manuel Baldemor, Lecaroz did an inter-generational comparison of Amorsolo, J. Legazpi and herself. She described the early lives, family backgrounds and respective works, styles and inspirations of the three artists.

Drawing from the lives of these Filipino artists, she suggested a number of comparisons and contrasts. Her primary reflection focused on how their lives followed “the mythical cycle of the hero as an artist.”

Called to be artists as children, leading to an adventure in the arts, there were nevertheless many distractions along the way such as commercial art for the master Amorsolo, the allure of Toon City and Hollywood animation for Legazpi, and the pressures of employment, motherhood and homemaking for her. 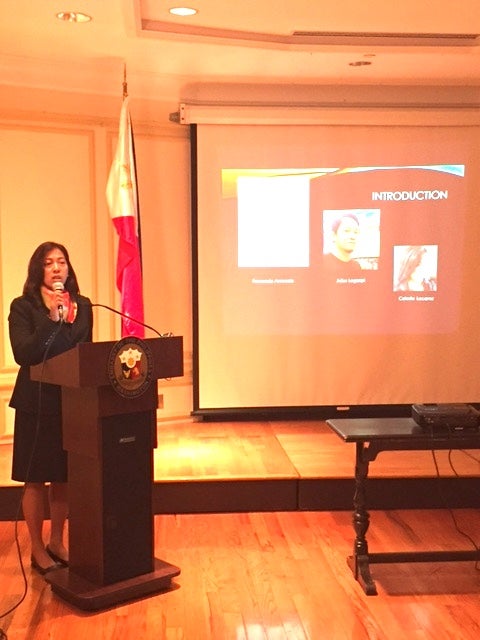 Manila-based artist Celeste Lecaroz speaks on the lives of three Filipino artists–Fernando Amorsolo, Julius Legazpi, and herself, focusing on their works, styles and inspirations. CONTRIBUTED

“But in the end we, followed our bliss. Art was what we wanted. We were going to do this no matter. And, along the way, in this adventure, we meet our mentors who teach us the ways of art,” Lecaroz concluded.

She also noted how galleries are slowly becoming irrelevant to artists and buyers of art because of social media and the internet. The need for conduits or middlemen in the business of art is somewhat becoming irrelevant. In contrast, Amorsolo’s reputation was passed by word of mouth, and recognition took time. Social convergence for artists and adherents is also easier and more accessible today.

On being a woman artist, Lecaroz said that, “I feel today is the best time to be a lady artist in the Philippines. We just had two women presidents, women are no longer just relegated to doing domestic tasks. My strokes are bold and fearless, as bold and fearless as the steps I’m taking in a predominantly male world of art in the country.”

In a second presentation for the afternoon, Paolo Galang, one of the resident artists of the Philippine Embassy, provided a brief survey of hope and inspiration in Filipino Komiks.

After a history lesson on the evolution of American superheroes such as Superman, Wonder Woman and the X-Men, he talked about early practices in the Philippines such as Jose Rizal’s Ang Matsing at ang Pagong (The Monkey and the Turtle), which is considered to be the first Filipino komik. He also narrated the story of the early 1929 satirical portrait of a Filipino called the Misadventures of Kenkoy.

Galang then introduced Mars Ravelo, whom Filipinos embrace as their own Stan Lee, the American comic writer who created a number of Marvel Comics characters. Ravelo created such Filipino superheroes as Varga and Darna. Mr. Galang also described other superheroes like Captain Barbell, Lastikman, Flash Bomba and Tiny Tony. He emphasized the importance of increasing awareness among the Filipino American community, especially the younger generation, that the Philippines also has its own indigenous superheroes.

“These are not only part of the childhood of many Filipinos but are as much a part of their cultural heritage, characterized generally by a constant sense of humor and a prevailing sense of hope,” said Galang. 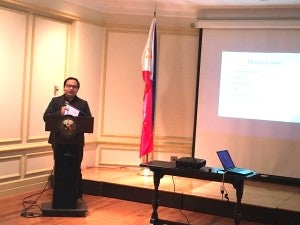 Paolo Galang’s presentation focused on Filipino Komiks, emphasizing the need to spread awareness about the Philippines’ own superheroes among the young generation of Filipino Americans in the U.S. CONTRIBUTED

Darell Ann R. Artates, public diplomacy officer of the Embassy, anchored the discussion on the possible thrusts, direction, priorities and programs of the Sentro Rizal that the Embassy will inaugurate later this year.

The main purpose of a Sentro Rizal, as mandated by the National Cultural Heritage Act, is the promotion of Philippine arts, culture and language throughout the world, including in countries where there are large Filipino communities.

“The establishment of the Sentro Rizal here in Washington DC later this year is important for the Embassy because we want the Filipino American communities in our jurisdiction, particularly their children, to have the opportunity to reconnect with their culture and heritage,” Artates told the group.

At the end of her presentation, Ms. Lecaroz asked the question that another National Artist NVM Gonzalez posed, in reflecting on the work of Philippine artists, “what does this all mean?” It’s a question NVM Gonzalez himself answered simply: “that perhaps through his artistic effort the Filipino can contribute to the dialogue of cultures now going on all over the world…. We cannot hope for too much, but we can do no less.” ###