Mass Shootings Have Latinos and Islanders Worried About Being Targets

Mass Shootings Have Latinos and Islanders Worried About Being Targets

When Michelle Otero arrived at an art show featuring Mexican-American women, the first thing she did was scan the room. Two exits. One security guard.

Then she thought to herself: If a shooter bursts in, how do my husband and I get out of here alive?

Otero, who is Mexican-American and Albuquerque’s poet laureate, had questioned even attending the crowded event at the National Hispanic Cultural Center a day after 22 people were killed in a shooting at an El Paso, Texas, Walmart. 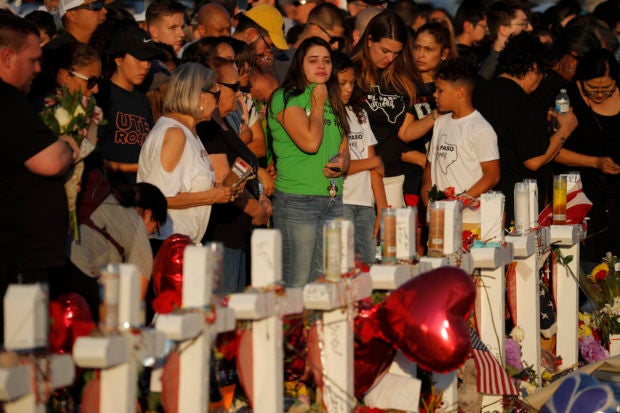 FILE – In this Aug. 6, 2019, file photo, people visit a makeshift memorial at the scene of a mass shooting at a shopping complex in El Paso, Texas. At the growing memorial for the victims of this Saturday massacre, the city’s roots in Catholicism and religion, in general, loom large. (AP Photo/John Locher, File)

That shooting and an earlier one in Gilroy, California, killed nearly two dozen Latinos. The violence has some Hispanics looking over their shoulders, avoiding speaking Spanish in public and seeking out escape routes amid fears they could be next.

The events come against the backdrop of racially charged episodes that include then-candidate Donald Trump referring to Mexican immigrants as “rapists,” Trump, as president, referring to migrants coming to the U.S. as “an invasion” and viral videos of white people chastising Hispanics for speaking Spanish in public. 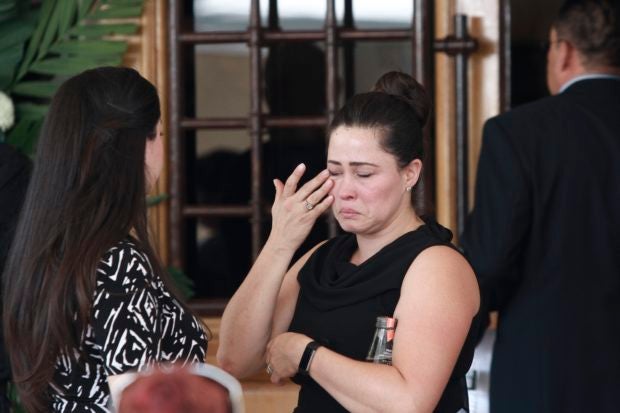 A woman cries at the funeral of elementary school principal Elsa Mendoza, of one of the 22 people killed in a shooting at a Walmart in El Paso, in Ciudad Juarez, Mexico, Thursday, Aug. 8, 2019. Mexican officials have said eight of the people killed in Saturday’s attack were Mexican nationals. (AP Photo/Christian Chavez)

“It’s almost like we’re hitting a climax of some kind,” said Jennifer Garcia, a 23-year-old University of New Mexico student originally from Mexico. “Some people, especially our elders, don’t even want to leave the house or speak Spanish.”

From Houston to Los Angeles, Latinos have taken to social media to describe being on edge, worrying that even standing in line for a Taco Tuesday special outside a food truck or wearing a Mexican national soccer team jersey might make them a target.

Although the motive in the Gilroy shooting is unknown, authorities say the El Paso shooting suspect, who is white, confessed to targeting people of Mexican descent. The suspect also is believed to have written an anti-Hispanic rant before gunning down mostly Latino Walmart shoppers with an AK-47-style rifle. The attack has rattled a city that has helped shape Mexican-American life in the U.S. for generations. 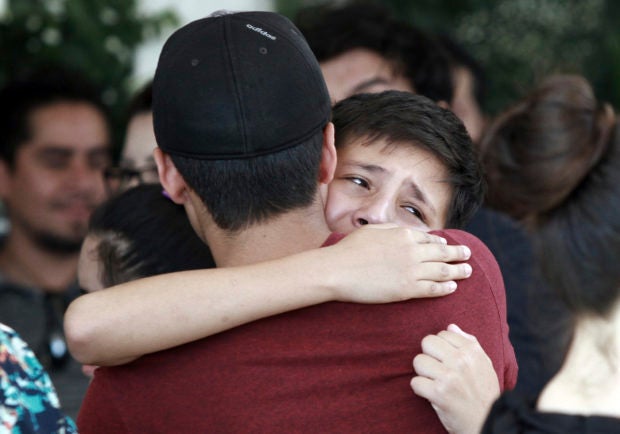 Youths comfort each other at the funeral of elementary school principal Elsa Mendoza, of one of the 22 people killed in a shooting at a Walmart in El Paso, in Ciudad Juarez, Mexico, Thursday, Aug. 8, 2019. Mexican officials have said eight of the people killed in Saturday’s attack were Mexican nationals. (AP Photo/Christian Chavez)

The manifesto included anti-immigrant and anti-Latino language similar to Trump’s.

Garcia said she has seen widespread anxiety among immigrants since Trump was elected in November 2016 and the angst after the shootings “has reached another level.”

Alexandro Jose Gradilla, a professor of Chicana and Chicano studies at California State University, Fullerton, said he and his wife, also a professor, “know anyone can look up a class schedule and start shooting.”

“White supremacists don’t see the difference between immigrants to fourth-generation Latinos,” he said. “They see brown.” 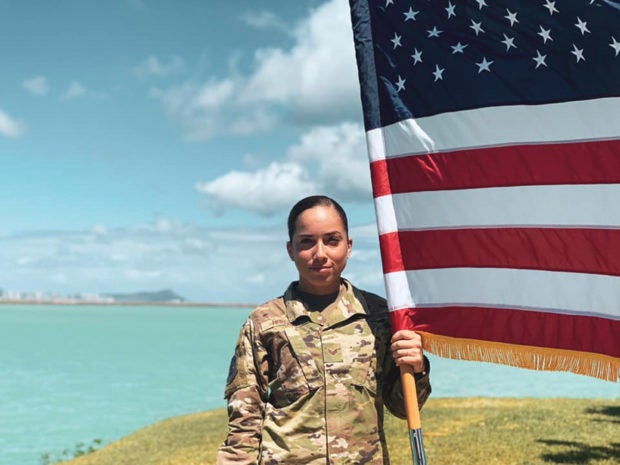 In June 2019, photo, U.S. Air Force Senior Airman Xiara Mercado stands at Pearl Harbor, Hawaii. A Facebook post by Mercado, of Puerto Rico, drew wide attention when she described a recent encounter at a Honolulu Starbucks with a woman who complained about her talking in Spanish on the phone. Mercado wouldn’t comment on recent anti-Latino violence that has terrified many Hispanics but insisted people should speak up when they suffer discrimination. (Xiara Mercado via AP)

Carlos Galindo-Elvira of the Anti-Defamation League in Arizona said that in the days after the El Paso shooting, the organization received calls from concerned Hispanics seeking information about white supremacy and the website where the manifesto was posted.

Some worried whether a mass shooting could happen in Phoenix, a city more than 40% Hispanic, said Galindo-Elvira.

“What I tell people is that we cannot live in fear, but we also have to be vigilant and be aware of the rhetoric and our surroundings,” he said.

He said information is important and since last year the league has been training officials at Mexican consulates across the U.S. about how to report hate crimes against their citizens amid the heightened anti-Latino rhetoric. 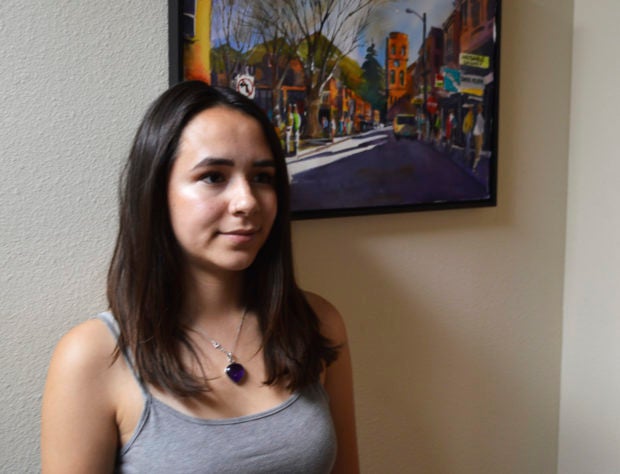 In this Aug. 9, 2019, photo, Jennifer Garcia, a University of New Mexico student originally from Mexico, speaks at the Center for Civic Policy in Albuquerque, N.M., about the fears surrounding Latinos amid the shootings in El Paso, Texas, and Gilroy, Calif. Garcia says many Hispanics feel like the U.S. is hitting a climax of anti-Latino hate. (AP Photo/Russell Contreras)

Still, Erik Contreras, 36, the grandson of Panamanian and Mexican immigrants, said the recent violence has left him nervously checking parking lots where he worries attackers could hit.

“The other day we went to the Oakland Zoo, and I found myself looking for the way out, just in case,” said Contreras, who works at a Union City, California, school and has three children. “I don’t want to live like that. This is our country.”

Otero, the poet, said she tries to make sense of the attacks by replaying facts in her mind.

“This is someone who drove nine hours to kill people like me,” she said of the El Paso shooter, holding back tears. “I don’t know what to make of that.”

In an effort to help, she is organizing a public reading by poets in Albuquerque to raise money for the families of the El Paso victims.

Flaviano Graciano of the immigrant advocacy group New Mexico Dream Team said activists are using the tragedies to organize residents. He says groups are planning forums to help educate Latino immigrants on their rights and how they can protect themselves against violence and anticipated raids.

Sometimes the best way to deal with anti-Hispanic bias is just to stand up to it, said Air Force Senior Airman Ciara Mercado. She grabbed attention on Facebook last month with her story of a woman giving her a hard time for speaking Spanish.

Mercado told The Associated Press that as a member of the military she couldn’t comment on the recent anti-Latino violence. But in her case, after suffering past discrimination, “I finally just decided to speak up.”

She said she remained silent when, years earlier, she was told to “speak American” during a stay in Michigan, then later when a police officer in Indiana questioned the authenticity of her Puerto Rican driver’s license.

But Mercado, 27, said she had enough when she was confronted by a woman as she chatted on the phone in Spanish with a friend from the U.S. territory at a Honolulu Starbucks. The woman told her speaking Spanish was “distasteful” and “does not represent America and that uniform you are wearing.”

In a July 17 Facebook post shared more than 48,000 times, Mercado said she told the women: “The only distasteful thing here is that you are clueless to your discrimination, please educate yourself. Have a nice day.”

The 15th Wing at Joint Base Pearl Harbor-Hickam, Hawaii, confirmed that Mercado is with the 18th Aeromedical Evacuation Squadron, and backed her up, saying: “The Air Force recognizes our strength comes from diversity.”