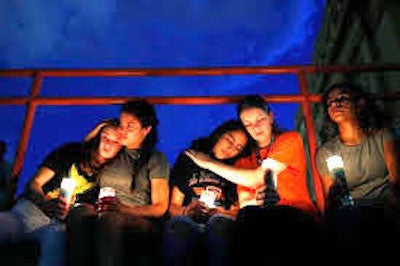 Mourners comfort each other during a vigil for victims of the shooting Saturday, Aug. 3, 2019, in El Paso, Texas. A young gunman opened fire in an El Paso, Texas, shopping area during the busy back-to-school season, leaving multiple people dead and more than two dozen injured. AP PHOTO

LOS ANGELES – The website used as a sounding board by recent white supremacist mass shooters is being run by a father-and-son team based in the Philippines.

The site, 8chan, is currently being operated by an Army veteran named Jim Watkins and his son Ronald, both of whom live in the Philippines, according to Los Angeles Magazine.

Meanwhile, its original creator, self-proclaimed “eugenicist” turned born-again Christian Fredrick Brennan, who also lives in the Philippines, has repeatedly said that the site should be shut down, according to The New York Times.

8chan logo; the site favored by white supremacist shooters is run by a father-and-son team living in the Philippines.

Hours later, at about 1 a.m. on Sunday, 24-year-old Connor Betts, a white male reportedly armed with a long gun and a high-capacity magazine, opened fire outside a bar in Dayton, Ohio, killing nine people, injuring 27 more. Six of the nine victims were black. The shootings followed another incident that killed 3 people in Gilroy, California.

In the Dayton mass shooting, a 2,300-word “manifesto” believed to have been posted online by Crusius prior to the El Paso terrorist attack cites a “Hispanic invasion of Texas” and suggests “getting rid” of immigrants in order to make “our” way of life more sustainable.

Crusius reportedly posted the diatribe to the online forum 8chan, a spinoff of 4chan that The New York Times describes as “a megaphone for mass shooters, and a recruiting platform for violent white nationalists.”

Both the shooter who perpetrated a mass killing in Christchurch, New Zealand, in March, and the shooter who killed one person and injured three others at a Synagogue in Poway, California, in April had posted hate-filled diatribes to 8chan before carrying out their crimes.

Since distancing himself from the website, its founder, Brennan, has repeatedly said that the site should be shut down. “Whenever I hear about a mass shooting, I say, ‘All right, we have to research if there’s an 8chan connection,’” Brennan, who lives in the Philippines, told The New York Times.

“It’s not doing the world any good,” he adds. “It’s a complete negative to everybody except the users that are there. And you know what? It’s a negative to them, too. They just don’t realize it.”

Brennan is hoping its current operators will pull the plug: “How long are they just going to allow this to go on?”