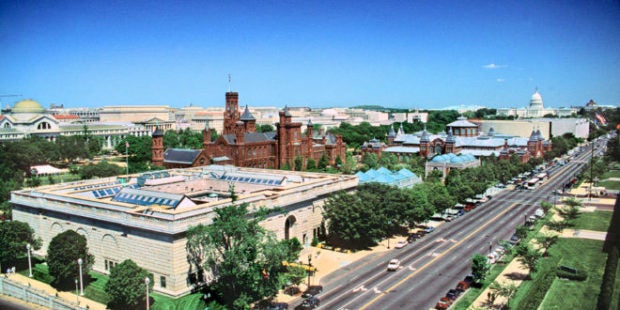 Smithsonian Mall: The proposed Asian Pacific American national museum could be part of the Smithsonian Institution.

WASHINGTON, D.C. — A national museum preserving the history, culture and accomplishments of Asian Americans and Pacific Islanders (AAPI) may be erected in Washington, D.C. in the future.

On July 31, U.S. Rep. Grace Meng (D-Queens) introduced new legislation examining the possibility of creating such an institution, which would be the first in the nation.

Entitled the “Commission to Study the Potential Creation of a National Museum of Asian Pacific American History and Culture Act,” the bill would create an eight-member panel – consisting of individuals with various expertise in museum planning or AAPI research and culture – to look into the viability of establishing such a facility in the nation’s capital. The measure would require this commission to:

The bill would also direct the commission’s recommendations to address whether the museum should be part of the Smithsonian Institution, the world’s largest museum and research complex. The commission would have 18 months to complete the full study.

“We need to weave the narrative of Asian American and Pacific Islander communities into the greater American story. I firmly believe the story of Asian Americans and Pacific Islanders is sorely misunderstood and creating a national museum would ensure that our experiences—both good and bad—are recognized by all Americans,” said Meng. “Museums are gateways for Americans and the world to see the United States’ rich history, challenges it overcame, and potential for greatness. Establishing this commission is the first step toward the creation of a national AAPI museum. I urge my colleagues to support this legislation.”

‘A gallery of our own’

On May 18, the Smithsonian Asian Pacific American Center launched a $25 million fundraising drive for permanent gallery space on the National Mall in Washington, D.C.

The Smithsonian’s initiative on documenting Asians in America started humbly enough two decades ago, with a borrowed exhibit in a borrowed museum wing and a tiny staff.

There was a National Museum of the American Indian attached to the Smithsonian, and progress was being made toward a museum on the National Mall celebrating African Americans’ history. But Asian Americans in the 1990s remained a largely invisible population, with few people represented in entertainment, politics, sports or business.

Those years were tough, said Franklin Odo, director at the time of the Smithsonian’s Asian Pacific American program.

“Whenever we needed to do a public lecture or exhibit, I had to go beg one of these other institutions to lend a space,” Odo said. “We had to really convince our colleagues that this was a field, this was a demographic … that needed to be recognized and needed to be held with some respect.”

If successful, an Asian American gallery could join museums and galleries dedicated to other historically underrepresented groups that have staked out space in a national park that is quintessentially American. Millions of people visit the National Mall every year to tour the White House, Lincoln Memorial and the treasures of the Smithsonian.

“The ability to have that visibility and recognition is so important,” said Lisa Sasaki, the center’s director. Despite temporary exhibits along the mall, she said, “there has never been a dedicated space where the public could consistently visit and find out about the history and culture of Asian Americans.”

Asian Americans are the nation’s fastest-growing minority and number about 20 million, or roughly 6% of the population. They come from more than 20 countries, with the largest populations from China, India, Vietnam, Philippines, Korea and Japan. They range from recent immigrants to descendants of laborers who migrated in the 19th century to build the Transcontinental Railroad and work sugar cane fields in Hawaii.

Museum presence is huge, says Laura Lott, president and CEO of the American Alliance of Museums.

“Museums preserve what’s important to society. They tell our stories, give historical context to contemporary issues and help us imagine a better future,” she said.

Odo, the former director, said he had one part-time staffer and no exhibits of his own when the program began in 1997, so he borrowed one from a Los Angeles museum for the program’s first installation, about the evolution of field lunches of Japanese immigrants in Hawaii.

He says the Asian American community has evolved enough as an identity to support a permanent gallery dedicated to their shared experience in America.

“I don’t know that we have an Oprah,” Odo said, referring to Oprah Winfrey’s charitable foundation, which donated $21 million for the National Museum of African American History and Culture. But “we have lots of people with immense means, so there’s no question in my mind we can do it.”

It’s too early to say how large a gallery would be or when it might be secured, but Sasaki says they are looking at several locations along the mall. The 4,500-square-foot (418-square-meter) Molina Family Latino Gallery is scheduled to open in the Smithsonian’s National Museum of American History in 2021.

Sasaki says $25 million is a fundraising goal for phase one of the project. Congressional approval is not required for a gallery within existing space, unlike the stand-alone 400,000-square-foot (37,160-square-meter) National Museum of African American History and Culture, which opened in 2016 .

The Smithsonian Asian Pacific American Center is conscious of showing not just how Asians came to America, but how they have shaped American history. An example is a pin marking a successful 1960s grape boycott led by Mexican American and Filipino American laborers, who chose to band together.

MORE STORIES
Rich Americans got richer despite pandemic
States with most people in Covid-linked financial hardship
Gulfstream Corp. delivers new aircraft that PH bought
Don't miss out on the latest news and information.