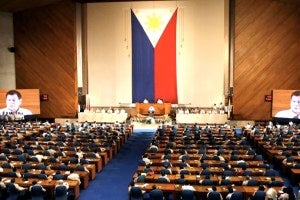 It seems that some members of Congress, in both the Lower House and the Senate, are also “Cafeteria Catholics.” They are those who claim their Catholic identity yet dissent from one or more Catholic doctrinal or moral teachings.

Not only do they refuse the Catholic teachings against birth control, divorce, the distribution of condoms in school settings, the death penalty, the termination of hardcore drug users and pushers and same-sex marriage, but they also advocate the opposite. They tireless promote them, even legalize and institutionalize them.

Pope Francis has reminded us that “obedience is freedom.” And obedience to Christ’s tenets can set us free (Morning meditation, April 11, 2013). However, this kind of holy advice seems to fall on deaf ears.

Same papal headache in the US

In 1987, Saint John Paul II opened up his heartache in his frank talk to the Bishops of Los Angeles. He said:

“A large number of Catholics today do not adhere to the teaching of the Catholic Church on a number of questions, notably sexual and conjugal morality, divorce and remarriage… (and) abortion… There is a tendency on the part of some Catholics to be selective in their adherence to the Church’s moral teaching. It is sometimes claimed that dissent from the Magisterium is totally compatible with being a “good Catholic,” and poses no obstacle to the reception of the Sacraments. This is a grave error…”

How does the Holy Father today solve the problem of the Catholic or Christian identity that is limited to Sunday observance but makes no dent on one’s moral practice and socio-political life?

Italian journalist Dr Eugenio Scalfari, in his personal interview with Pope Francis in 2013, made mention of the pitiful Christian condition in his own beloved nation:

“Even in Italy, which is called the Pope’s garden, according to some polls, practicing Catholics number only between 8 and 15 percent.”

Notwithstanding that it is where the Vatican is situated, considered to be God’s official business address on Earth and the Pope as Christ’s Vicar on Earth, Italy is also one of the places on the planet where lawmakers have legalized abortion, same-sex union, and divorce—tenets which are deemed to be the polar opposite of what the Church teaches.

Today, the top four Catholic nations in the world are Brazil, with an estimated 130 million Catholics; Mexico, with 90 million; the Philippines, with 75 million out of 100 million population; and the United Sates, with 65 million baptized Catholics. These numbers are huge, and people are asking the QQQQ or the “quintessential question of quality over quantity”: Is a bigger Church a stronger and a better Church?

The normal trend is that God’s people are growing where populations are growing: Asia; Africa; and Latin America. They are the same places where the Holy Father and the Bishops are challenged to react to QQQQ and do something about it. Again, is it okay that we increase in number with mostly part-time Catholics?

While most Filipino Christian lawmakers believe that abortion is immoral, there are roughly 500,000 abortions performed every year in the Philippines, and the sad truth is that the herbal abortifacients they use are purchased from around the Minor Basilica of Quiapo.

Vatican insider and journalist John L. Allen, Jr. once described the Christianity he saw in the Philippines (2004): “Parishes are often seen as sacramental filling stations—where people come for the Eucharist, baptisms, marriages and funerals, but little else.”

If these observations are true, painful as it may be, what now is the meaning of growth in Christianity without depth? What now is the value of being called the only Christian nation in the Far East? Yowzah, a true challenge for the Church!

That some Catholic lawmakers, though educated or graduates of Catholic colleges, find nothing wrong with death penalty, divorce, and wearing of condoms is indeed a growing headache for the Jesuit Pope.

In one morning Mass in the Vatican (2014), Pope Francis said, “Jesus never wanted the Church to be so rigid.” But His Holiness also complained that there are those who “call themselves Catholic but they have one foot out the door.”

Let’s go back to basics, Ombudsman Carpio-Morales offered a powerful message before lawyers on November 25, 2016. In reference to the contentious issue of EJKs, the basic tenets include God’s commandments, “You shall not kill, you shall not steal,” the Ombudsman insisted.

In contrast, after the House committee on Justice approved the reinstatement of the death penalty, or “rushed to approve,” as some citizens noted, House Speaker Pantaleon Alvarez apparently advised Filipino Catholics to convert to another religion should they be ostracized for supporting death penalty.

Cafeteria Catholics allege that the Catholic Church is antiquated like a Seiko watch in a digital age. Some bamboozled lawmakers and the “more enlightened” ones have reintroduced the old Roman idea of “democratism,” advocating the policy of vox populi, that everything has to be put into a majority vote, and that the Church should learn to do whatever is popular (or what the people like).

Vox populi vox Dei might sound ground-breaking when used in the Catholic context. But it could only make a “windsock” out of the Church that blows with the prevailing breeze, unfortunately confusing the truth with the majority opinion (to paraphrase Senator Jasper Irving in the 2007 drama film Lions for Lambs).

Cafeteria Catholics in Congress can tell the world what they choose to believe and pass laws as much as they want until hell freezes over. But the Catholic Faith remains, that is, Obedience to the Pope and Bishops is obedience to Christ, and there’s no other way.

­­­­­­­­­­­­­Jose Mario Bautista Maximiano, writer, educator, management consultant and motivational speaker, is the author of The Beginning and the End: A Theology of the Human Person and a dozen other books.