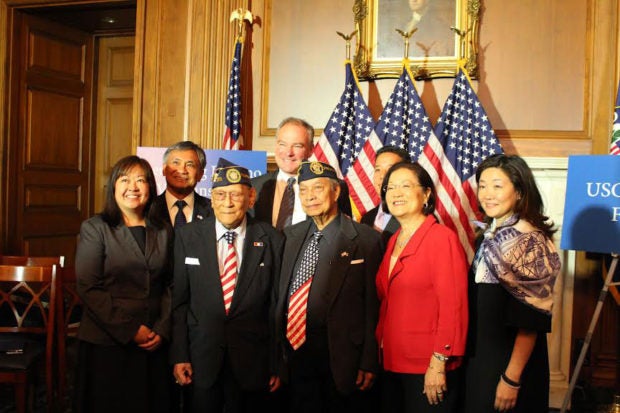 WASHINGTON, D.C. — Filipino World War II veteran Rudy Panaglima, 89, of Arlington, Virginia is grateful that two of his four grown children were able to come last year to care for him and his 86-year-old wife, Pura, who passed away recently after struggling with Alzheimer’s.

The Filipino World War II Veterans Parole Program (FWWVP) authorized by President Barack Obama in 2016 allowed Panaglima and 5,000 other veterans living in the U.S. to be reunited with family members who live in the Philippines. Panaglima was among 300 veterans who applied.

But when he learned that President Trump abruptly ended the program, Panaglima said he was “hurt once again,” recalling the 1946 Rescission Act that denied him and his comrades their rightful status and benefits. “We served under the American flag, and yet we continue to be treated as if our sacrifices don’t matter,” he said. “Who are we that the President should think less of us?”

Celestino Almeda, who turned 103 in June, is also “outraged” that “the President doesn’t seem to care that we put our lives on the line defending this country.” Although his family in Gaithersburg, Maryland, have looked after him over the years, it angers him that there are still several of his comrades who will spend the rest of their lives without loved ones caring for them.

“This is not right,” says 91-year-old Rey Cabacar of Ft, Washington, Maryland, one of the few remaining Filipino World War II veterans living in the Washington, D.C. area.  “We waited long for recognition, and it came only after many of our comrades have already died. We waited long for family reunification, and now many of them will die without their families on their side. This makes me very sad.”

Calling the Trump administration’s decision “unwarranted and extremely distressing for families of living WWII veterans,” FilVetREP National Chairman Maj. Gen. Antonio Taguba (Ret) notes that “this is another broken promise against our veterans. It is senseless and totally unacceptable to terminate a program that would have allowed children to rejoin their parents. It is patently arbitrary and unjust to target aging and ailing veterans who only have a few years to live.”

Taguba led the effort in 2017 to secure legislation awarding the Congressional Gold Medal to Filipino and American World War II veterans. “Although it was largely a symbolic act, it was nonetheless  historic in the way it honored their service and sacrifice,” Taguba said. “But the ending of the family reunification program, like the 1946 Rescission Act, deprives the few veterans who are still alive some measure of dignity and pride in their sunset years. For their duty to country, they don’t deserve this. It is an egregious act of injustice and discrimination and unwarranted at best.”