Yet five years after the black 18-year-old was fatally shot by Ferguson police officer Darren Wilson on a steamy August day, racial tension remains palpable and maybe even more intense. From the march on Charlottesville to President Donald Trump’s tweets attacking congressional Democrats of color and Colin Kaepernick’s kneeling at NFL games, the country often seems more divided than ever.

Ferguson “drew attention to the practices of police violence and a lot of the stereotypes and viewpoints that people had about black Americans,” said Adia Harvey Wingfield, a Washington University sociologist and expert on race relations.

“I wish I could be a little more optimistic about its overall implications, but I am not sure yet that there is too much reason for optimism. I think that we’re in a place where we kind of sees some progress coupled with some steps backward.” 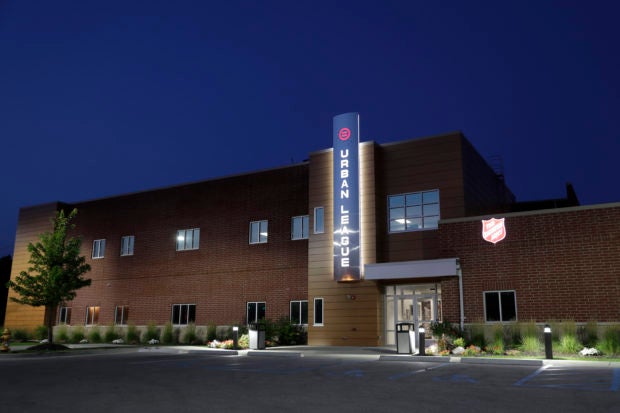 In this July 24, 2019, photo, the new Urban League building stands on the site of the former QuickTrip convenience store that was looted and burned in the unrest after the death of Michael Brown five years ago in Ferguson, Mo. (AP Photo/Jeff Roberson)

The suburban St. Louis community has changed, though to some, not fast enough. The government for the city of 21,000 is now more reflective of its populace, which is two-thirds black. Four of the six City Council members are black, compared with just one in 2014. The police force that was overwhelmingly white in 2014 is now far more diverse.

The town has seen sweeping changes in the way the Police Department and municipal court operate. An ongoing agreement with the Justice Department requires even more reforms, and the monitor overseeing the agreement wants the pace to accelerate.

Behind all of that, a father still grieves. 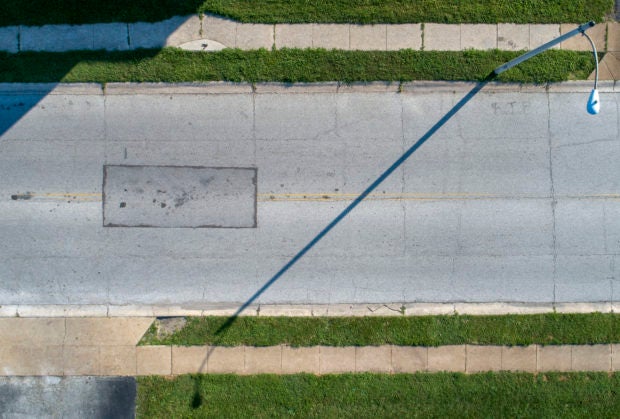 This July 27, 2019, photo shows where Michael Brown was killed, marked by the rectangular box in the middle of Canfield Drive, in Ferguson, Mo. Brown was shot and killed Aug. 9, 2014, by Ferguson police officer Darren Willson. His body lay in the street for hours as police investigated. At the family’s request, that section of asphalt was removed and repaved, leaving the scarred street. (AP Photo/Jeff Roberson)

“We share the same name,” Michael Brown Sr., 41, said of his son. “We have the same blood. He has no voice. I have the voice for him so I have to keep pushing.”

The cascade of events on Aug. 9, 2014, began with a chance encounter on the street.

Wilson had just left a home after a call about a sick baby when he drove by Brown and a friend, who was walking in the middle of Canfield Drive, a busy two-lane street. Wilson told them to use the sidewalk. 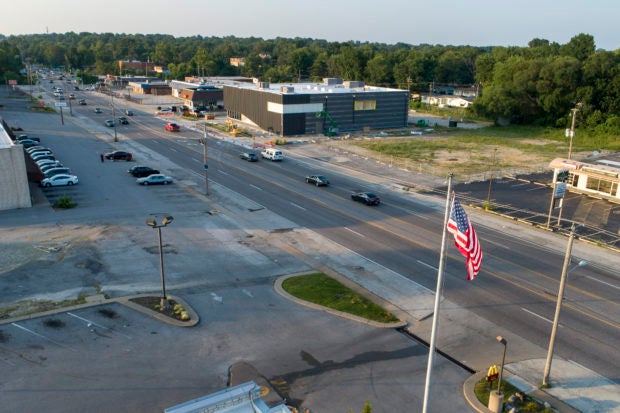 In this July 24, 2019, photo, cars move along West Florissant Avenue, the scene of nightly protests in the weeks following the shooting death of Michael Brown by a police officer in 2014, in Ferguson, Mo. The road is much quieter today. (AP Photo/Jeff Roberson)

Words were exchanged, then Wilson noticed a pack of cigarillos in Brown’s hand. A radio dispatch had just reported the theft of cigarillos from a market. Wilson confronted Brown, who was unarmed.

The situation escalated in a flash. Brown reached into Wilson’s SUV, and a fight began. Wilson’s gun went off. Brown ran. Suddenly, the 6-foot-4, 290-pound teenager turned back toward Wilson, who later told investigators that Brown looked “psychotic” and “hostile.”

Wilson fired several shots, but Brown kept coming, the officer said, until the final shot to the head felled him. 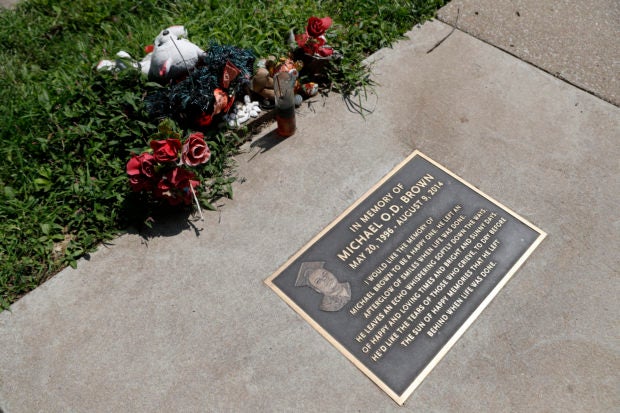 In this July 25, 2019, photo, flowers, and other items lay near a memorial plaque in the sidewalk near the spot where Michael Brown was shot and killed by a police officer five years ago in Ferguson, Mo. (AP Photo/Jeff Roberson)

Some people in the Canfield Green apartment complex initially said Brown had his hands up in surrender, stories that quickly spread on social media. Brown’s bloodied body lay on the street in the August heat for four hours, inciting even more anger.

The next night, as thousands attended a prayer vigil on Canfield, a much larger and angrier crowd gathered on nearby West Florissant Avenue.

A QuikTrip convenience store was set on fire and soon, dozens of other businesses were looted, damaged or destroyed. Rocks and bottles were hurled at police officers. Police were so outnumbered they could only stand and watch.

Subsequent protests were met with a far larger police presence. Officers from throughout the St. Louis region showed up in armored vehicles, wearing riot gear and carrying military-style weapons. 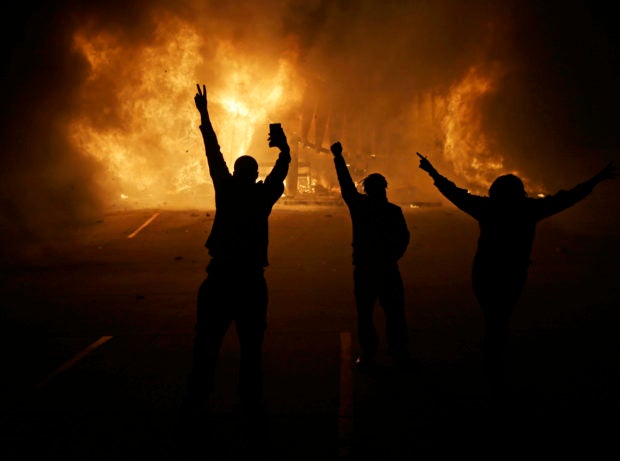 FILE – In this Nov. 25, 2014, file photo, people watch as stores burn in Ferguson, Mo. Michael Brown’s death five years ago at the hands of a white Missouri police officer stands as a seismic moment of race relations in America. (AP Photo/David Goldman, File)

Chris Phillips, a filmmaker who lived in Canfield Green at the time, was among many whose live stream video captured images of police using pepper spray, tear gas and batons in their clashes with protesters.

“I just think that the big presence of heavy artillery, with that kind of response, really upset people,” said Phillips, now 38. 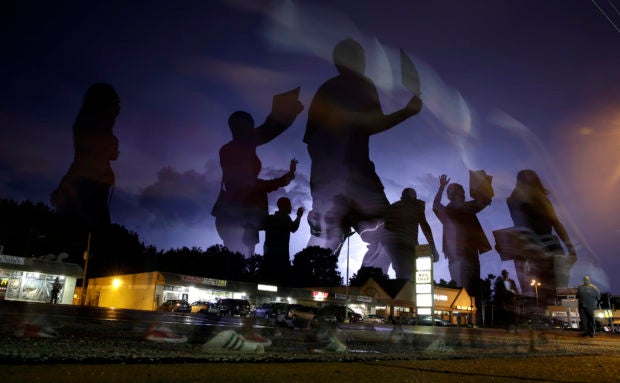 FILE – In this Aug. 20, 2014, file photo, protesters march in the street as lightning flashes in the distance in Ferguson, Mo. Michael Brown’s death on Aug. 9, 2014, at the hands of a white Missouri police officer stands as a seismic moment of race relations in America. The fledgling Black Lives Matter movement found its voice, police departments fell under intense scrutiny, progressive prosecutors were elected and court policies revised. (AP Photo/Jeff Roberson, File)

The anger in Ferguson went much deeper than Michael Brown’s death. Racial tension that simmered for decades began to boil.

The following spring, on March 2015, the Justice Department also declined to indict Wilson but issued a report citing racial bias in Ferguson’s policing. The report also found that the municipal court used ticketing and court fees to generate revenue. Police Chief Tom Jackson was among the top leaders who resigned.

A year later, the city council reached an agreement with the Justice Department requiring massive reforms overseen by a court-appointed monitor. That process is ongoing.

Among the changes: About half of the police force is now made up of black officers, and they’re led by a black chief, Jason Armstrong.

The problem is finding enough officers. Ferguson has 13 vacancies. Many departments across the country face similar shortages, but Mayor James Knowles III said the challenge is especially daunting in Ferguson, where police remain under a microscope.

“There are a lot of people, especially some of the best and brightest, who might have thought they may want a career in policing,” Knowles said. “They’re going to ask themselves the question, ‘Do I want to go through this, to put my family through this?'”

Ferguson has seen a spike in homicides nearly 30 in the past five years in a town where killings were once uncommon. Knowles believes criminals have become more brazen knowing the police are hesitant to make traffic stops the so-called “Ferguson effect.”

“When you’re not pulling people over, you’re not getting these guns off the street, you’re not seizing contraband and illegal weapons,” Knowles said.

Not everyone is sure that Ferguson is embracing change. Many black residents were angered when the longtime finance director, Jeffrey Blume, was appointed interim city manager earlier this year. The Justice Department report singled out Blume’s role in encouraging traffic fines as a revenue source.

“As a community, we hear you loud and clear: You don’t care,” Felicia Pulliam, 54, told the city council last month.

Knowles believes the agreement with the Justice Department sometimes hinders, rather than promotes, progress. He said the city has paid out more than $600,000 in monitor fees, and the hundreds of thousands of dollars spent on legal costs would be better spent on improving policing.

“Instead of spending money on a $300-an-hour law firm, why shouldn’t I be spending that money on sending those officers to additional training?” Knowles asked.

The city’s monitor, Boston attorney Natashia Tidwell, gave Ferguson mixed reviews in a June report. She lauded the city for implementing a police use-of-force policy and cited progress in the use of body-worn and in-car cameras. The review also gave generally high marks for municipal court reforms.

Ferguson is starting to look different. On West Florissant, the burned-out QuikTrip is long gone, replaced with a new $4 million building housing the Urban League of Metropolitan St. Louis. The Boys & Girls Clubs of Greater St. Louis is building a teen center nearby, and a large new health care facility is also planned. Still, vacant lots and empty storefronts abound.

Susan Ankenbrand and her husband moved their family to Ferguson 44 years ago, at a time when other whites were heading the other direction because they wanted to raise their kids in a diverse community. She acknowledged that the events of 2014 drove a racial wedge through the heart of Ferguson, leaving a wound that’s a long way from healed.