Fear on Wall Street of an Economic Slowdown

U.S. stocks fell broadly in midday trading Wednesday as central banks around the world cut interest rates and increased fears that global growth is being crimped by the U.S.-China trade war.

Every major U.S. index fell and put stocks back on a course for losses after briefly breaking a six-day losing streak on Tuesday. The losses eased as the day progressed, though investors remained in a defensive mode and headed for relatively safe holdings.

Bond prices spiked again, sending the yield on the 10-year Treasury down to 1.64% from 1.74% late Tuesday, a large move.

Yields are at their lowest level in nearly three years. That benchmark yield has retreated from its recent high of 3.23% last November as expectations of economic growth have steadily faded. 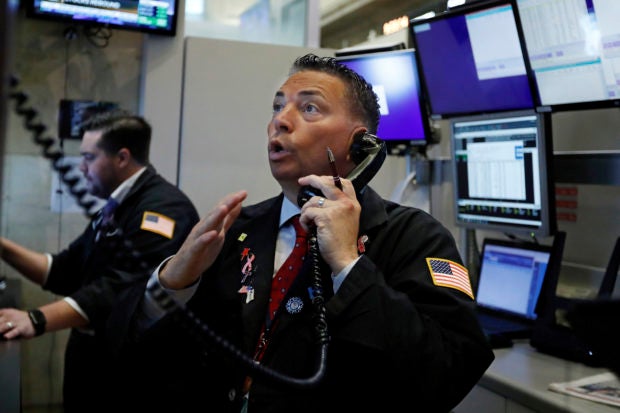 “The Treasury market is trading much higher this morning as investors continue to seek a safer haven, completely unsure as to what may happen next,” Kevin Giddis, head of fixed income capital markets at Raymond James wrote in a report.

Banks sustained some of the worst losses. Lower bond yields mean lower interest rates on mortgages and other kinds of loans, which mean lower profits for banks. JPMorgan Chase fell 3.1% and Bank of America fell 3.3%.

Safe-play stocks, including consumer staples and utilities, held up far better than the rest of the market.

China on Monday allowed its currency, the yuan, to weaken against the U.S. dollar in response to U.S. threats to add more tariffs to Chinese goods.

China stabilized the yuan on Tuesday and that helped lift U.S. stocks a day after they endured their worst day of the year. The volatile trading has already put a dent in the major indexes yearly gains. The S&P 500 is down 3.8% for August.

Central banks in New Zealand, India, and Thailand cut key interest rates on Wednesday and investors around the world fear that the escalating trade war between the U.S. and China will severely damage global growth.

After the surprise interest-rate cuts, bond yields sank around the world as investors scrambled for safety. They also poured into gold, which jumped to its highest price in more than six years.

“There is almost a paranoia amongst central bankers to avoid any potential financial hiccups that might hurt the real economy and cause a slowdown,” Jefferies strategist Sean Darby wrote in a report.

U.S. stocks have been on a wild ride since Jan. 22, 2018, when Trump first imposed tariffs on solar products and washing machines to help U.S. manufacturers, but they’re virtually back to where they started.

Since Trump tweeted in March 2018 that “trade wars are good, and easy to win” after raising tariffs on steel and aluminum, the S&P 500 is up 6.3%, though that gain has nearly halved in the last couple weeks as worries about the trade war have surged.

A key gauge of fear in the marketplace surged 6.2%. The VIX index, which measures how much traders are paying to protect themselves from swings in the S&P 500, was still below where it was at the start of the year when recession fears were surging, but it’s close to its highest level of the year.

European and Asian indexes were mixed.

The entertainment company said underperformance from its Fox movie and TV studio helped weigh down the fiscal third-quarter financial results. It bought Fox’s entertainment business in March for $71 billion.

Match Group shares jumped 25.2% after the operator of Tinder, OkCupid and other dating sights beat Wall Street’s second-quarter earnings forecasts. The company reported a surge in Tinder subscribers and raised its revenue forecast for the year.

Drugstore operator CVS Health rose 6% after swinging to a second-quarter profit and handily beating Wall Street forecasts. The company attributed part of the gains to health insurer Aetna, which it bought for $69 billion in November.