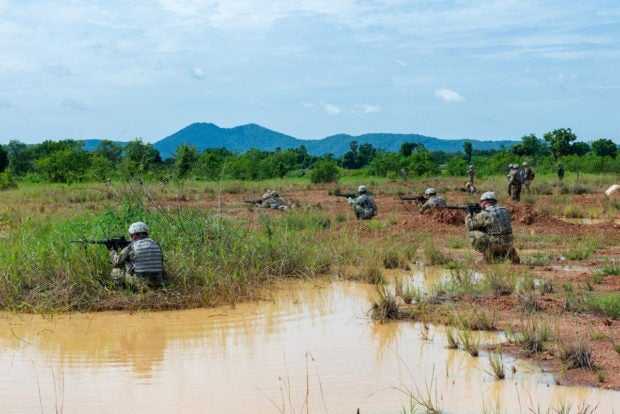 HUNTSVILLE, Alabama — The U.S. Army’s major exercise in the Indo-Pacific theater in 2020 will focus on a South China Sea scenario, according to the commander of the U.S. Army in the Pacific.

Gen. Robert Brown, the commander of U.S. Army Pacific, told Defense News that the service is funding two major exercises in FY20: one in the Pacific and one in Europe.

The South China Sea has been a hotbed of contention for several years. China has laid claim to the area, building artificial islands in disputed waters with military facilities on them, with the country claiming it has the authority to restrict international navigation.

The exercise is fueled by a rising China, characterized in the National Defense Strategy as a long-term, strategic competitor of the United States.

The NDS lays out a world where great power competition rather than counterterrorism will drive the Defense Department’s decision-making and force structure.

While the U.S. Army has 85,000 permanently stationed troops in the Indo-Pacific region and is already conducting exercises such as Pacific Pathways with allies and partners, the service is aiming to practice rapid deployment from the continental United States to the Pacific.

The plan is to bring over a division headquarters and several brigades over the course of a 30- to 45-day period along with their enablers, Brown said.

“They will get the challenge of coming to the Pacific with the Pacific-assigned forces already there,” he said, “and we won’t go to Korea, we will actually go to a South China Sea scenario where we will be around the South China Sea; and another scenario we can do that is the East China Sea.”

The exercise will consist of many things the Army has not practiced at such a large scale, Brown said. Forces will be in countries like the Philippines and Thailand, and they will likely work with other countries like Malaysia, Indonesia and Brunei.Subscribe