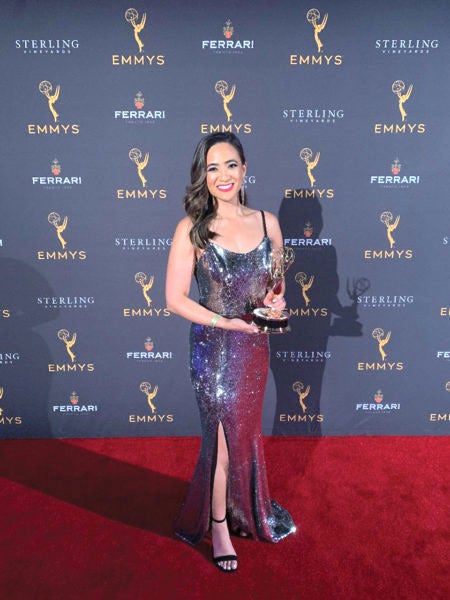 LOS ANGELES — A Filipina American meteorologist took home an Emmy at the 71st Los Angeles Area Emmys for her coverage on plastic in the ocean.

Shanna Mendiola, the meteorologist for NBC4 Southern California’s weekday morning newscast “Today in LA,” received the Environment News Story award for a two-part report on “Plastic and Our Oceans.” She won alongside Andres Fernando Pruna, who served as the cameraman, editor, and producer for the report.

The report investigates why 88% of the world’s oceans have plastic debris and why the problem is escalating. The special series came about as a “responsibility to raise awareness for environmental issues that affect our planet” outside of her day-to-day meteorology forecasts.

“Sadly, you don’t have to go very far to find trash on our washing up on Southern California beaches, or even see it in the water. Cities are making small changes like banning plastic straws and bags, but it’s not enough. I hope the story my producer and photographer, Andres Pruna, and I put together educates the public about the issue and gets more people talking about how we can work together to make a change,” Mendiola told the Asian Journal in an email.

Mendiola has been the morning meteorologist since March 2017 and joined NBC in 2014, which has given her opportunities to fill in for Al Roker on the “Today” show and other national broadcasts. She also worked for TV stations in Denver, San Francisco, and Oregon. 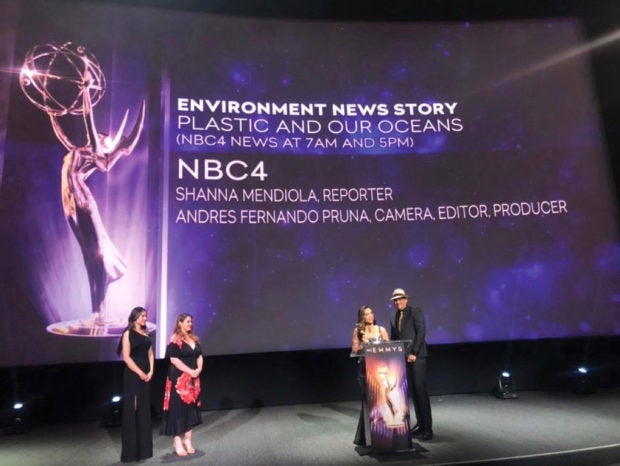 NBC4 meteorologist Shanna Mendiola and Andres Pruna (right) receive their Emmy for a two-part report on “Plastic and Our Oceans” on Saturday, July 27 at the 71st Los Angeles Area Emmys. CONTRIBUTED

She previously told the Asian Journal that she was inspired to become a meteorologist at the age of 12 during a “take your daughter to work day” event, where she heard a news anchor speak.

“I’m overwhelmed with gratitude and honored beyond words to receive this award,” Mendiola said. “There are very few women and women of color as a whole in the broadcast meteorology field, and to be Filipino American and win this Emmy — it’s a win for the community and hopefully inspiration for many to follow!”

This marks Mendiola’s second Emmy, but first solo win. She was part of the NBC4 weather team that won an Emmy in 2016 for its El Nino coverage.

The awards were held at the Television Academy’s Saban Media Center in North Hollywood, California on Saturday, July 27.