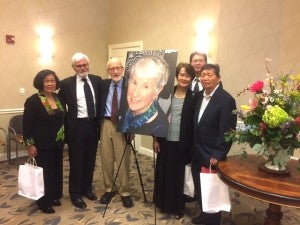 CHICAGO–Ellen Burbach-Browne and her husband, William, of Evanston, Illinois, are known for their philanthropy, having given generously to efforts to build housing for victims of Typhoon Haiyan. Ellen Burbach-Browne, 83, died last April 22.

The Brownes’ donations were channeled through Gawad Kalinga (GK); at the time of Ellen’s passing, GK Advocate Josie Disterhoff said that the couple’s donation stood at more than $30,000. Disterhoff also said a community center at a GK Village in Tolosa, Leyte, will be named after her.

Several houses built for the victims of the 2013 super-typhoon Haiyan were made possible through the couple’s generous giving. Disterhoff and Ellen Browne were scheduled to visit the GK Village this month, but her cancer, which was diagnosed last October, spread rapidly leading to her passing late April. Ellen and William had been married for 47 years.

No fewer than 200 of her friends, relatives, fellow workers and acquaintances touched by her generosity gathered at the Three Crowne Park in Evanston on May 9 to celebrate her life. Six persons shared moving eulogies that gave an inspiring glimpse on the Brownes’ life of giving, compassion and care.

Also surviving her are her sisters Mary Schiellack and Anne Barg Costello (Robert). In lieu of flowers, her husband requested that donations be made to the Greater Chicago Food Depository (www.chicagosfoodbank.org) or the Southern Poverty Law Center (www.splcenter.org).