Knowing that the census guides how much money a community gets from the government is the most important reason for people to respond to the census, according to results from a 2018 Census Bureau survey.

Thirty percent of respondents specifically said the most significant reason to reply to the census is the knowledge that census data are used to guide public funding decisions.

Another 17% said it’s that it benefits their community’s future, while 15% said the most important reason is that it provides information for local governments.

This mismatch between not knowing that the results of the census are used by communities to make funding and planning decisions, while, at the same time, finding it to be a compelling motivator was just one insight from the 2020 Census Barriers, Attitudes, and Motivators Study (CBAMS).

Why this new survey is important

The purpose of the 2020 CBAMS was to understand the attitudes toward the census, barriers that may inhibit participation, and what motivates people to respond.

While the Census Bureau surveyed the public’s attitudes and knowledge before the previous census in 2010, the 2020 version of this study used a much larger survey sample.

It allowed the Census Bureau to gauge the attitudes and motivators of smaller populations, such as members of the LGBTQ community, which provided more data insights for the development of the communications campaign.

The new study also supplemented survey responses with focus groups of individuals who were not included in the survey sample (such as people living in Puerto Rico) or who may not have responded in large enough numbers to produce valid statistics (such as American Indians, Alaska Natives or Native Hawaiians and other Pacific Islanders).

The survey mailed invitations to 50,000 households across all 50 states and the District of Columbia, and conducted the research with the help of advertising partner VMLY&R between February and April 2018.

The 61-question survey was available in English and Spanish, and — when the data were weighted — the response rate was about 35%, or nearly 17,500 households. 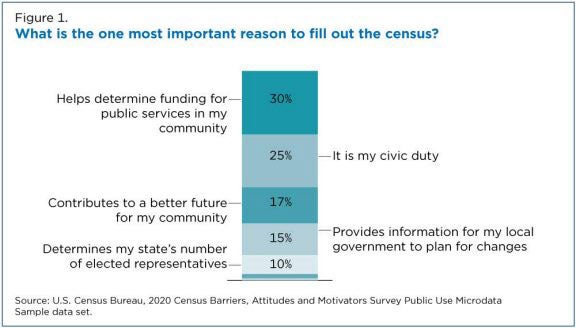 In addition to the survey, 42 focus groups (with around 300 participants) were completed in 14 locations across the United States, including 16 focus groups of people who do not speak English.

What did we find and what are we doing?

As mentioned earlier, we uncovered low knowledge about the use of census data to determine community funding, but it was the number one motivator. That’s why Census Bureau messaging will stress how the census directly benefits local communities, now and into the future. 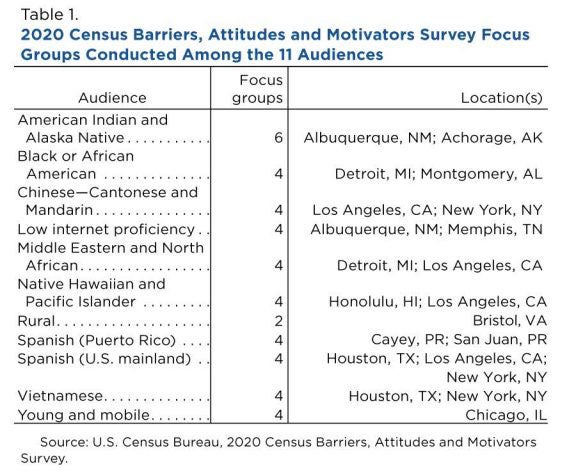 Other findings and how the Census Bureau is responding:

Census Bureau messaging will frame census participation as important and desirable, and these messages will need to resonate with young people.

The Census Bureau will frame privacy and confidentiality in a variety of ways. There will be early educational messaging on the Census Bureau’s data protection and privacy policies, stressing that individual information will not be shared with any government law enforcement agencies.

It will rely heavily on partnerships because results from the focus groups shows that people are more receptive to data confidentiality messaging when it comes from trusted voices.

The focus groups suggest that encouraging response from trusted voices in the community may increase participation among people with the greatest distrust in government.

Findings from this study inform and inspire the creative strategy for the communications campaign. Creative strategists are using the survey to identify different demographic groups’ motivators and barriers to self-response in order to target messaging that resonates with specific audiences.

They are also using the survey to identify misconceptions related to the census. Focus groups provided ideas that can potentially combat misconceptions and barriers to participation.

In addition to tailored messaging, the Census Bureau is using the results of the 2020 CBAMS combined with the outputs of other 2020 Census communications research efforts to develop media plans to guide and justify messaging content and media buys.

All findings are available to partners and stakeholders to help them communicate about the census among diverse audiences across the country. This research will help provide the foundation of the communication campaign with the ultimate goal of increasing self-response to the 2020 Census while still encouraging cooperation with census takers.

Gina Walejko is chief of the Response and Measurement Branch in the Census Bureau’s Decennial Statistical Studies Division. Monica Vines is the lead researcher for communications in the Communications Directorate’s Center for New Media and Promotion.