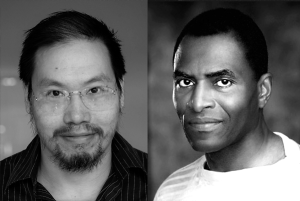 Ong’s play on the soul and jazz poet, spoken-word artist and musician who explored blues and rap will premiere at Magic Theatre here in June.

The theater group’s statement says the play’s exploration of “questions of legacy, art, hope, and redemption drives this funny and gut-wrenching exchange.”

Playing Scott-Heron is actor Carl Lumbly, known to TV viewers as Marcus Dixon on ABC’s “Alias” and the voice of Martian Manhunter on the animated series “Justice League.”

Magic’s artistic director Loretta Greco helms the production. “‘Grandeur’ is a stunning and powerful ride; both wickedly funny and poignant in its social relevance, we are honored to be premiering it,” she says.

“Han has doggedly trailed and lovingly reassembled another artist of color’s rise and fall in order to evoke perspective on some of life’s larger questions and to leave a more intricate and complicated tale which asks us to reconsider what constitutes a man’s worth.”

Ong’s playwriting earned him the MacArthur Fellowship in 1997. The grant is awarded to individuals who’ve shown “extraordinary originality and dedication in their creative pursuits and a marked capacity for self-direction.”

“It’s exciting, nervous-making,” Ong says of his reunion with the Magic Theatre group. “In their season brochure, they called my production a ‘homecoming’ and that feels right.”

Ong says that, like nearly all his plays, he wrote this one “on spec.”

“Meaning I wrote it because I wanted to write it, not because there was an assured production at the tail end of the process.”

He says something about Scott-Heron touched him deeply. “I believe he’s become a forgotten man, despite his wizardry and his mastery as both writer and musician.”

Scott-Heron had consumed years of Ong’s thoughts. “I’d been thinking about him a lot in the year just before he died. This was because, as in my play ‘Grandeur,’ he released a new album.”

The song “The Revolution Will Not Be Televised,” recorded in the 1970s, shot Scott-Heron into the spotlight. His “I’m New Here” was released in 2010.

“It was his first album in 16 years, which begged the question: where was he all these years?”

The singer died in 2011. “He passed away too young at 61. But then again, that body and that mind had a lot of mileage, including from drug addiction. [His death] made him a fixture in my thoughts and imagination.”

Ong wrote the play in 2014 and the following year, playwright and novelist Jessica Hagedorn, whom Ong considers a great friend, asked to read it.

“She loved it so much she decided to pass it on to Loretta Greco, and Loretta, in turn, loved it. I think within one year, she had committed to producing it at the Magic.”

Magic Theatre staged Jessica Hagedorn’s “Dogeaters” last year and is slated to stage her “The Gangster of Love” in 2018. Both plays are adapted from her novels with the same titles.

Ong was born in the Philippines and moved to the US in his teens. He has written plays such as “Swoony Planet,” “Airport Music” and “Play of Father and Junior.”

His play “Middle Finger” was staged in Manila with a Filipino translation by theater group Tanghalang Ateneo in 2014.

He has also written novels Fixer Chao, a Los Angeles Times Best Book of the Year, and The Disinherited.

In 2014, his first play in more than a decade, “Chairs and a Long Table,” was staged by Ma-Yi Theater in New York.

“That was my first production after a long voluntary lay-off from the theater. I believe I was gone somewhere between 12 to 15 years.”

Theatergoers who follow Ong’s output may have more to look forward to. “With ‘Grandeur’ at the Magic, it feels like I’m ‘back,’ that it’s not just a one-off deal,” he says.

There will be a salon with Ong and Greco after the June 4 matinee show.